It was 32.4 C in Vancouver at the heat dome’s peak, but well into the 50s in Eddie Lee’s kitchen. Despite the temperature, he wore long pants as he plunged baskets of battered chicken into the deep fryer. Working with boiling oil, he said, “you don’t want to be wearing shorts.”

At Rib & Chicken on the city’s east side, hundreds of orders beamed in via apps during the unprecedented stretch of hot weather. Vancouverites didn’t want Colonel Sanders’ typical KFC; they wanted Korean fried chicken. The dish is enjoying its time in the sun, especially as the pandemic has made taking out an order so much easier than dining in.

The chicken is saucy, yet by some miracle, the sauce is absorbed into the crispy skin while maintaining a dynamic crunch. It’s alchemy. You can have it dressed in a glaze of sweet soy, but if you want some heat, get it dressed in a gochujang-based chili sauce. The boldest opt for the bright red “volcano” variety. A signature side of pickled radish, with its cool refreshing crunch, is there to extinguish the burn.

Diners have asked Lee why kitchens don’t have air conditioning. It’s not a money problem, he tells them. “It doesn’t matter whether it’s fried chicken or burgers, or filet mignon, or someone’s butter-basting a duck: kitchens are designed to be very warm.” Even in a heat wave, customers want hot food, not food that’s been chilled by A/C.

It can’t be helped that kitchens are, in his words, “hell pits.” The very refrigeration units that keep ingredients cold spit out hot air.

“It’s not just our equipment that’s getting overheated, it’s the people as well,” said Lee. When the hot weather hit, he made sure staff took breaks and drank more water, especially those who are older and do heavy duty work on their feet for hours. He thinned out the shifts so that those who could afford to take a day off could do so, away from the kitchen with its deep fryer, grill and six burners. “When you spell it out, it’s all common sense. But when it gets busy, it can be hard to do.”

Rib & Chicken opened up at Renfrew and First Avenue in the middle of the pandemic, moving into what was the Osteria Napoli restaurant and swapping out the pasta for Korean fare. Aside from the fried chicken, there are the titular ribs, grilled and served on hot plates with cheese, and homey stews of seafood and soft tofu.

A few remnants of that old school, east side osteria linger inside Renfrew Rib & Chicken: decorative jumbo wine bottles and generic paintings of the Italian countryside. There’s something Napoleonic about it, especially as Korean fried chicken conquers the Lower Mainland.

American troops first introduced deep-fried chicken to South Korean cities during the Korean War. It was a novel way of eating the bird for Koreans more used to soups like samgyetang, whole chicken with ginseng, jujube dates and sticky rice. But the American novelty stuck around, with various entrepreneurs and chicken chains evolving the recipe over the decades.

In the 1980s, one of them, Yoon Jonggye, introduced the signature sauces, a way to tame the crispy skin that was scraping diners’ palates. It was called yangnyeom chicken, meaning seasoned chicken. When the financial crisis hit Asia in 1997, laid-off workers turned to frying chicken, and struck gold. A 2019 count by Korea Economic Daily found a staggering 87,000 fried chicken restaurants in the country, more than twice the number of McDonald’s restaurants worldwide. That year, a hit movie called Extreme Job was released, which told the fictional story of a Seoul narcotics squad going undercover by opening a fried chicken restaurant across the street from a gangster hideout.

As early as the 2000s, Korean fried chicken had its homecoming in North America, and western eaters love it too — foreign, yet familiar. In the Lower Mainland, Zabu, which opened on Robson Street in 2011, claims to be the first. Many others followed: Damso, Cocoru, Chicko and even brands imported from Korea, bb.q and Nene. Rib & Chicken made its way into Vancouver by way of Langley, where many Korean families start their Canadian lives in the suburbs. It now has six locations, from Harrison Hot Springs to one in Vancouver’s Marpole, which opened in the middle of the heat wave. 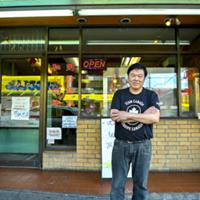 In the Pandemic, ‘Gain Wah’ Keeps Dishing Out Chinatown Classics

Lee, who grew up in Langley, came into the chicken business by way of fine dining. “I was one of those kids in high school who watched Food Network and fantasized about being a cook. I wanted to be the next Gordon Ramsay.” He started his career at VanDusen gardens’ Shaughnessy Restaurant, and later cooked for some of the city’s most critically acclaimed eateries: L’Abattoir, Campagnolo and Mackenzie Room.

But after 13 years, something didn’t quite satisfy Lee. He liked the education and experimentation in the kitchens he worked in, especially sourcing local B.C. ingredients. But crafting pricey menus with dishes rooted in European cuisine didn’t “click” for him. “I’m Korean, and it wasn’t something I related to because it’s not something my mother or grandmother cooked when I was a child,” he said. “I started to feel a void in my heart.”

When the pandemic hit, Lee had an idea. “Maybe I should take a few months off and have a chill job. So I decided to go fry chicken.”

Lee, now the Rib & Chicken company’s general manager, isn’t surprised how the bird has taken off, especially with COVID-19 associating dining in with danger. “It’s something that you can take out very easily, and it’s very approachable and casual,” he said. “I think that’s where the market is headed, more affordable and simple food that people can relate to.” Rather than having a small handful of Canada’s top 100 restaurants, he believes having more young chefs introduce new flavours at affordable prices makes for a more vibrant food scene in the city.

Cooking for the masses earns a different kind of attention, with a focus on chasing hype. Lee is aware of the listicles out there, the ones with titles like “Best fried chicken in Vancouver you need to try at least once”, and the foodies who obsessively hunt down and rank all the new Korean fried chicken places in town.

“It’s a blessing,” he said of the appetite, “and I’m sure it has a lot to do with Korean culture having such a big influence on the West.” While Lee does have philosophical inclinations, he says he’s a restauranteur first and foremost. “I spend more time on making better fried chicken and selling more fried chicken than why people are searching for it.”

After a short break in the A/C, he puts on his mask and returns to the hell pits.