At the end of my time in youth hockey, I decided to play a year with an under-21 recreational team. Shortly before registration ended, two novice players joined our team. They were turbaned Sikhs who spoke with a slight but perceptible accent.

At first, their race wasn’t mentioned. However, things changed once it became clear they were the worst two players on the team and frequently missed games and practices. Suddenly, their race became a topic of conversation.

This was a recreational team, explicitly open to anyone. Moreover, the team was not racially homogenous before they arrived: 10 of its 17 other players had at least one, if not two, racialized parents. The difference was that the other racialized players fit in seamlessly with the “hockey culture,” each with over a decade of hockey experience.

When these two players weren’t present, they were often referred to as “the brown guys.” While no one was openly hostile, others made no efforts to include the new players in locker room conversation. When our team finished first in the league and qualified for the championship playoff, a group of players wanted to exclude them from the final game, pointing out that the two had missed many practices and games and hadn’t really committed to the team.

As I listened to these conversations, I was keenly aware that I had also missed nearly half of our games due to other commitments. Nobody else seemed to notice, and I certainly didn’t volunteer the information. As an experienced mixed-race player, I was considered part of the team, but I could also see the line very clearly, and I wanted to stay on the correct side of it.

It’s this cultural tension that Courtney Szto, assistant professor at the School of Kinesiology and Health Studies at Queen’s University, addresses in her new book Changing on the Fly: Hockey Through the Voices of South Asian Canadians, published by Rutgers University Press.* Changing on the Fly explores Canadian hockey culture, how immigrants use hockey to “belong” and to what degree this tactic can ever be successful. Examining racial discrimination in hockey, Szto argues, uncovers other issues that lay at the heart of Canadian mythology.

The book opens with an exploration of how hockey is tied into particular myths about Canadian identity. Many youth hockey organizations, for example, tout hockey as “Canada’s game,” even as youth participation in soccer begins to outstrip hockey. This is because, Szto writes, the cultural reference points of hockey are intrinsically tied to what it means to be Canadian: the backyard ice rink is a symbol of the harsh climate; the player who has lost teeth but returns to the ice, bloodied and bandaged, is a symbol of the grit that pioneers and voyageurs displayed because they had no other choice.

It isn’t difficult to find these cultural markers in the collective experience of hockey. Nearly 60 years after Foster Hewitt’s retirement, Hockey Night in Canada broadcasts begin with his signature sign-on: “Hello, Canada, and hockey fans in the United States and Newfoundland.” When attending an NHL game, despite the players from around the world, we’re asked to stand for the Canadian national anthem. We’re expected to identify with the values of hockey and, by extension, Canada.

But many of us don’t.

When Hewitt was broadcasting, Canada’s immigration system was designed to exclude racialized individuals, and Indigenous peoples were unable to vote. Meanwhile, the history of the Colored Hockey League of the Maritimes, the first professional league, was ignored by the NHL until last year and continues to be excluded from the Hockey Hall of Fame. Nevertheless, hockey culture continues to uphold its narratives as universal Canadian experiences.

These concepts of what hockey means to Canadianness are also reflected in the art and culture of hockey. Take the song “Roots” by The Reklaws, which was featured as the theme song for this year’s World Junior Championship, aired live on TSN. “Roots” features a heterosexual, Christian male from a two-parent family who lives in a small town and plays for his hometown team while working an outdoor labour job. While the song doesn’t explicitly say he’s white, it’s not a huge leap: the two artists are, and most of the men pictured in the vignette created to accompany the song are too. Taken as one example, this song is simply a song drawn from the writers’ experiences growing up in rural Ontario. However, it’s part of a cultural canon enshrined in both mainstream and alternative media: Roch Carrier’s The Hockey Sweater, Roy MacGregor’s Screech Owls series and Barstool Sports’ Spittin’ Chiclets podcast, to name a few. Taken together, this canon privileges whiteness, masculinity and heterosexuality.

The symbolic whiteness of hockey has a real impact for players. Although hockey’s participants and leaders have been quick to condemn open acts of racism, they keep happening. In 2020, the Greater Toronto Hockey League, the largest youth hockey league in Canada, released statistics that show discriminatory language continues to be a problem. While many instances are addressed with penalties and suspensions, racialized players say the issue is extremely common, and it is clear that minor hockey associations are ill-equipped to handle it.

As hockey contends with its own racism problems, it also fails to lend its voice to broader struggles for racial justice. NBA players were so vocal in the wake of George Floyd’s death in May that they forced the league to take an unequivocal, albeit belated stance condemning racism and police brutality against Black Americans. Meanwhile, the NHL dragged its heels before addressing the issue in a sanitized way that completely missed the point.

Szto’s Changing on the Fly also delves into issues connected to, and independent from, race. For example, as new research shows, Canada continues to lag in addressing homophobia in sport. When I played hockey, use of homophobic slurs was so common in dressing rooms that the language became normalized. More recently, in my work as a referee or a coach, I’ve often needed to have conversations with young teenagers to teach them about what constitutes a homophobic slur.

Another hot-button issue addressed in Changing on the Fly is that playing kids hockey can be impossible for low-income families. While parents can register their six-year-olds for recreational hockey for as little as $300 a year, those annual rates quickly climb to between $500 and $1,200. Equipment, even secondhand, is expensive and has to be replaced regularly. If a child is talented and wants to play competitively, parents shell out at least another $1,000 to play with their local association. If they want to jump to the “elite” programs that feed players into junior, collegiate and professional environments, the cost skyrockets to between $10,000 and $30,000 a year.

It’s not just those costs. Parents are expected to be able to get their children to 5 a.m. practices, while also possibly getting older children to 9:30 p.m. games. On Saturdays and Sundays, games can occur at any time and, at higher levels, possibly hours from home. All these are difficult for parents who don’t work a typical 9 to 5 schedule, and near impossible for families who do not own a car.

Much like me, many of Szto’s interviewees have continued their involvement in hockey. While all of them detail negative experiences during their hockey careers, they often dismiss the possibility that racism, sexism or homophobia were the causes of these experiences. Even years later, most are reluctant to name the problem. It’s a difficult balance for marginalized players: if the problem is widespread racism or sexism and not just the one coach or a handful of players, what does that say about their own place in the game?

Changing on the Fly interrogates the culture of hockey honestly, and from a place of love, offering a critique that is meant to change the nature of the sport so that everyone — not just white, straight Canadian men and boys — can truly have a place in it.

As Szto points out, this change will not come from simply seeing more Black, Indigenous, Asian, queer or women players on the ice or in leadership roles. There is no significant difference between hockey organizations that have a modicum of diversity in their leadership versus those that don’t. That’s because the diversity is token in nature — it may be visually identifiable, but it’s not cultural or structural. The people filling those roles have been selected because they are competent, but also because they either conform to the dominant cultural values of the sport or they are unwilling to make waves. (Because if they did, the culture could be weaponized against them.)

There have been small, if exciting, wins — Harnarayan Singh’s Punjabi broadcast of Hockey Night in Canada, for example, to which Szto devotes a chapter of her book. But as she details, the broadcast was made possible by the herculean efforts of the Punjabi-speaking hosts, rather than any true vision on the part of executives, and it stands as a lonely beacon of multicultural content in the hockey universe.

If the culture of hockey is going to shift to be a more inclusive, there must first be an admission that change would be positive for the sport. Players, coaches, fans and decision-makers, particularly those who are traditionally valued in hockey culture, must be pulling in the same direction, without fragility or defensiveness. 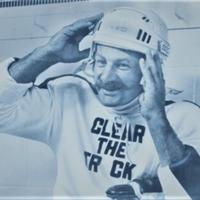 Once There Were Blue Collar NHL Players. So Long, Eddie Shack

This requires a willingness to abandon some of the symbols that have marked hockey for decades but don’t reflect the true diversity of the game: hockey players should not be praised for jumping back into the game instead of undergoing medical evaluation and treatment; there must be a chance to balance elite training and meaningful education, rather than empty platitudes about success both on and off the ice; elite playing experience should not be a requirement for jobs in the upper echelons of coaching, management and broadcasting; and we must disavow the notion that sports and politics are two separate entities, recognizing that social justice and human rights are not merely political issues.

Most crucially, governing bodies, leagues and broadcasters must make a conscious decision to facilitate and showcase the participation of racialized individuals, women, queer-identifying individuals and para-hockey players, who should be just as much a part of hockey culture as Sidney Crosby or Wayne Gretzky.

If Canada wants hockey to be universal, it’s essential to make sure that it really is for everyone.