Kenneth Grahame, the author of The Wind and the Willows, may have put it best in words, but painter E.J. Hughes did it best in paint. Sometimes you just need to mess about with boats.

The E.J. Hughes Book of Boats, forthcoming from TouchWood Editions, collects some of the British Columbian painter’s most iconic images of schooners, ferries, tugboats, barges, freighters, paddle wheelers and plain old rowboats into a lovely compendium.

Whether you’re a grizzled old salt or a weekend sailor, the majesty, beauty and freedom built into the notion of sailing away from all your problems felt especially appealing on the West Coast this week. In the midst of smoky skies and the clammy gloom they created, Hughes’ images are a kind of tonic.

Hughes wasn’t much of a sailor himself. He couldn’t swim and got seasick on long voyages. Nevertheless, his paintings of different vessels attracted collectors and ardent enthusiasts from early on. As he wrote in a letter to his sister in 1966, “Perhaps I am becoming noted for my boats.”

Robert Amos, Hughes’ official biographer and the author of two previous books on the artist, brings a lightness of touch to the selection, pairing fully-fledged paintings next to preparatory sketches and watercolour studies.

The effect is both humble and fascinating, offering a look into the creative decision-making of the artist. Which details are foregrounded, which are left out? Small touches like the pattern of a work shirt or indications of colour and placement are penciled in Hughes’ crabbed script for later embellishment.

The details in Hughes’ painting of Taylor Bay on Gabriola Island is a case in point. From the burnt umber grass to the red peeling bark of arbutus trees, the colours are burnished and dark, but light is present throughout. In the dappled waves and reflections on the water, as well as the tidy bright houses that line the shore, the artist uses white almost as a punctuation point.

The effect is to punch out certain details so that they embed in the eye. This is seen in the fishing boat in the centre of the painting, lit like a beacon. A man in a Cowichan sweater is busily at work, his back turned. In Amos’s book, the image is accompanied by an excerpt from writer Adrian Chamberlain in the Victoria Times Colonist, who describes the painting “like a powerful dream.”

There is something of a heightened quality in Hughes’ work. Drama is the simplest way of putting it, but it’s drama of a gentle and homely nature.

This is apparent even in the most mundane images, such as Village Wharf, which depicts a simple inboard motorboat tied up to a dock. The boat bears a resemblance to a craft that Hughes and his wife Fern owned when they lived on Shawnigan Lake.

At first glance the painting is a simple image, but there are curious depths on display. In the play of light and water, reflection versus solidity, the smooth, sensual curves of the bow, it is buoyant, jaunty even. But like many of Hughes’ images, a certain kind of sadness attends. A world and people passed on.

Hughes also had a particular attachment to the Princess ships of the Canadian Pacific Steamship Co., and many of the most magnificent paintings in the book are drawn from this line of vessels.

The SS Princess Victoria, built in 1903 at Newcastle upon Tyne, suffered an untimely end. She did the run between Vancouver, Victoria and Seattle, but sank in 1953 after hitting a rock in Welcome Pass. The SS Princess Mary had a kinder, gentler fate and is fondly remembered by many after being converted into a restaurant in the Victoria Harbour.

Even in Hughes’ time, the Princess Victoria belonged to an earlier age. His painting of her takes a certain creative licence, drawn from postcards and images of the vessel at the height of her powers. Hughes captures the proud cut of the ship’s bow slicing through the loden green waters of Active Pass with piercing precision. The air of romance is palpable.

As a kid, I remember singing the radio jingle for the SS Princess Marguerite as loudly as possible on the school playground. Ferries were the height of excitement then, and even now a piece of this feeling lingers. 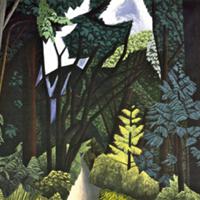 Stay at Home and Enjoy BC’s Beauty, Thanks to Painter E.J. Hughes

In addition to the boats themselves, the book is filled with lushly-painted B.C. land and seascapes, familiar and yet somehow more lovely than reality, if that’s possible. Perhaps it is the artist’s way of working that imbues these images with such emotional heft.

Hughes often painted things long after he’d seen and sketched them. His work is a landscape of memory, recollected and recreated away from the actual thing itself. A drawing of beached fishing boats at Roberts Bay near Sidney, which Hughes drew in 1948, didn’t become a painting until almost 60 years later.

The image of boats pulled up on the sand and an old work shirt flung over the side carries with it a radiant beauty, touched with melancholy. The people who shepherded and cared for these vessels are long gone, and only the memory of them lingers, caught in colour, form and line.

Each kind of boat in Hughes’ paintings possesses a distinctive personality, whether it’s a pugnacious little tug or a regal steamship. Even the most ordinary car ferry gets a star treatment. Looking at them, it’s hard to resist the pull of simply hopping aboard and making for the horizon.