When this book is published at the end of March, it should have thousands of pre-orders from every municipality and first-responders’ union in Canada. Thousands more should be ordered for MPs, MLAs, and their staffers, with enough extra to supply voters concerned about drugs as well.

That’s because every municipality faces the disastrous public health challenge of opioids, and no councillor or mayor or city manager should be without this book. Nor should their local paramedics, firefighters, police and healthcare workers; Benjamin Perrin warns them of a clear and present danger to their occupational health and safety.

That danger is not some new bug like coronavirus, but the deliberately framed and legislated laws and regulations of our provincial and federal governments.

While Canadians and Americans were occupied with other matters, opioids quietly infiltrated their lives, whether prescribed for pain from workplace injuries or used to ease the pain of psychological trauma. While many of us continued to think that using drugs was a matter of choice for people wanting to get high, users were taking them out of necessity, simply to feel normal — to stop pain or the agony of withdrawal.

Perrin approaches his subject from an unusual perspective: as a UBC law professor who once advised the Stephen Harper government on drug policy. Perrin’s attitude was then as judgmental as the government’s.

But as he researched the subject, evidence began to override ideology. And the more evidence he uncovered, Perrin realized this really was a public health disaster being studiously ignored by the federal and provincial governments — a disaster not only ignored but aggravated by their policies.

An oral history of a health crisis

Perrin’s writing is far from academic or legalistic. He interviewed scores of people, from Vancouver Fire Chief Darrell Reid and veteran narcotics cops to people running safe injection sites, and like a seasoned journalist he gives us their own words. The book reads like an oral history.

Like a prosecutor, Perrin inspects the evidence for the conservative stand on drugs, point by point, and finds that it is not evidence at all — just a futile, moralistic attitude that has cost us billions of dollars and countless lives.

Can we stop fentanyl at its source? Not a hope — and if we could, labs would spring up here in B.C.

Are naloxone and suboxone the solution? They help keep a lot of users alive, buying them time to seek a remedy for their cravings. But a user who decides to seek help has just two hours before withdrawal pulls them back.

Are we supporting addiction by giving users safe injection sites and even safe drugs? No — just ensuring they don’t die of an overdose or pick up hepatitis or HIV/AIDS. And with safe drugs in their veins, users are in the two-hour window when they’re open to help.

Perrin explains clearly how fentanyl has revolutionized the drug trade: It’s very cheap, and you don’t have to deal with unpleasant people in the cartels or smuggle it across borders. Just go on the dark web, order some from any of many Chinese producers, and UPS will deliver it to your door. You can mix it with caffeine or other drugs, but your doses may be weak or fatal.

What’s more, the producers can crank out fentanyl analogues that are chemically different but deliver the same punch. Unless their formulas are specifically named in the law, they’re legal.

Shutting down the local market, the police tell Perrin, is impossible. Bust a street dealer, and someone replaces him at once. Busting a major figure in the trade requires so much money and surveillance time that it would drain the budget and take years.

Crank up the punishment? A great idea that hasn’t worked in decades of “deterrent” escalation. The war on drugs, Perrin demonstrates, has utterly failed. There are more and cheaper drugs on the market now than ever before. Users are willing to take a chance even on drugs tested to contain fentanyl; the odds of being caught while receiving fentanyl from overseas are microscopic, like the odds of putting a senior drug dealer in prison. 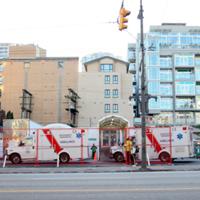 First Responders Reflect on Opioid Crisis: ‘You See Your Efforts Going in Vain’

Even the cops who’ve built their pointless careers in the war on drugs admit they’ve lost. The war continues only because politicians like Ontario Premier Doug Ford and Alberta Premier Jason Kenney find more votes in killing drug users than in rescuing them. It’s a rich irony: politicians get power from voters who don’t begin to understand the problem, while everyone ignores the doctors, cops, and first responders assigned to deal with it. (And who often suffer psychological harm themselves from trying to save users.)

“Canada’s century-long experiment with drug prohibition and tough-on-crime drug policies has been a miserable failure,” Perrin concludes. It’s as if we’d diagnosed diabetes as a personal lifestyle choice, and insulin as a way to get agreeably crazy — and then criminalized diabetics.

In 100 days of research, Perrin’s views on drugs had been transformed: “In retrospect, my previous views were based on ignorance and ideology — a dangerous combination.” He doesn’t offer a dramatic solution to all our drug problems, only a list of coping methods: learn how to save a life, get a naloxone kit, support friends and family who use drugs, get politicians on side. As a religious man, he appeals to believers and unbelievers alike:

“The same Jesus who I follow laid his hands on lepers when no one else would even come near them. Are more professing Christians willing to similarly love and care for people who use drugs, rather than judge and condemn them?”