Zero hours in on a 95-hour train trip from Vancouver to Toronto. No bed. No WiFi. Just a bunch of sandwiches in ziplocked bags and the firm conviction that this is the right thing to do.

When I decided to leave the West Coast to study in Montreal, it made perfect sense to assume I’d be taking a giant metal bird across the country about four times a year. I’ve long criticized our carbon-intensive society, but still felt I needed to join in a little to accomplish my goals.

Until Greta Thunberg got on a boat and sailed across the Atlantic Ocean.

If Greta had decided to take the plane, I would’ve defended her tooth and nail. “It’s the only option! She’s making up for it in other ways!” And that would have been my defence, too.

But Greta didn’t give me the chance to make excuses. She refused to participate in the culture of complicity she is fighting.

So where did that leave me, a 21-year-old acting student in Montreal, when my mother called asking when classes end so she could book me a flight home to Vancouver for Christmas?

The dome car — officially the Skyline car — is a rolling time capsule. The cars were built in the 1950s, and the last design update is from the’ 80s. Rounded lights, faded artwork — and views. It’s the perfect setting for a spy movie set in the Swiss Alps. But I am not in the Alps. I’m sitting on a caper-coloured couch, chasing a cellular connection, not foreign spies.

I dodged my mother’s question for a few days until I worked up the courage to call my folks to tell them that instead of flying, I’d be taking the train ride from Toronto to Vancouver. (Next to climate change, perhaps my biggest fear is being rejected. Paradoxically, acting on my environmental convictions can mean taking an unpopular road. Maybe 21 years should be enough time to get past it, but I still crave my parents’ approval and fear their scrutiny.)

To my relief, they weren’t opposed to the idea. My parents even generously paid for my ticket to Vancouver — $1,800 to book Sleeper Plus Class, which includes meals and a bed. The sleeping options range from tiny bunks along the corridor to queen-sized suites. I was randomly upgraded from a cabin for one, where the toilet lid doubles as a cushioned foot stool and fold-down-bed support, to a spacious cabin for two.

A week later, without telling anyone, I bought myself an Economy Class ticket for the way back. If I was going to do this, I wanted a round trip, and I wanted the only train experience a young Canadian student could conceivably afford: Economy Escape Fare. Four days on a train with no bed and no shower, for the low, low price of $420.

Frozen tree branches nest around homesteads. The horizon meets the land at a point farther than the eye can see. The sun sparkles on the landscape, and all of the earth seems suspended in a wintry lullaby. Beat that, WestJet.

When I share my travel plans with my friends, they think I’m bats.

“I’m pretty sure five days on a train produces more emissions than four hours on a plane.”

(No, it doesn’t. Calculations vary, but air travel produces about 20 times more emissions per kilometre.)

“I wouldn’t be willing to spend that kind of money.”

That last point seemed to hurl everyone under the age of 30 into a brief rendezvous with their maker.

Snow is softly falling. Streetlights punctate the world’s most silent sentence. Winnipeg is one of our longest stops, so I can go explore The Forks. Hopefully the friend I’ve made is around and wants to wander with me. Back in university, when I want to see if someone’s free I knock on their door. In economy, we just go to their seat and see if they’re awake. Same difference.

My family was upset that I had to leave shortly after Christmas to allow for the four-day journey. They asked me to reconsider.

But I couldn’t. Partly because there were no refunds, and mostly because the draw to align myself with my beliefs was stronger than the tug of doubt.

Fifty hours in. I’m folded into an L-shape, lying on the seat with my legs pressed against the window. The train is where good sleeping habits come to die. Fellow passengers tap at tablets and watch TV shows through the night, not batting an eye when a pack of children do the same. The bad news is it’s hard to fall asleep. The good news is that soon your body doesn’t have a time preference. It’s as easy to drift off to the morning murmur of economy class as it is to an aggressive rap beat leaking through some earbuds a few rows down at 1 a.m.

On the deluxe Sleeper Class train to Vancouver, I slept through the night and ate three meals a day. I worked on my computer, got restless, took advantage of my cabin’s space to choreograph terrible dance routines, and ventured out for food.

Meals become the highlight of the day. We waited in the games car in rapt anticipation until the staff called us in and sat us. My fellow sleeping car passengers were mostly white retirees or sightseers, taking the train to visit family or just for something to do. Over several three-course dinners I got to know a sound designer from Montréal, a CGI effects artist from England and a TV producer from Toronto.

At stops along the way — usually, there were a couple each day — I watched the economy passengers boarding. There were international students, groups of men with work boots who stood and smoked, and an Inuit family with four children.

And then there was Prestige Class, the even posher option. The two “prestige cars” smelled like money. Each cabin has a TV with films, a bathroom, a shower and a queen-sized bed. I know because I asked a staff member to show me one. They were using it to store the breakfast muffins.

On my return trip on Via’s Canadian, I noticed some stark differences between Sleeper Class and economy. Starting with the menacing “Traveling Better Together” pamphlet stuffed in the mesh pockets in front of the economy seats. It lists all the reasons you can get kicked off the train — like “distribution of… narcotics,” “carrying a weapon” and “endangering… the safe operation of the train.” I braced myself for an exciting ride.

As it turns out, everyone on board met or exceeded the “Canadian” level of politeness. The most entertaining things were the people I met and the chance to stop, once or twice a day, at remote communities along the railway. For the 10 to 20 minutes we’d stay, I’d take in the lack. The lack of stores, the lack of options, the lack of energy. Somehow it was all very fulfilling.

“You look like you’re out of your climate,” says the man smoking by the train. He watches me stumble up a massive mound of snow in my sweatpants and snow boots.“You can I tell? I’m from Vancouver. We don’t get snow there.”

Here, the air is thick and dark. The snow is clean and deep. The streets are completely empty. I absolutely love it. I look up to the unlit window of someone’s attic and can imagine an alien invasion here. Something paranormal. I trudge through deep unplowed paths for the sake of it. I spot a huge icicle, break it off, wield it like a sword, a unicorn horn, and then harpoon it at a salt bin. On the way back to the train, I wade through as much powder is possible. My socks and sweatpants are soaked. But I really don’t care. The darkness is so deep, and there’s all this snow, snow, snow.

Sometimes it seems that all humankind is a school of 7.5 billion fish swimming in the same direction. Right now, we’re heading off a waterfall. Still, it’s infinitely easier to go with the flow and feel protected by the solidarity of the school.

Attitudes and behaviours that lead us closer to the edge flow naturally: Buying new things, accepting the status quo, eating meat, driving a car, taking the plane, using plastic: these things are convenient.

But if the path toward destruction is convenient, to avoid it, the individual must inconvenience themselves.

So did Greta, by following her convictions into a sailboat on the Pacific Ocean. So am I, following my convictions across much of a country. 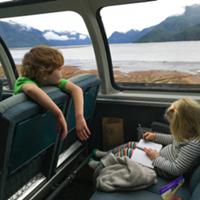 All A’bored: Riding the Sweet, But So Slow, Skeena Train

Five minutes from the station, everyone in economy is standing up. Our eyes are wide and pointed in the direction the train is headed. We wear expressions of rapt anticipation and joy that rival the perpetual cheerfulness and hope of a Golden Lab.

It’s a joyous day. I’m surrounded by the people who shared this ride. The couple about to have their first great grandchild, the teenager going to Toronto to find work so he can send money home to his family, and the bearded man who, late at night, showed the teenager and me pictures of all the squirrels he’s trained.

By the time The Canadian has come to a halt we have finished saying our goodbyes and wishing each other good luck.

As I lug my bags onto the concrete platform, unclick my suitcase handle and roll away, the struggle of choosing to take the train is no longer a struggle. It’s just a part of me, locked away below the neck pillow over my shoulders, beneath the winter jacket zipped over my chest.

Everything around and within feels very all right.