“These were not powerful or prominent women, but they changed everything.” — Margo Goodhand

Countless women endured violence in their own homes, but it was not acknowledged as an issue in the public realm. It was a shameful secret, quietly accepted as a part of life for women.

When a woman was abused, there was nowhere to go. A woman’s place was in the home, even if home could kill her.

Against this grim backdrop, different groups of women across the country worked to open Canada’s first women’s shelters.

In the summer of 1972, 24-year-old Lynn Zimmer was volunteering at a Toronto feminist organizing space called Women’s Place when women who’d been abused began calling to ask for help.

Zimmer realized there was nowhere for them to go. So she posted a note on the wall of Women’s Place, inviting anyone who was interested in creating a women’s shelter to come to a meeting.

They shared little in common — Stone was a 34-year-old mother working in addictions counselling, Lawson was a 23-year-old student — but they were united by a sense of empathy and outrage at what women were experiencing.

“The energy was very high,” Zimmer remembers. “We were all excited about doing something that would make a difference for women.”

They sat around a table and shared their visions. The shelter needed to feel like a home. It would have healthy food options, and everyone would chip in for chores. It would be a haven for women escaping violence and a stepping-stone for their next chapter. 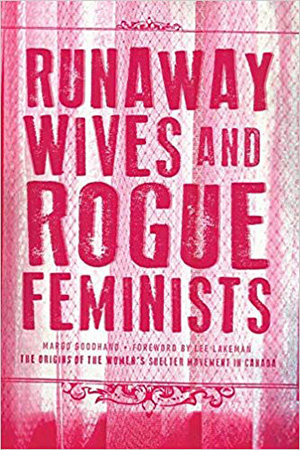 So Zimmer and her band of feminists decided to start something entirely new. They named it Interval House, for the space between a woman’s past and a future without violence.

Across the country, other women were taking on the same challenge. Women’s shelters began popping up like sunflowers.

The next shelter to open was Ishtar Transition House, located in Aldergrove, a community east of Vancouver in B.C.’s Bible Belt, created by Janet Currie and other founders.

In June 1973, the Calgary Women’s Emergency Shelter opened. Founding member Joyce Smith made a critical decision that helped to protect women and children in crisis: the location of the shelter was confidential.

The Women Alone Society in Saskatoon followed, with a different dynamic. Its founders weren’t just young women inspired by the feminist movement; they were survivors of domestic violence themselves, says Margo Goodhand, whose 2017 book Runaway Wives and Rogue Feminists chronicled the history of women’s shelters in Canada.

The Edmonton Journal told the story of Lorraine Kuzma, a young woman in Saskatoon with two children and a violent husband. One evening, after Kuzma’s husband twisted her big toe until it broke, the police told her to flee her home. But there was nowhere for her to go, until she helped create the Prairie city’s first shelter.

Vancouver’s Transition House opened months later, in December 1973. The shelter had taken longer to launch than the others, writes Goodhand in her book, but it was larger and had received greater government support.

That’s how it all began. Groups of women across the country who had no money, no support, no blueprint. Just an unwavering commitment to supporting women in need.

It’s an incredible story. One that Goodhand says she felt compelled to chronicle.

In 168 pages, Goodhand provides a definitive account of the women’s shelter movement in Canada, and how five different groups of women became feminist trailblazers.

Goodhand recounts how these women, spread across the country in a pre-Internet era, all began organizing in the same year without knowing others were doing the same. Their approaches and partnerships differed, but each group shared a vision of offering sanctuary and hope for battered women.

“There was something in the air,” Goodhand remembers one of the founders telling her.

These women marked a defining moment in Canadian history, bringing a historically ‘private issue’ into the public eye and triggering enormous changes in our homes, schools, courts, government and law enforcement.

It wasn’t easy opening those doors. While struggling to secure funding, these women scrapped for furniture donations, made do without paycheques, dealt with negative press, cooked and cleaned, fought against society’s misogynistic assumptions and accompanied women to court, all the while facing down violent husbands.

“We had no direct experience doing anything like this,” says Zimmer. “We were not social workers or counsellors.”

Convincing society that it was the community’s responsibility to help abused women was an uphill battle. In fact, the whole idea was controversial. Currie has discussed rumours flying about the shelters, from warnings of police surveillance to claims they offered secret abortions.

When they approached organizations for funding, people were resistant. The women were seen as “creating an issue where there wasn’t really an issue,” says Lawson, one of the Toronto founders.

Forget the need for credible spreadsheets and business plans to persuade funders. The first step was to convince them shelters were even needed.

“Potential funders were often skeptical that the problem of wife assault and violence against women even existed,” says Lawson.

In July 1973, the Toronto Star ran a story about Interval House with the headline “The rising wave of runaway wives,” suggesting the shelter was creating a “brotherhood of deserted husbands.”

Despite the barriers and derision, Lawson remembers an unwavering commitment from the founders.

“We were fuelled by the conviction that lack of awareness and resources for abused women was an appalling gap in our social fabric that put women’s lives at risk.”

Luckily, thanks to then-prime minister Pierre Trudeau, there were grants available for grassroots initiatives. The Local Initiatives Program, a federal job creation program that ran during the early 1970s, provided funding for the Toronto project that allowed the women to pay themselves $100 a week — equivalent to about $565 today — during the shelters’ early years. It was modest, but it was enough.

Other eclectic supporters helped Interval House get off the ground. The group gave a presentation to the mayor and his very supportive wife, who connected them with a landlord renting a large house. The United Way chipped in $1,200 for the first and last months’ rent.

From public criticism to apathetic police forces to enraged husbands, the founders of the shelter movement faced obstacles at every turn. Courts and immigration officials were often unhelpful. Religious leaders urged women to return to violent spouses.

Stone says that was a huge challenge as they worked to open the Toronto shelter.

“The hardest part was trying to overcome the negativity regarding helping women to stand up for themselves and the public backlash,” she recalls.

Zimmer says the women’s experiences also took a toll, recalling the difficulty in “hearing the stories of abuse, seeing the bruises and hearing stories of incredible brutality, disrespect and emotional cruelty.”

The struggles were real, but they were overshadowed by the magic. Zimmer treasures the “dramatic positive changes that were evident after a woman and her children had been at Interval House for a few days.”

Stone remembers the satisfaction in helping the women who used the shelter to overcome their fears and rebuild their self-esteem and self-worth. And in working with other women committed to the cause.

“I loved working side by side with dedicated women to make change,” says Stone, who continued to serve women at the YWCA until her retirement in 2015.

Goodhand says she was compelled to write the book because she wanted to honour the women while they were still alive, and she wanted to document this history before it was lost.

The origins of Canada’s shelter movement hadn’t been recorded and would likely never be recorded if somebody didn’t take up the challenge.

“It was a matter of women’s history,” says Goodhand. “It was also a matter of social service history — these women were and still are too busy just trying to get the job done to record their efforts for ‘posterity.’”

Goodhand says all the women she interviewed were courageous, articulate, resilient and compassionate. But the most prevalent characteristic was their practicality — “they all saw a need and they all rolled up their sleeves.”

But the issue remains the same: shelters keep getting built and keep getting filled. “I am really sorry to say that not much has changed,” says Stone.

Violence against women is a persistent problem in Canada. According to the Canadian Femicide Observatory for Justice and Accountability, a woman or girl is killed every other day, and a woman is killed by her male partner once a week. Zimmer acknowledges that the safety net for battered women has grown since 1973, Canadians are now aware of the phenomenon of violence against women and domestic violence is now a crime.

“Yet the violence continues and expands,” she says. “Shelters are full.”

Lawson, who went on to hold senior roles with the Elizabeth Fry Society and the Ontario NDP, says the problem remains.

“That 8,000 women and children stay in shelters every night in Canada proves how much has yet to be done to eradicate the root causes and systemic conditions of violence against women,” she says.

We live in a world in which women don’t often make history. Or more accurately, don’t make it into the history books. But Canadian women have a rich and complex story to be told, and it’s one we should all know.

This Women’s History Month, as we continue our battle against domestic violence, let’s remember and celebrate the fierce feminists who went to bat for battered women.