The other day in a West Vancouver public washroom, I thought about smashing a woman’s face in.

It was only for a moment, but the image of blood and bone and broken porcelain flickered across my vision for a moment, like heat lightning, leaving behind a destabilizing queasiness, like a sudden, instant hangover.

The fact that I’d just come from seeing Quentin Tarantino’s new film Once Upon a Time... in Hollywood might have something to do with this incident.

Violent movies and video games are an easy out for pundits and presidents looking to assign blame when real violence strikes. In the wake of two mass shootings within a 24-hour period in the U.S., the notion that somehow mental illness and media were the root causes, and not access to approximately a gazillion guns, was immediately shot down by rational folk.

As a number of analysts pointed out, video games and movies are widely available in every industrialized nation around the globe, but mass shootings are a distinctly American phenomenon.

Still, something uneasy lingered after that brief homicidal bathroom moment.

After the impulse to beat up an irritating old lady in a bathroom passed, I thought about the anger that lurks like a coiled snake in much of contemporary culture. Tarantino may have made an art form of bloody violence, but he’s certainly not alone in this indulgence.

For people who’ve not been following the ongoing debates about the film, in quick summary, Once Upon a Time... is a reimagining of the events that took place on Aug. 8 and 9, 1969, at 10500 Cielo Drive, when actress Sharon Tate, Abigail Folger, Wojciech Frykowski, Steven Parent and Jay Sebring were brutally murdered by members of the Manson family.

The details of the crime and the subsequent trial have been exhaustively exhumed, carved deep into the American psyche. To say that Tarantino’s film takes liberties with historical fact is putting it mildly. For those who have not yet seen the movie, you may wish to look away now. We’ll be (mildly) spoiling.

But before we get to the events that altered American consciousness forever, the film lays down, in successive coatings, the time, place and culture of Hollywood in the swinging ‘60s. The film goes to town in recreating the era, from the neon sea of the Sunset Strip to the radio jingles, pop songs, and even the correct brand of crackers for the period.

It’s easy to get lost in the thick and loamy detail — the bourbon-heavy, glamour-soaked atmosphere. The film is a nostalgia piece, steeped in both the sweet and bitter flavours of the time, and this level of artefact is entertaining enough. But the rococo richness serves another purpose.

The film plays easily with facts and fiction, building drama around a pair of male archetypes, an aging movie star named Rick Dalton (Leonardo DiCaprio) and his stuntman/support network Cliff Booth (Brad Pitt). Both men are fading into irrelevance as the times shift around them. Dalton, drinking too much and on the downward slope of his career, has been reduced to playing heavies in episodic television. Cliff, no longer required to do feats of derring-do, has become little more than a gofer.

In the crepuscular L.A. air, Rick and Cliff mosey about, one man desperate to keep his career afloat and the other content to drive around town, ogling women and getting into fights. The fact that Cliff murdered his wife with a spear gun and got away with it is a little grace note added to the action. Coincidentally enough, Rick’s next-door neighbours are Sharon Tate (Margot Robbie) and her husband Roman Polanski.

In Tarantino’s Hollywood, real people mix fluidly with the made-up variety. Steve McQueen, Bruce Lee, Mama Cass and Polanski all pop in, but they’re mostly there to add local colour, like monkeys and tigers peeking through the foliage of a Rousseau jungle painting. Initially it’s all mini-skirts and go-go boots, but there is a worm at the heart of the rose. Scary hippies with dirty feet and vacant stares are clustered like bluebottle flies at the edges of the action.

The film takes its sweet time getting to the core of the story. There’s some blarney about method acting, the business of the Hollywood studio system, and a few scenes dedicated to Tate’s short-lived film career, but all of this stuff feels gossamer. It blows away as the final reel kicks in and the real action ramps up. 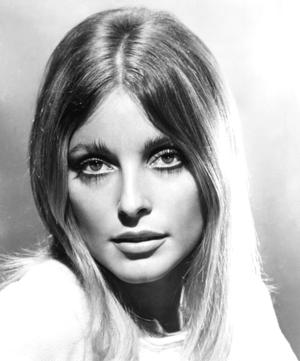 The real-life actress Sharon Tate, in a promotional photo for Valley of the Dolls.

By the time Cliff pays a visit to the Spahn Ranch, where members of the Manson family are hiding out, a creeping sense of menace has begun to build. On the infamous evening of Aug. 8, when the members of Manson’s family pay a visit to Cielo Drive, it finally explodes.

What follows is a send-up, but a spectacularly violent one, with a particularly gruesome scene of a young woman getting her face smashed in with an old-fashioned telephone.

The decision to forego reality has attracted a critical tug-o-war over the film, with some folk maintaining that the film functions as a form of redemption, resurrection even, and others stating that the time has come to retire ultra-violence as a form of entertainment.

Tarantino has long been king of the nerd boys, building a film empire on explosive aggression. But the nerd boys and their fantasies of death and destruction have come home to roost in a whole new fashion. In this, the film comes at a peculiar moment, when the mixture of fake and real has resulted in young men with guns and tough-guy fantasies killing innocent men, women and small babies. (As Mary McNamara writes in the LA Times, the film may be Tarantino’s version of Make America Great Again.)

It may not be fair to level instances of mass killings at the feet of Tarantino, but his brand of insanely violent re-imaginings, whether it’s killing Hitler and the gang in Inglorious Basterds or blowing up evil whitey slave owners in Django Unchained, has muddied the water between the “be and the seem,” to paraphrase Wallace Stevens’s poem. As McNamara states in her acidic assessment of the film, “Because that’s exactly what we need at this moment in time: a little fake history.”

The mixture of fake and real also comes to capering life in Once Upon a Time... in the words of a Manson family member who says: “We grew up watching TV. Every show on TV was about murder... My idea is we kill the people who taught us to kill. This is Hollywood. They live in pig-shit fucking luxury. I say fuck ’em.”

This stuff isn’t new. Other writers and filmmakers have dived deep into Hollywood’s habit of mirroring back its own rotten history, along with heaping doses of fictional Americana. The various murders, rapes, suicides that made up the writhing darkness of celebrity culture formed the meat of Kenneth Anger’s Hollywood Babylon. Anger may have embellished the facts in his infamous book to an embarrassing degree, but the real stories are horrible enough, whether it’s the details of Jayne Mansfield’s decapitation or various celebrities being eaten by their dogs.

The Day of the Locust mined the same turf. Writer James Ellroy explored the conjoined events of his mother’s rape and murder and the unsolved killing of the Black Dahlia in his L.A. Quartet of books. Joan Didion captured the transition between innocence and horror with dry eloquence in The White Album.

It’s little wonder that this stuff would be catnip to a filmmaker like Tarantino. The director’s magpie habit of wantonly taking from other sources is put to use in Once Upon a Time..., but in some fashion this constant quotation provides a good smokescreen for the other things happening in the film, from casual racism and misogyny, to more problematic things like killing women for fun.

Whether you think the film is a condemnation of extreme violence, a celebration of it, or both in simultaneity probably depends on your age, gender and ethnicity. To be fair, there is something incredibly sad about the entire premise. Once Upon a Time... functions as a memento mori, not just to Tate, but to movies themselves. But that doesn’t erase or excuse its more problematic aspects.

Let me return for a moment to my own violent fantasy in the West Vancouver washroom. It was only a fleeting impulse, but I felt sick afterwards. Anyone who lives in a large city has those experiences: people shove their way onto the train as other people try to get off, or someone flips you off while driving, and a white bolt of rage surges up like a gas flare.

I think the causal relationship between violent movies and actual violence is not a direct link; rather it’s the water that we swim in. But most folk, when presented with real violence, even the potential of it, recognize how ugly and grotesque it is.

At the end of the film, I found myself thinking about the real Sharon Tate and her unborn baby. In truth, they died in the most horrific fashion possible. All of the magical thinking in the world will not change that. The real world remains: the blunt facts of death don’t change, and, increasingly, fantasy feels like a death wish.