The Internet is a strange place.

Close your eyes and picture it — a teeming jungle of extremity, filled with rank pools of misogyny and transphobia and other scaly predators. In among the slithering vines of unfounded opinion, there are sloughs of violence and anger that, like quicksand, will fill your eyes, nose and mouth and suffocate you with granular horror.

And there are death threats.

When writer-singer-polymath Vivek Shraya began receiving a series of strange email messages, her first reaction wasn’t fear but confusion, even bemusement. (She first wondered of the sender: “Were you complimenting me? I love compliments!”)

The fact that the author included their full name and address made it stranger still.

“It was kind of an audacious move that indicated a weird level of confidence,” Shraya said. The vivid and specific cultural language, including Sanskrit words like “Napumsaka,” meaning eunuch, used in the emails made her almost curious about who was sending them.

But it soon moved from being an odd experience into something genuinely frightening, and eventually formed the basis of Shraya’s new graphic novel, Death Threat.

“It was the nature of the letters,” Shraya said. The fact they weren’t the usual transphobic rants, but stranger, more surreal, was scary enough. References to Shraya being hunted through the forest or locked in a mud hut, as well as the letter’s author insisting he was only trying to be helpful, added another creepy layer.

But the writer also seemed to know a great deal about Shraya’s work, and her family. Some of the messages she received made veiled references to her album Part-Time Woman.

Shraya has never hidden who she is, and this kind of visibility attracts attention. In addition to being nominated for a Polaris Prize, her writing has captured both critical acclaim and popular success. She teaches at the University of Calgary and has forged a career in multiple disciplines — music, writing, performance, film, theatre and visual art — and even made the Globe and Mail’s Best Dressed list.

Any person comfortable and happy in their own skin is a bit of lightning rod for the Internet jungle, but Shraya said the messages she received were different than the usual online trolling she’d experienced, and more unsettling.

When we spoke on the phone, prior to the book's release, my most immediate question was why a graphic novel?

“No other medium best served the story,” Shraya said. “It was a hyper-meta story about hate mail, and the medium is so open.”

The nature of the narrative, as well as the form itself, requires a close and very collaborative relationship between author and illustrator.

Shraya and illustrator Ness Lee had worked together previously on the cover of Part-Time Woman, Shraya and the Queer Songbook Orchestra’s Polaris-nominated album. What was it like working with Lee this time?

“As a pan-disciplinary artist, I’m used to collaborating. But Part-Time Woman was just a single image; this was a bigger project, 70 pages. It was a new experience, and a very different process working with a Type A personality, long distance.”

Shraya had just moved to Calgary when she started the project, and the complexities of working with an illustrator in another part of the country required additional levels of creativity. “We used a Google doc to share artwork,” she explained.

“Working with someone affects your relationship,” she added. “Respect is crucial, love and respect, and responsibility.”

With a subject as fraught as being threatened with bodily harm, even greater sensitivity was needed. As the images and story in Death Threat indicate, the process occasionally proved almost overwhelming.

In one panel, illustrator Lee bluntly states: “This is really fucking hard. I don’t know if we can make it Vivek!!”

Bonding through the process of confronting shared deadlines, the pair, along with colourists Emmett Phan and Hieng Tang, slogged it out, and the book captures not only the nature of their relationships but also the larger project of transforming something angry and ugly into something positive.

In this reclaiming of the narrative, word and image fuse intimately, with Shraya’s words and Lee’s drawings moving together in a synchronous flow.

A shared sense of humour and an appreciation for the ridiculous also helped matters. In Lee’s clear and colourful images, Internet trolls become troll dolls, round-eyed and chubby, with insane thatches of hair.

“Me and Ness was a pure and true collaboration,” Shraya said.

Where did the real story and the more surreal moments begin to blend? The images tell one story, but the reality was a little different.

“It couldn’t work as a straight up document, it required an element of surrealism,” Shraya explained. “The letters were so real and poetically vivid that they were hard not to imagine.”

The surreal qualities of Death Threat link back to Shraya’s previous work, that played easily with family, memory and identity. In Trisha, Shraya recreated photos of her mother, right down to the details of dress and deportment. In Death Threat, Shraya’s mother also puts in a guest appearance, supporting her child with warmth and strength.

What was the resolution? 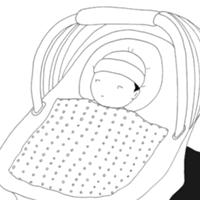 A Mother’s Load of Depression, in Graphic Detail

After she received hundreds of messages, it was Shraya publicly posting about her plans to write a comic book that brought on a cease and desist letter from the author of the threats claiming copyright and intellectual property infringement, she said. The twisted perversity of this merited only one response from Shraya: delete. “They tweeted at me a couple of times after that,” Shraya said.

She’s philosophical about the experience, choosing to take the most useful lessons and apply them directly. “It’s about being able to redirect that energy, and art as a way to cope.”

Death Threat achieves an almost alchemical transmutation, creating something beneficial and beautiful in the midst of dismantling hate and pain. It’s a remarkable thing.

Vivek Shraya will be presenting Death Threat at the York Theatre, 639 Commercial Dr., on Sunday at 8 p.m. as part of the Verses Festival of Words.