Every time I visit the New Media Gallery in New Westminster I feel a strange sensation run through me. A fizzy, ticklish jolt that feels like a one-two punch of champagne bubbles and dervish-swirls.

Goddamn, if it ain’t joy!

The gallery’s most recent exhibition, magnetic_T, is no exception to this general rule.

The show features the work of four different artists — Žilvinas Kempinas, Pe Lang, Tatiana Trouvé and Nelo Akamatsu — each making different use of the powers of magnetism. In addition to invisibly guiding the universe, these forces also play music, push around ball bearings, drag plumb bobs away from their prime directive, and light up your central nervous system like a Christmas tree.

It’s a reminder that the Earth itself is one giant magnet, composed of a molten core of liquid iron that generates energy fields, which direct the paths of migratory animals and swing compass needles due north.

The human brain also produces its own magnetic field that radiates out, mixing and mingling with surrounding forces. Walking through the gallery I felt the hairs on the back of my neck lift in response to the invisible currents moving through the air and across the walls.

“A woman visited the gallery the other day and said she wanted to be buried in Nelo Akamatsu’s Chijikinkutsu,” says curator/director Sarah Joyce.

In addition to curating, Joyce and her partner Gordon Duggan also direct, program and install work in the gallery, and deal with people’s sometimes curious reactions.

The visiting woman’s response to Akamatsu’s extraordinary work is a case in point. At first glance the piece looks straightforward, but what happens when you engage with it is anything but ordinary.

Chijikinkutsu consists of 350 glasses, each filled with water. A metal sewing needle is suspended on the water’s surface. A coil of copper wire attached to each glass creates a temporary magnetic field, causing the needle to hit the side of the glass and produce a tiny ping.

The title is two Japanese words smushed together – Chijiki referring to the magnetic properties of the Earth, and Suikinkutsu referring to a type of Japanese garden installation dating from the Edo period. The traditional practice of Suikinkutsu involves using the sound of water, amplified by earthenware pots, stone basins and hollow bamboo, to create patterns of sound.

In Akamatsu’s interpretation, these rather humble materials, arranged in rising and descending patterns along four walls, give rise to the music of the spheres.

As Joyce explains, the composition created by the artist is precisely orchestrated, although it feels like music that is pulled out of the very air.

Sitting motionless in the room that houses Chijikinkutsu I felt the rest of the world ebb away and something else begin to emerge: a delicate wash of sound that moved over and around the body.

The effect is silken, ethereal, but also piercing, a tinker bell symphony or a cloud of gossamer insects. It’s akin to ASMR, often colloquially referred to as head tickles or brain orgasms, depending on how outré you want to be.

Suddenly I understood the wishes of the woman who wished to remain, permanently, in the work. Who wouldn’t want to let waves of pleasure wash over them for eternity?

Pleasure and play is also a big part of Lithuanian artist Žilvinas Kempinas’s installation, Bearings. Kempinas’s work is made up of hundreds of silver ball bearings sliding around a circle of black oil. The silver globes appear invested with a form of inner life.

Sometimes they behave as though they’re running a relay race, desperately scurrying across an open stretch to reach their waiting comrades. Other times they resemble tadpoles or miniature submarines. As they rotate around, scooped up by communities of their silver brethren and then spat back out, a kind of strange drama begins to unfold.

“People keep seeing letters form,” Joyce explains, and looking again at the patterns that emerge, they do indeed resemble some form of hieroglyphics, silvery graffiti that breaks apart even as you’re staring at it.

The effect is anthropomorphic, balletic, funny, even a bit creepy, but it draws you into the cosmic swirl, a spiralling mandala form that jiggles and wiggles with a manic energy that you recognize in your own cells.

Watching the piece at work reminds me of Jeremy Narby’s book The Cosmic Serpent that examined, with a good dose of ayahuasca, the recurring image of the double helix that winds its way around the world, popping up in religion, science and ritual.

A similar form of magic pops up in Pe Lang’s work moving objects/ no. 502-519. The work, arranged with Swiss precision, becomes a form of dance, as magnets spin and levitate in midair.

It’s an elegant work that also creates its own soundtrack, as the spinning mechanisms give rise to a wash of sound that recalls the patter of rain. The experience invites you to pause and observe closely, with every sense standing at attention as the magnets leap Nijinsky-like into midair and hover there.

The largest work in the show, Tatiana Trouvé’s 240 Points Towards Infinity, is the only one that doesn’t move. Or, rather the movement is implicit, rather than explicit. The tension created by 240 plumb bobs dragged slightly off course by hidden magnetic forces vibrates in the air like a plucked piano wire.

“This work is iconic in France,” Joyce explains, and we both stare for a moment at the different plumb bobs that the artist has collected over the years, wondering what it is that French folk see in them. Some look like Venus of Willendorf, and others resemble butt plugs, but they all strain hard against the wires suspended from the ceiling, removed from their true course.

It gives the work a strange frisson that you almost feel compelled to disrupt. Joyce says an artist who visited the show did exactly that, and the work had to be painstakingly reset. 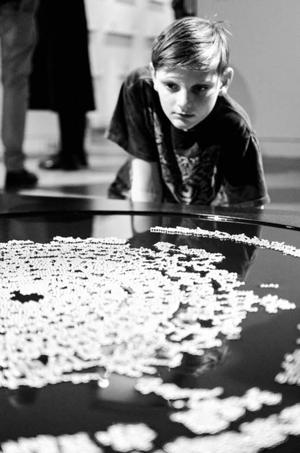 Unlike paintings or sculptures that mostly sit still, an installation like magnetic_T requires upkeep and attention. Joyce explains that every morning the water in Chijikinkutsu must be topped up, and any sunken sewing needles fished out with a pair of bamboo tweezers.

So, too, Bearings must be disrupted every day, in order for the work to regroup. As it reforms, the ball bearings take on new shapes, growing dendrites that gradually take up the familiar mandala resembling the iris of a human eye.

One of the greatest pleasures of visiting the New Media Gallery is seeing crowds of kids, with their parents or teachers, engaging deeply with the work, unencumbered by any notions of what art should be.

Joyce says that children are usually far less intimidated than parents by work that redraws boundaries. The “next generation of creative thinkers” need free and unfettered access to exactly this kind of experience, she says.

In this, the New Media Gallery is doing foundational work, presenting art that doesn’t simply hang on a wall, but moves, interacts, acts up and pushes back. It’s an invitation to play in the most profound sense of the word. Little wonder that kids happily heed the call to get in there and mess about.

This is joyful work, and you feel it as your body reconnects and aligns, a tuning fork for the soul. That’s what art can do: gently move your internal compass, reset it in a new direction, and send you out into world, ready for new things.

magnetic_T runs until May 19 at the New Media Gallery in the Anvil Centre, 777 Columbia St., New Westminster.