Given the grim prospects offered by the Intergovernmental Panel on Climate Change in its recent Special Report, this book might offer a way out. But it won’t be an easy way, and it won’t be the status quo.

Like climate change itself, The Human Planet begins with an obscure squabble among scientists and then turns into a breathtaking new view of humanity’s past and future as a geological and ecological force. Some scientists think we should start calling the present geological epoch the “Anthropocene” — the period in which humans dominate events on this planet. Other scientists think the idea is ridiculous; they want to stick with “Holocene,” meaning “completely recent.” Never mind that they’re talking about the past 12,000 years, which geologically is just another interglacial period among many.

The debate might seem too trivial to care about, but as authors Simon Lewis and Mark A. Maslin demonstrate, the stakes are very high indeed.

They show that scientists since the 18th century have recognized human influence on the face of the earth. What we have learned since then, and especially in the past 50 years, shows our influence has grown only greater; we just don’t want to admit it, because then we’d have to try to clean up the mess we’ve made. 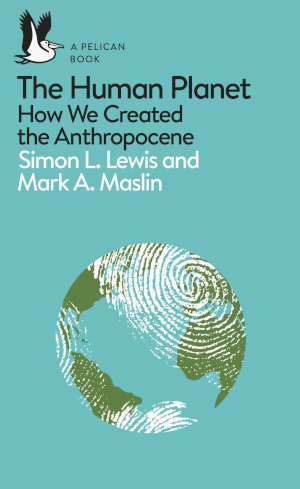 Lewis and Maslin argue that humanity has gone through four major transitions since we left 200,000 years of hunting and gathering. Each transition has been marked by a dramatic access to energy and an equally dramatic increase in information.

We emerged from the apelike human phase thanks to fire and language. Together, those advantages made us apex predators: we could learn to hunt and forage from our elders and then gain more energy by cooking the food we gathered. After 200,000 years some of us still live that way, but it was what Lewis and Maslin call a “progress trap.” After modern humans left Africa, they effectively exterminated most of the larger mammals they encountered: the mammoths, giant sloths, sabre-tooth tigers, and countless others. In effect, they overshot their resources.

So the first transition, they say, was about 10,500 years ago with the beginning of agriculture. Some have said farming was our biggest mistake: it supported more of us, but at the cost of more disease, poor nutrition, grinding labour, and hierarchical societies that turned into warring empires. But we gained more energy from domesticating animals, and more information by the invention of writing.

“Serendipitously,” the authors write, “farming created environmental conditions across our home planet that were unusually stable. This gave time for large-scale civilizations to develop.”

That is, humans launched global warming not in the 1800s but with the first agriculture. By burning off forests to make farmland, we began to pump carbon dioxide into the atmosphere — coincidentally, just as the earth was moving on schedule back into another glacial period. Over the next few thousand years farming spread across Asia, Africa, Europe, and much of the Americas, keeping the planet just a little too warm for a return of the glaciers.

The authors argue that the Europeans accidentally triggered the Little Ice Age by marching into Mexico and South America with guns, germs, and steel — especially germs. Diseases like smallpox and measles travelled on Indigenous trade routes far ahead of the Spanish and Portuguese. In the century after the conquest of Mexico, Lewis and Maslin claim, 50 million Indigenous people died of disease or slavery.

In that truly genocidal century, farming civilizations collapsed from Brazil to North America. The survivors left the cities and temples they’d built and reverted to village-level farming. Forest and jungle took over the old empires before the Iberians rode in to take over the villages.

Lewis and Maslin argue that as forests reoccupied the farmlands that had fed 50 million people, they absorbed enough carbon dioxide to trigger the Little Ice Age. Antarctic ice cores show a drop in global carbon dioxide starting in 1520 that did not begin to rise again until 1610.

Agriculture itself was a progress trap, and civilizations based on it could collapse in a protracted drought or other natural disaster. But the conquest of the Americas was also a second human transition: an escape from agriculture to profit-driven enterprise: “Western Europeans began colonizing large areas of the rest of the world, creating the first globalized economy.”

Lewis and Maslin call this the “Columbian exchange,” when humans, animals, plants, and microbes established themselves in places they had never been before. Energy from new foods, and information from printing, helped drive this new transition. Farming resumed in the Americas to feed and clothe the Europeans, using the labour of African slaves.

That led to the third transition: Europeans no longer needed on the farm became mill workers and coal miners. Scientific progress encouraged coal-fuelled industries and the telegraph spread information worldwide. Then, just a century and a half later, after two world wars, “The fourth, and so far final, transition as driven by a further globe-spanning organizational change.” 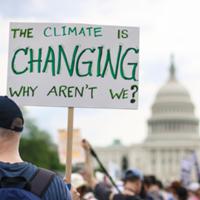 Since 1945 this “Great Acceleration” has permitted the tripling of the human population and the crowding-out of the rest of the planet’s biosphere. Lewis and Maslin tell us: “Populations of fish, amphibians, reptiles, birds and mammals have declined by an average of 58 percent over the last forty years… On land, if you weighed all the large mammals on the planet today, just 3 percent of that mass is living in the wild. The rest is made up of human flesh, some 30 percent of the total, with domesticated animals that feed us contributing the remaining 67 percent.”

Each of the transitions has been a progress trap, and every escape into a new way of life has relied on more energy and more information. The authors note that civilizations can collapse, but not into a previous way of life. Farmers don’t go back to hunting and gathering; they desert their kings, priests, and cities and go back to small-scale farming. When the first global society of the early 1900s collapsed after the First World War, countries reverted to tariffs and relatively small-scale capitalism — and large-scale wars. If the Trump regime has its way, we’ll see a similar reversion.

But Lewis and Maslin note that each transition arrives faster than the previous one, and a fifth transition could be upon us very soon. The Great Acceleration is accelerating. In the past 40 years, we have digitized 500 times the information coded biologically in the human species. We consume more energy than ever before, and our demand for it will increase by 48 per cent between 2012 and 2040. More people are travelling and exchanging more information.

Accelerating into a wall?

The authors argue that “The simultaneous rapid increases in the number of people, level of energy provision and quantity of information being generated, driven by the positive feedback loops of reinvestment of profit, and ever-growing scientific knowledge, suggest that our current mode of living is the least probable of our three future options. Such rapid, radical changes suggest that a collapse or a switch to a new mode of living is more likely.” 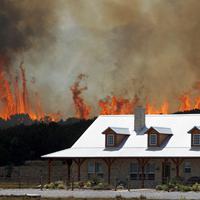 This involves moving much faster to renewable energy sources and leaving the damn fossil fuels in the ground. It also involves carbon capture and sequestration, on a far greater scale than was accomplished by the destruction of the American indigenous civilizations. So we might plant new forests and burn their wood for energy while trapping and burying the carbon dioxide emissions.

Lewis and Maslin don’t say much about what an egalitarian, low-emission global society would look like, nor how we might get there. They suggest some form of universal basic income that people could live on without having to take climate-damaging jobs, and they argue for “Half-Earth” — taking just half the planet’s land and seas for human use, and leaving the other half for the rest of the biosphere. So we might establish long corridors running north-south or from sea level to mountain tops, enabling plants and animals alike to find a survivable climate. Meanwhile, we’d have to find ways to feed, shelter, and clothe 10 billion people out of our half.

Such measures may sound both odd and impossible, but they’re more likely to save us than expressing pious ambitions for 1.5ºC while continuing to pump oil and gas to all takers. Those who read The Human Planet will have a clearer picture of the trap we’re in — and of how our ancestors got us out of comparable traps.