[Editor’s note: Rod Mickleburgh's new book On the Line: A History of the British Columbia Labour Movement tells "dozens of vivid stories about remarkable men and women who were literally fighting for their lives - and for ours," wrote Crawford Kilian in his review. This excerpt recounts a strike that shaped the then fledgling IWA.]

Labour history is often a tale of the unpredictable.

Certainly, no one could have foretold that a former whaling station on Texada Island with the unglamorous name of Blubber Bay would be the site of the first critical strike by a newly formed organization that for decades would be the province's largest and most important union. The eleven-month strike in 1938-39 by the International Woodworkers of America resonates still, with its combination of workers fighting hard for their union - and company and police actions that were shocking even for those repressive times…

Along with other governments across Canada, the province aligned with powerful business interests and police to clamp down on union organizing at every turn. While thousands joined the IWA in Oregon and Washington, encouraged by U.S. labour legislation, B.C.'s 25,000 woodworkers remained virtually unorganized, stymied by persistent company refusals to recognize any union or bargain collectively.

And why not? There was no legal compulsion to do either. When a union did strike for recognition, police were regularly dispatched to protect strikebreakers and break up union protests, while company blacklists ensured that pro-union loggers found it difficult to obtain work. In this imposing environment, successful strikes were few and far between.

Finally, in 1937, with a stated goal of furthering labour harmony in B.C., the Liberal government of Thomas Dufferin "Duff " Pattullo passed the Industrial Conciliation and Arbitration Act (ICA). The legislation mandated conciliation, then arbitration, to settle labour disputes. It also recognized a few union rights. But tellingly, it put company unions and ad-hoc employee groups on the same legal footing as legitimate unions. Employers remained free to ignore unions chosen by the workers, a situation unchanged since the first organizing efforts of Nanaimo-area coal miners in the early 1870s. Still, as part of its recent embrace of reform over revolution, the BC IWA decided to give the ICA a chance at Blubber Bay.

The one-time landing spot for removing blubber from captured whales on the northern end of Texada Island was now the site of a small sawmill and an enormous open-pit limestone mine. For thirty years workers, many of them Chinese, had quarried the 250-foot-deep "glory hole" with little labour turmoil, despite wretched working conditions. But an obstinate new manager and a wage cut spurred the workers to join the IWA. A six-week strike brought a modest wage adjustment and promises by the Pacific Lime Company not to single out union activists. Instead, once production resumed, PacLime fired local president Jack Hole and 22 other pro-union workers. 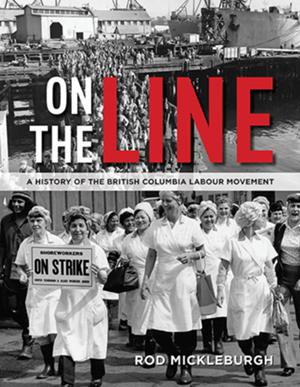 Rather than strike again, the IWA opted for the ICA. After lengthy hearings, the arbitration board appointed under the act recommended reinstatement of those fired. But the board refused to recognize the IWA as the workers' union, allowing PacLime to brush off the recommendation. The ICA had proven useless. On June 2, 1938, after an angry public meeting, two-thirds of the company's 156 employees walked off the job. For the union's credibility, this was a fight the IWA had to win.

It turned into a strike like no other, where authorities acted as a law unto themselves, reminiscent of the Deep South. Along with the usual trappings of a company store and company housing, PacLime owned virtually all property and every facility in the community. During the strike, children had to obtain a pass to cross company roads merely to attend school. Strikers were denied access to telephone and telegraph services. When union leaders were able to find a phone, police monitored their calls. Strikers were followed and often thrashed by company thugs if they wandered too far astray. High barbed-wire fences surrounded PacLime production sites. The officer in charge of the squads of provincial police sent in to protect strikebreakers helped recruit the scabs from provincial relief rolls.

Chinese strikers were ordered out of their bunkhouses. When union lawyer John Stanton entered the bunkhouses to retrieve some of their belongings, he was arrested. Other workers were evicted from their small family homes. On an island under police and company rule, union members had to find a way to survive. One of the few private property owners allowed members to set up camp on his meadow just outside town. Donated provisions, including tons of vegetables, had to be brought in from Vancouver. The Chinese strikers were particularly resourceful. By travelling in groups and letting it be known they were not afraid of a fight, they were left alone by company vigilantes. They slept in shifts in tents, deftly scrounging Texada for food.

In the unfortunate vernacular of the day, the IWA's John McCuish saluted their resolve: "There was a lot of Chinamen. They went out on the docks and rocks, and caught rock cod. They killed deer. There were quite a few pheasants on the island, and they lived mostly on that... Them Chinamen were solid. I never seen such a bunch as solid as they were." The IWA took pains to ensure Chinese strikers attended and voted at union meetings. "There can be no differentiation between a worker, whether he be white, yellow or black," a union rep told the ICA hearings. Union demands included a base rate of forty-five cents an hour for all employees.

Success depended on stopping the flow of strikebreakers. Whenever Union Steamship delivered a group of new workers, confrontations erupted on Blubber Bay's government wharf as police physically prevented strikers from stopping them. At times emotions boiled over. The worst incident took place in mid-September, three and a half months into the strike. As the steamer Chelohsin lowered its gangplank, local vice-president Bob Gardner yelled, "Here come the scabs among us!"

Strikers rushed forward, trying to get at them through heavy police lines. Clubs and tear gas drove them back. Police continued the chase along local roads, while strikers and company employees hurled rocks at one another. Eleven wound up in hospital in Powell River. Twenty-three strikers were arrested. That night, Bob Gardner, one of those arrested, was taken into a private room and beaten by Constable Andrew Williamson, suffering four broken ribs.

The next day, forty members of the Pulp and Sulphite Workers journeyed over from Powell River to warn police commander T.D. Sutherland that if police didn't cool it, four hundred of them would be back "and we won't fool with you bastards." The day after that, sixty striking seine-boat skippers dropped anchor at Blubber Bay on their way to Vancouver. They left in the morning, buoying the strikers with a chorus of defiant horn blasts. 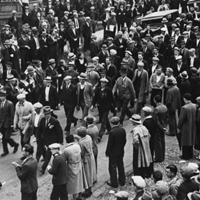 Despite the strikers' resolve, the arrests from the dockside fracas did them in. Not only did they lose their leadership, defending those charged sapped the union of funds and energy. Charged with rioting and unlawful assembly, strikers were tried in groups of four, giving proceedings an aura of show trials. Twelve were convicted, sentenced to four to six months of hard labour at Oakalla prison. In a rare turnabout of justice, Constable Williamson also got six months at Oakalla for his brutal assault of Gardner.

With local leaders in jail, its coffers drained and PacLime operating normally, the IWA decided further resistance was futile. After eleven months, picket lines came down and the IWA virtually disappeared. While organizing drives thrived in the United States, B.C. remained a burial ground for industrial union aspirations. It took the coming war for 70 years of government anti-unionism to loosen and finally provide a fairer playing field for workers to organize. Bob Gardner would not be around to celebrate. Sentenced to four months in Oakalla, the 44-year-old former train engineer, still ailing from his injuries, contracted influenza while in prison and died.

As the worst of decades neared its end, it seemed as if the forces of law and order had become hooked on bashing anyone who rose up to demand change. For those who were not British subjects of the Commonwealth, there were arbitrary deportations with no right to appeal, regardless of their roots in the province. In Princeton, Vancouver, Anyox, Corbin, Blubber Bay and even in Regina, the recipe was the same: British Columbians who challenged the existing order were to be trampled.