I feel kind of sorry for Guy Ritchie. 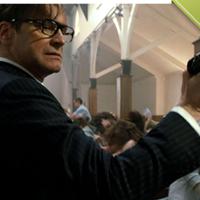 The poor guy never seemed to fully recover from being Mr. Madonna. In every photo of the then-married couple, Ritchie wore a look of stupefied stunned terror. All the braggadocio of his first film (Lock, Stock and Two Smoking Barrels) seemingly deserted him and he was reduced to making vanity projects with his wifey-poo (witness the cinematic atrocity that was Swept Away). Now the poor sod doesn't even rate a name credit on his newest film. If you will notice all of the posters for Ritchie's latest The Man from U.N.C.L.E. state that it is from the "same director as Sherlock Holmes and Snatch."

How sad is that?

While we shed a little tear for the shrinking testicles and directorial clout of his Mr. Ritchie, another director, who suffered an even more spectacular fall from grace, was also having a moment this week.

Director Michael Cimino (The Deer Hunter, Heaven's Gate) took to the stage at the Locarno Film Festival to address the state of modern day cinema. While Mr. Cimino might just be insane, he had a few interesting things to say. In particular, he talked about "Xerox films" -- meaning films that are simply copies of other movies.

We are living in a Xerox world in mainstream cinema at the moment, if the number of remakes is any indication. The Man from U.N.C.L.E. is only the most recent example, but there are many upcoming do-overs including Ghost Busters, Point Break, Spider Man, The Magnificent Seven, Police Academy, Meatballs and Bill and Ted's Excellent Adventure. There is even a remake of Jumanji planned for Christ's sake.

Studios are now remaking films that weren't even very good to begin with. "What the hell?" one may reasonably ask. If you add in the number of sequels also in the works including Bad Boys, Underworld, Resident Evil and of course, the granddaddy of them all Star Wars, you may come to the conclusion that there are no new ideas in the world. The Man from U.N.C.L.E. will not convince you otherwise.

The film is an adaptation of the 1960s television program featuring a pair of American and Russian spies, who team up to fight something called T.H.R.U.S.H., which is not an international conspiracy of evil songbirds, but the usual cabal of bad men trying to take over the world. Yawner, as they say. I never watched the television show as a child, so I have no frame of reference for how far the film has drifted, or not, from its point of origin. But that matters little. Everything here is familiar, all the hits from spy capers past, present and future -- no tropes left un-groped, if you will. Cool cars, big boobies, gadgets, dune buggies, nuclear missiles, nice suits, and Nazis, always the Nazis. Aren't they really behind everything?

The Man from U.N.C.L.E. has been in development hell for many years, with different directors becoming attached at various points, until Guy Ritchie got the gig. Now the film has finally staggered into theatres, aiming for the same cool turf occupied by Mr. Bond. (Ian Fleming also penned the original television series called Ian Fleming's Solo, a title that brings to mind certain onanistic practices.)

I am not adverse to a little spy versus spy action, and the initial premise of the film is intriguing enough. An American sneak thief turned government agent named Napoleon Solo (ridiculous I know, but it still works) is given a mission to recruit a beautiful East German woman named Gaby (Alicia Vikander). Seems Gaby's long-lost father was an Eastern German science type who invented some nifty bomb technology, and she is the key to the Americans getting their hands on newest developments.

It is 1963 and already Cold War tensions are beginning to spike. As Mr. Solo (played by human mannequin Henry Cavill) makes his way into the heart of East Berlin, the stage is set for a superpower showdown. The Russians have their own man in the field, a bit of Soviet socialist realism come to hulking life. Illya Nickovitch Kuryakin (played by slightly taller mannequin Armie Hammer) is a hotheaded, big shouldered creature, possessed by fits of quaking rage, but loyal to Mother Russia.

The three meet in the bleak streets of Berlin. Mr. Solo attempts to make off with the girl while Mr. Kuryakin attempts to stop him. This bit of fizziness involves a car chase, some punch-ups, bit of shooting, and a near escape via improvised zipline. Which all sounds rather giggly good fun -- and make no mistake, it actually is -- but from there things go precipitously downhill. Sagging like a deflated balloon, or perhaps, Mr. Ritchie's penis.

In face of global annihilation from nuclear attack, the CIA and the KGB kiss and make up, each putting forth their best men to rescue the world from imminent disaster. All of this setup moves at a turgid pace, which is not helped by the scenes meant to establish character. A man of bon mots and good suits, Napoleon Solo is presented as the coolest cat to ever strut the streets. Cavill plays him like he's made of chilled Brylcreem. In contrast, his new partner Kuryakin is a human volcano about to blow. The female member of their party's main job is to look cute in short skirts.

Leaving aside the gender politics, which are as fusty as a moth-eaten bearskin rug, everything feels weirdly wrong. What ought to pop and fizz simply plops along. If Mr. Ritchie was aiming for sleekness and suavity, what he ends up with is a stagnant muddle.

Whatever the gaping plot points, or ponderous action, the film certainly has style. Pucci, Scavullo et al, the swinging sixties fashion is well represented. It's all lacquered lipstick and thick eyeliner, race cars and cigarette holders. It's fun to look at, but like a museum piece after a time, there is a certain stultifying atmosphere in such endless attention to fashion. It doesn't help that both male leads resemble live action Ken dolls or Sears Catalogue models, complete with weirdly awkward sexual poses dans le underpants. But even the campiness of this isn't quite enough to translate into actual enjoyment.

There is the occasional perky bit, such as Gaby getting drunk and dancing around in giant Paco Rabbane-style sunglasses, much to the annoyance of her partner in crime. Or a speedboat chase that reads like an aquatic Keystone cops routine. But mostly there are interminable scenes of moneyed sociopaths wafting about in caftans making veiled threats. Hugh Grant pops in to add a bit of dry British biscuit humour, but even this late addition cannot rescue the thing from its overall enervation.

In these dog days of summer, one would think this film would be just the ticket: a bit of stylish fluff and a few feats of international espionage. I am still scratching my head over the limpness of the thing. Especially given the marketing blitz designed to convince otherwise. "Hot! Sexy! WOW!" scream the pull quotes.

In keeping with the Xerox moment motif, there already been a number of spy movies released this summer, including Melissa McCarthy's Spy, another Mission Impossible with the well nigh unstoppable Tom Cruise. There is still more to come with another Bond film in the pipe and Tom Hanks's Bridge of Spies. The genre shows little sign of slowing down but it also feels dated, stale and increasingly formulaic.

Maybe it is hard to care about these films because fall under what is quaintly termed "industrial entertainment." Or is there something more complex at work? Cultural exhaustion, boredom, call it what you wish, there isn't very much to get excitable about.

Let me return to crazy old Michael Cimino for a moment. It takes a certain commitment to fail as spectacularly as he did. Failure doesn't seem to be much of an option anymore, hence the unending stream of remakes, sequels and safe bets that tumble forth from into the hellhole that is the Cineplex.

You might, quite rightly, point out that expecting innovation from mainstream studios is a bit silly. And you would be correct. There are plenty of other options out there at the moment, succeeding with little more than courage and an iPhone. Look only at the wonder that is Tangerine. A number of other similarly wildly inventive films are also currently in theatres including Dope, Ex Machina, and Diary of a Teenage Girl.

Occasionally I feel like we are living in some Tale of Two Cities moment -- it was the best of times, and really, it was the worst of times. The rest of the opening paragraph of Mr. Dickens' famed novel still seems particularly on the nose. Almost painfully so:

You could apply this statement to the current state of cinema, if not all of our current cultural moment, with some degree of exactitude.

That's the thing about real art: it always fits.