Adam Curtis's newest film Bitter Lake was released online a couple of weeks ago. In the words of the filmmaker, it is "the story of Afghanistan and what has happened there over the past 60 years." 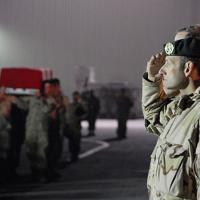 What Went Wrong in Afghanistan

If you're familiar with Curtis's previous work (The Century of the Self, The Trap), you know what to expect. Bitter Lake employs similar techniques of historical mashup, music, and a barrage of ideas and images, with Curtis narrating in the milk-pale accent that comes from a formidable English education.

The film had its premiere at the Rotterdam Festival before being released on the BBC iPlayer, and the timing is curiously ideal. Stories about people being beheaded, thrown from buildings or burned alive flood the news. How did we come to this place? If you want a detailed, almost to a fault, explanation of how ISIS came to be, Bitter Lake is an excellent primer on the rise of fundamental extremism, beginning in the sands of Saudi Arabia.

The death of King Abdullah a few weeks back suddenly brought the Kingdom of Saud back into the news. But Curtis's argument is that the Saudis were there all along and have played a very large role in the increasingly violent and unstable world in which we now find ourselves. He summed it up in an article for the Telegraph:

"In 1929, the King of Saudi Arabia machine-gunned many of the Wahhabist radicals in the bleak sand dunes of Arabia because they wanted to go on and create a caliphate across the Islamic world. Ever since then, the Saudi royal family have tried to deal with this unstable force by exporting it beyond their borders. Bitter Lake shows how, when the Russians invaded Afghanistan, the Saudis encouraged its young radicals to go and fight in Afghanistan. They brought Wahhabist ideas with them to the camps in the mountains. To begin with those ideas lay dormant -- but when Afghanistan collapsed into chaos in the 1990s, Wahhabism became more and more influential. It powerfully influenced bin Laden's thinking -- and then spread further, through the chaos of Iraq after 2003. As it did so, it reverted to the dream of creating a caliphate based on an imagined vision of the past. Out of this has come ISIS and the horrors in northern Syria. And ISIS, with its stark simplification of the world into black and white, is just the enemy that fits with the Western political vision. The jihadists and our leaders are locked together into a bubble that divides the world into Goodies and Baddies."

This is, in essence, the plot of Bitter Lake. But to get straight to the point is kind of missing the point in a film like this. I have watched it twice now (all 137 minutes) trying to piece together its disparate parts into one whole, and failed abysmally. Bitter Lake is nothing if not epic, almost exhaustive, in scope. Even the making of the film itself was an odyssey of sorts. Curtis fashioned his film from the rushes of every piece of BBC footage shot in Afghanistan. Somewhere in the bowels of the Beeb, Curtis has been hard at work, gleaning pieces of footage and sewing together the different fragments into an intricate web, studded here and there with remarkable stories that almost require films of their own.

The film takes its title from a meeting held between King Abdulaziz of Saudi Arabia and Franklin D. Roosevelt on a boat in the middle of the Great Bitter Lake of the Suez Canal. The meeting took place not long after another curious get-together between Stalin, Churchill and Roosevelt (the Yalta Conference). Both events had a rather significant impact on the state of world history. At Bitter Lake, the U.S. and the Saudis signed a secret agreement that guaranteed the U.S. would receive secure access to oil and in exchange the Saudis would benefit from American military expertise. But there are two meanings to the title of Curtis's film: the first is readily apparent; the second more oblique, referring as it does to the body of water at the centre of Andrei Tarkovsky's science fiction epic, Solaris.

Solaris, for those who fell asleep already, tells the story of a Russian astronaut sent to investigate a series of weird happenings in a space station orbiting a strange oceanic planet. The crew has discovered that the water possesses some form of sentience and have been bombarding it with radiation in order to control it. For their efforts, they have all gone mad. If you want to be literal about it, Afghanistan is that alien body of water.

The intentional barrage of raw and often disconnected images in Bitter Lake is not unlike a sea itself. It may make you feel crazy too, but if you let it sink in, certain recurring motifs leap out. There are many scenes of people dancing, whether it be a group of bejewelled and bedecked English gentry, Ukraine soldiers or Afghan people themselves. Home movies, cracked and stippled with age, unfurl alongside B-roll from news stories and journalism pieces. Fragments of different stories are offered up with no explanation, and little context. A camera lens spotted with blood, a little girl with amputated legs and a lopsided tinsel crown, a bird atop a soldier's helmet -- the viewer takes in all of these things and searches for points of connection. Music also plays a pivotal role, undercutting the action or adding sly commentary, whether a Kanye West or David Bowie tune. But the central idea, despite the endless parade of imagery, is the history of Afghanistan and by extension much of the modern world.

Curtis begins the narrative in the 1940s with the creation of the Grishk Dam, a giant project in Afghanistan's Helmand Valley. The project, put together with American support and ingenuity, was massive in scale but ill-conceived from the very beginning. The soil was too salty to support crops other than opium poppies, which took to it like mad. The intent was to take the country into the future under the leadership of King Mohammed Zahir Shah, who envisioned a grand social experiment like that enacted by Roosevelt during the Depression.

From there continues a very circuitous journey through the Soviet-Afghan war, the rise of the neo-cons (Thatcher and Reagan), the escalating power of the financial sector, and finally, how the consequences always catch up to you sooner or later. Many of the decisions undertaken in Afghanistan, whether the building of the Grishk or the arming of the mujahedeen with U.S. weapons, had "unforeseen consequences" as Curtis dryly states. There is an element of pitch black comedy in Bitter Lake, stemming from the use of clips from Carry On... Up the Khyber (1968) to the frequent use of the phrase "dropped a large bomb on him."

Through it all, the calm and reasoned voice of filmmaker Curtis functions like a light in the darkness. His clipped delivery and the brisk tone marches you along, and the idea that Afghanistan has been the graveyard of empires seems to come eerily true again and again. The British were the first to leave the country in tatters. The Russians fared little better, and now it is the Americans' turn. In the battle to create a good society, things get confusing very quickly. Who is good and who is bad? The Taliban overthrew corrupt warlords, who were in turn helped back to power by American money. Corruption spread into every part of Afghan society. The police transformed into armed militia, active in the drug trade and began terrorizing ordinary people. But the Americans were not innocent either, as the case of Jack Idema made clear. As Curtis states with glorious understatement: "It all goes horribly wrong."

Curtis quotes Soviet journalist Artem Borovik, who was the first to draw the connection between Solaris and the Soviet experience in Afghanistan. Writes Borovik in his book The Hidden War: "We thought that we were civilizing a backwards country by exposing it to television, to modern bombers, to schools, to the latest model in tanks, to books, to long-range artillery, to newspapers, to new types of weapons, to economic aid, to AK-47s. But we rarely stopped to think how Afghanistan would influence us -- despite the hundreds of thousands of Soviet soldiers and officers and the scores of diplomats, journalists, scholars and military and political advisors who passed through it."

Curtis, echoing Borovik, explains that the uncertainty and deep mistrust brought back by Soviet soldiers, saddled with mujahedeen ghosts, helped to bring about the fall of the USSR. Like in Tarkovsky's film, the alien ocean fights back with visions and madness. The extension of Curtis's thesis is that the U.S. in turn has been similarly infected by its experience in Afghanistan, and has taken this uncertainty and distrust back to the heart of America. "Exposing the emptiness and hypocrisy of many of our beliefs.... Knowing that underneath we believe in nothing," he states.

At a certain point in the story, you begin to despair of humanity at all levels. No one is innocent and even the most well-meaning interventions seem to go horribly wrong, making things worse than they were before. In this Curtis is perhaps stacking the deck a bit, as scenes of the Saudis are given a leitmotif derived from John Carpenter's horror film The Fog -- another story of injustice and evil that comes back around for a terrible act of vengeance and retribution.

Echoes and palimpsest of the past return again, rubbed out and scratched over by subsequent authors seeking to make their mark. Curtis argues that the desire to return to an imagined past is at the heart of the jihadist movement, but this desire is fundamentally a human one, and one that the filmmaker himself has explored time and time again. The expanse and scope of the film defy any quick summation, and even keeping hold of the different plot points is a challenge. Whether this was intentional or a result of the methodology employed (all that raw footage), it is easy to drown.

The final resounding image of Bitter Lake is taken from Tarkovsky's Solaris, in which the central character is surrounded on all sides by an alien ocean, capable of endlessly manipulating reality. A more apt symbol for the sense of being adrift in a veritable sea of image is hard to think of, and I wondered at the idea of Curtis sitting alone at his desk, skimming through endless reams of footage, searching for meaning and finding only ghosts.