Though the official announcement of Scott Walker and Sunn O)))'s new Soused LP came just a few months ago, the prospect of an epic and probably insane collaboration between the '60s pop prince-turned-experimental sound auteur and the speaker-blasting American drone metal outfit has been dangling for some time now. 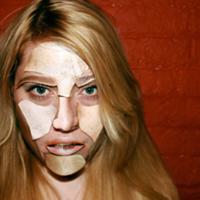 Originally, gloomsmiths Sunn O))) (Greg Anderson and Stephen O’Malley) had asked Walker to take part in the recording sessions for their 2009 effort, Monoliths & Dimensions, but he had to decline. The vocalist's 2012 effort Bish Bosch, however, featured overpowering, paint-peeling waves of sustained fuzz-bass work akin to Sunn on tracks like "Corps De Blah," perhaps planting a seed to reconnect with the outfit.

Finally plucked from the conceptual abyss, the five-song Soused submerges listeners into a darkened soundscape of avant garde arrangements, ear-blistering guitar noise and the unsettling presence of Walker's wavering vocals.

Despite this, the first few notes of "Brando" come out surprisingly sunny. Sounding something like an inverted mash-up of Snow White's "Some Day My Prince Will Come" and Guns N' Roses' "Sweet Child O' Mine," the mix of Walker's quasi-operatic vocals, a shimmering bed of electronics and golden guitar god licks make for one of the most pleasant introductions to an LP this year. From there, though, things get, well... a little freaky.

The rest of the nearly nine-minute composition is filled with ominous, overbearing bass and the most satanic wind instrument sounds this side of a Krzysztof Komeda score. This is only intensified by Walker's quivered out confession that "a beating would do me a world of good," which pairs nicely with the steady, punitive crack of a bullwhip. An interview had the vocalist confessing that the lyrics reference the multiple on-screen beatings Marlon Brando endured in his movie career.

Across the board, Soused keeps things unsettling. The hint of conventional rock riffing presents itself on the opening moments of "Bull," only to be upended by bleak, Latin-sung ejaculations and the record's most epically stretched-out moments of distortion. "Fetish" melds horror score keyboards, what could be the grinding of a belt sander on bone, shamanic chanting and, most surprisingly, a straightforward backbeat with the imagery of blackness "winding through grip-mangled fingers."

As could be expected, "Lullaby" likewise does not make for the best bedtime music. The spaciously paced arrangement features but a few clicks and clacks as Walker outlines a situation in which he's soliciting his musical services. "The most intimate personal choices and requests central to your personal dignity will be sung," the singer promises before bellowing out: "Hey nonny nonny!" Daemonic and detuned string-damaging sounds soon surface from the Sunn crew to keep things extra petrifying.

"Why don't minstrels go house to house, howling songs the way they used to," the avant garde madman ponders in the piece, a reworked version of his "Lullaby (By-By-By)" contribution to German singer Ute Lemper's 2000 album Punishing Kiss. To put it bluntly: it's one thing to keep to yourself with Soused cranked on the stereo, but it's quite another to imagine Walker crossing your neighbourhood late at night, using a crooked creeper's croon from the other side of a peephole to keep you company. If, by chance, he does come knocking at your door, you're going to need a drink.