If for nothing more than brand synergy, the unveiling of Apple's long-awaited iPhone 6 alongside the surprise release of U2's new Songs of Innocence LP this past Tuesday made for a "Beautiful Day" for both parties. The move itself reunited the Irish rock legends with the house that Steve Jobs built, having previously teamed up in 2004 to produce a signature, black-and-red coloured iPod loaded with How to Dismantle an Atomic Bomb. U2 vocalist Bono quipped with the company's CEO at this week's product launch in California: "We're the blood in your machines, oh Zen master of hard- and software Tim Cook." 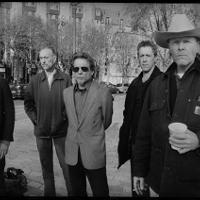 The Intense and Unpractical Band We Call Swans

Markedly different than the last time around, though, you're not going to have to shell out a couple hundred dollars to hear the new U2 on your Apple device; the band is offering up the entirety of the album for free on iTunes ahead of a physical street date of October 13. For fans waiting five long years for the "best band in the world" to follow up 2009's undervalued and ethereal No Line on the Horizon, the freebie status of Songs of Innocence is sure to please. The tracks on U2's 13th full-length, however, can be a bit of a mixed bag.

U2 - Songs of Innocence

"The Miracle (Of Joey Ramone)," which the group also premiered live at the Apple event, doesn't find U2 delivering a glue-sniffing punk rock paean to the king of Queens. Instead, via arena rock chords and a slinking Spoon-meets-showtune groove, it has a lost Bono finding solace after having "heard a song that made the sense out of the world." Whether that means he discovered the pragmatism of beating on a brat with a baseball bat or decided not to be a pinhead no mo', we may never know.

While there aren't any oversized "Discothèque"-style blunders, it may just be how unassuming the front end of the LP is that disappoints. There's nothing specifically wrong with either "Every Breaking Wave" or "California (There is No End to Love)," the latter of which flirts with a mildly Beach Boys-ish "ba-ba-Barbara" vocal pattern in the intro, but both hang themselves up on the pleasant but basic four chords-and-a-backbeat template the group eased into around the turn of the century. Even "Volcano"-- a song hinting at the need for a cathartic, explosive release ("Something in you wants to blow") -- feels a little too 'lax, ultimately lacking both tectonic plate-disturbing tension and a lava-spewing resolve.

Things get cooking, though, once "Raised by Wolves" kicks in. Here, executive producer Danger Mouse begins to shine, manipulating Bono's percussive, jagged edge vocal ticks around strings, stabbing piano and Larry Mullen Jr's pounding beatwork. The most political number of the set, it finds the vocalist referencing the 1974 Dublin-Monaghan bombings, specifically a Ford Escort that exploded near a department store. "The worst things in the world are justified by belief," Bono sadly summarizes.

"Cedarwood Road" manages to mix rugged outlaw rustling with textured electronics, while "Sleep Like a Baby" pushes the latter even further by bringing a Boards of Canada-grade bed of keyboards to the forefront, along with a most suitable music box-assisted melody. "This is Where You Can Find Me" floods the senses with seagull sounds, soulfully chanted gang vocals, and the wild wiggle of a sci-fi Theremin. Playing the punk card again, U2 dedicates the track to fallen Clash leader Joe Strummer.

Though it's not a perfect album from the iconic Irish outfit, that honour going to both The Joshua Tree and Achtung Baby, it's pretty damn good for something you just downloaded for free. If only the Apple gods gave us the goods pro Bono the next time they partner with U2 for a product launch.