[Editor's note: With news this month that past and present female officers continue to join more than 300 others in widespread claims alleging sexual harassment against the RCMP, we present here an excerpt from Janet Merlo's No One to Tell: Breaking My Silence on Life in the RCMP, published by Breakwater Books in 2013. Merlo was among the first female officers to make public allegations of harassment and discrimination in the force. In this excerpt, she discusses why she believes there are few women in the higher ranks. Merlo's case is ongoing.]

There are very few women in the higher ranks of the RCMP, and when a woman does rise, her promotions are met with skepticism. If she's an attractive woman, it's generally assumed that she slept her way to the top. If she's seen as less appealing, hers is considered a token promotion. When I was in uniform, even women were guilty of making those assumptions about other women in the upper ranks. Maybe it's because we knew how women were perceived within the organization, how little respect we were afforded. It was hard for any of us to believe that a woman was promoted based on merit when we knew damn well that women's abilities and intellect were not highly valued or recognized -- and when we knew there were a lot of high ranking men who couldn't stand the idea that a woman might outperform them. 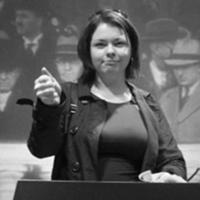 In 2012, the RCMP published a gender-based assessment after a study was done to examine whether the promotion and recruitment policies were gender neutral. The report's executive summary emphatically declares that they are neutral, yet the findings also reveal that women are less likely to receive encouragement to enter the Officer Candidate Development Program, the pathway to being appointed a commissioned officer. In fact in 2012, when women accounted for about 20 per cent of RCMP members, they still held only about 10 per cent of the commissioned officers posts, and very, very few had ever cracked the senior management of the organization.

There were over 4,000 study respondents, male and female, and they identified two significant concerns that impact the desire to seek promotion. The first is a perceived lack of fairness and transparency in promotional processes; the second is the desire to be promoted based on merit. While 51 per cent of male non-commissioned officers had applied for two or more positions, only 38 per cent of women had.

Some of this may be explained by gender differences (whether nature or nurture). In my experience, most women are not as rank oriented and not as single-minded in their desire to get ahead. And that's not because women aren't leadership material.

Women are ambitious. They do have the desire to lead and to make changes. They just don't want to play by the rules the men have made or compromise their pride or integrity for a promotion. To climb the ladder, they have to battle both the rank structure and the male-dominated hierarchy of the RCMP. For a lot of women, the battle just isn't worth it. When taking a stand at the office gets you labelled a bitch, when refusing to shut up and go along leads your boss to publicly declare that you're obviously suffering from PMS, it gets damn hard to find the strength of conviction to continue.

In my first few years in the RCMP, I'd maintained my silence about a supervisor who had a naked blow-up doll next to his desk and a superior who'd yelled at me to keep my legs shut. But when I overheard female applicants for a newly formed bicycle patrol unit referred to as "ugly, fat-assed female members" in a conversation between another member and our boss, I couldn't keep quiet. Maybe it was easier to confront something that didn't have anything directly to do with me. I went to the superior and complained about the degrading way they'd spoken about women. He just scoffed at me and sent me on my way, though later the junior member he'd had that conversation with came and apologized to me.

Other instances of discrimination were more insidious. Male officers were given permission to take hours-long hockey breaks while on shift. It was deemed important to their fitness. But when another female member and I asked if we could take a one-hour aerobics class on a Tuesday, which would impact two shifts a month, we were told no. Just flat out no.

The RCMP talks about upping its recruitment of women. But no matter how close to equal the female to male ratio gets on the force, until they can acknowledge that a gender-based discrepancy exists, and until they change the fundamental philosophy and structure of the organization, they won't really begin to address gender equity.

It's no surprise to me that the 2012 study also reveals women in the RCMP are more likely than their male counterparts to grow frustrated and leave the organization after 20 years rather than stick it out, hope for improvements, and shoot for a full pension.

When the story of Robert Pickton and Vancouver's Downtown Eastside prostitutes began to emerge, I thought about the way some of my male co-workers treated female members, and I thought about my time on the street [in an undercover operation] as a hooker. I considered the connecting points. If police officers could feel such animosity toward the women who were their co-workers, trained by and committed to the same organization, then how did those men feel about women who were considered, globally, the lowest of the low? It is reasonable to think some of those women would still be alive if they'd been considered more valuable -- valuable enough for someone to pay attention and launch an investigation earlier.

It's not about individual officers who are to blame, though. It's systemic. Budget constraints, operational plans, and local municipal priorities always take precedence over what any street cop might deem a priority while rushing from one call to the next.

Still, for me there is an echo between the RCMP management's treatment of women within its ranks and the treatment of sex-trade workers. And the sound that reverberates says, "You are expendable."