As it turns out, Ramadan is not an ideal time for a book tour. 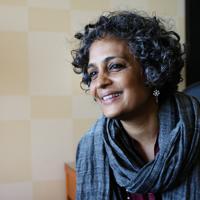 'Another Way of Looking at the World'

Between readings, travel, media appointments and the occasional time zone shift, fasting from dawn until dusk every day adds an extra strain to the literary hustle.

But Zarqa Nawaz -- creator of the CBC sitcom Little Mosque on the Prairie and author of a new memoir Laughing All the Way to the Mosque -- says she's up for the challenge. "They promised I could eat," she quips of her July 9 appearance during Vancouver's Indian Summer Festival, a storytelling event likely to extend past sundown.

Such grit and resilience has carried Nawaz through several career transformations. With a journalism degree from Ryerson, she first made a name reporting at CBC's Newsworld and CTV's Canada AM. Growing bored of journalism, she then took a summer workshop at the Ontario College of Art and Design and produced short films with titles like BBQ Muslims and Death Threat.

In 2005 came another big career leap: she pitched a television sitcom. Her proposed Little Mosque on the Prairie would shine a light on a mosque housed in a rented church basement -- a story centred around Muslim characters living in small town Saskatchewan.

The odds weren't exactly in her favour: Nawaz had never worked in scripted television, and she was a woman in comedy to boot. With both Islamophobia and the traditionalist Muslim community working against her, Nawaz forged ahead with a show that wasn't afraid to touch on racial profiling, gender inequality or religion -- blemishes and all.

"A lot of conservatives said it did not give a good impression of Islam," Nawaz says of the show's early reception. (The New York Times and NPR both picked up on this controversy before the show even premiered.) "That thinking is very retrograde -- it's not looking at the wider picture. A community that doesn't have any faults has never existed anywhere."

Despite strong headwinds, Little Mosque became the first show of its kind in North America, running six seasons. 91 episodes later, Nawaz has made another leap into book publishing. Her memoir Laughing All the Way to the Mosque confirms that Nawaz's sense of humour comes from a deeply personal, spiritual place.

While she continues to write about Islam, her Twitter bio now promises: "no more projects with the word mosque in the title."

A contrarian from birth, Nawaz's book reveals that her decision to wear a hijab was in fact an act of teenage rebellion. In an effort to "beat them at their own game," Nawaz countered her parents' religious nagging by questioning their own devotion to Islam.

"Some people think hijab is used to oppress people," Nawaz writes. "It's true. I used it to oppress my parents." (Unfortunately, Nawaz's effort to "out-Muslim" her parents only resulted in her mother donning a hijab, too.)

Throughout her life, Nawaz has used witty one-liners like these as a coping strategy -- a way to reflect and explain her unique experiences growing up Muslim in suburban Canada.

"Even when I try to be serious, it never works," she says. "I did try to make a serious book, but my editor told me its not really working. She said, 'You need to write in your own voice.'"

Unafraid to push buttons with a feisty, feminist twist, Nawaz cites Nora Efron as her writing spirit guide. "Efron said 'everything is copy,'" she explains. "When anything horrible happens, you can always mine the experience for material later."

When asked what makes memoir different from television writing, Nawaz laments, "Not having nine crack comedians at your fingertips."

"We would all pitch each other," she fondly recalls of the Little Mosque writing room. "Good ideas were always recognized, and whoever was really responding would write the script. We'd punch it up as a group at the end."

Nawaz remembers projecting the script on a wall, combing line by line -- a process she sorely missed while writing her memoir. "I remember telling my agent, 'Maybe we should hire someone!' And she said 'No, this is all you.' It made me neurotic."

Despite the change in medium and process, Nawaz's chapters still read like episodes of a fast-paced television show. Rather than ordering her life chronologically, Nawaz chooses to highlight themes and lessons from selected life experiences.

Many of these experiences are set to resurface at the Indian Summer Festival this week. Nawaz will appear in conversation with actor and playwright Anita Majumdar at the Goldcorp Centre for the Arts on Wednesday, July 9. She'll also present during the 5x15 speaker series at the Fox Cabaret July 10.