"Freedom can be a scary thing, if you don't know what to do with it." 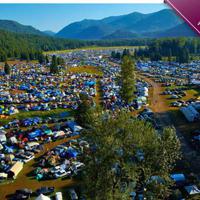 Vancouver pianist Quincy Chimich is talking about his first experience, three years ago when he was in Grade 11, at the High School Jazz Intensive, an annual project of the TD Vancouver International Jazz Festival.

Every year, a guest director travels to the festival from the Association for the Advancement of Creative Musicians (AACM), a 50-year-old radical community music organization in Chicago known for its uncompromising approach to jazz outside the mainstream.

They come to teach a collection of student musicians that there is more to jazz than the traditional big band repertoire.

Arriving in the Vancouver rehearsal room, the director greets the students with music like nothing they've encountered before. There are fewer rules for improvisation, and the written parts follow unexpected and complex patterns. The student musicians have to adjust and learn.

"At first (in the Jazz Intensive band), a lot of us were too structured when we were trying to play that kind of free music, and it was like we were trying too hard to make something happen," says Chimich.

For the past decade, the Jazz Intensive has auditioned Lower Mainland high school jazz musicians to form an 18-member residency band that rehearses for 10 days and then plays a concert on the David Lam Park stage on the final Sunday of the festival.

Some of the music they play will be traditional big band sounds, but some of it comes right out of the AACM, where many of the conventional rules for music-making are suspended.

Chicago cellist Tomeka Reid, in her second year as the director of the Jazz Intensive band, is rehearsing the group this week with some mainstream big band charts. But she's also brought along a piece by Sun Ra and two pieces by Anthony Braxton, one of the original members of the AACM back in the 1960s, who has gone on to international renown (and controversy) as a relentlessly innovative and prolific composer.

"I am excited and a bit nervous about doing the Braxton tune 'Composition 134,'" says Reid. "I hope the students enjoy it. The harmonies are just clusters -- it is not like this is a major 7 chord, it has different harmonies and it will be a test for their rhythm. It has overlapping note values and quintuplets that are off the beat, little tricky rhythmic things. I think it is super cool, but it may be new sounds for them."

For Jenny Xu, 17, a pianist in the Jazz Intensive band for the first time this year, the Braxton piece was a big surprise. "I was like, yeah, I will get there and probably we'll play Count Basie. But then we get 'Composition 134.' I know some of us didn't like it at first, but I mean, you can't really say what music is and what it isn't, and it sounds really cool. The challenge is counting. It is not that hard to play, but it is so easy to get lost in it," she says.

Reid says she has also brought along a Quincy Jones arrangement of Charles Mingus's 'Stop Boogie Shuffle' -- not quite in the big band jazz mainstream, but certainly closer than Braxton. "And I picked a piece by the arranger James Miley, kind of a mix of Ornette Coleman and Radiohead."

As for a piece by Nathan Smith called 'Supernova Factory,' Xu's response to that one is unequivocal: "It has got to be the most difficult thing in the universe."

Chimich says the Jazz Intensive is "trying to push our boundaries, expose us to things we have not seen before."

This past year he has been studying music at the New School in New York. This week he'll be leading his own group at the Vancouver festival, opening for the legendary American pianist Harold Mabern on June 27.

Chimich and Xu both belong to a youth jazz community in the Lower Mainland and the Island.

Xu, who lives in Surrey, just graduated from high school but she started her first jazz combo when she was in Grade 9 and has taken part in a variety of youth jazz festivals and honour bands since then. Her quintet, Quint Eastwood, is opening for the other of Harold Mabern's two shows in the festival.

Being in the Jazz Intensive band, in addition to getting her head around Anthony Braxton, means she gets to hang out with her friends.

"All my favourite people ended up in this band. In the rehearsal room it's hard to know where to look and who to talk to, because I just want to talk to everyone and be with everyone. I love all the individuals in this band so much."

Xu says she is enjoying working with Tomeka Reid.

"I have never met anyone like her," she says. "She has this funky energy and brings a Chicago vibe. She brings something different and new."

Eighteen-year-old trumpeter Trevor Whitridge just graduated from high school too, and this is his third year in the Jazz Intensive band. He says the new harmonic and rhythmic ideas presented by the Chicago directors have inspired him to start writing his own music, and he's working on some big band ideas now.

Whitridge, like Xu and Chimich, is no stranger to the adult jazz scene in Vancouver. For three years he's been working as a sideman and leader at places like the Cellar, Jazz Vespers and X-site. In the fall he'll start studies at the music program at Capilano College.

Whitridge says he appreciates how the Jazz Intensive supports young musicians not just with the performance experience, but with scholarships and workshops.

Every member of the Jazz Intensive band gets a bursary and there are also four scholarships, three from TD and one from the legendary Vancouver bandleader Dal Richards' music foundation.

"Trevor has won a scholarship every year," says the festival's education coordinator Flora Ware. She says scholarships are based not just on musicianship but also on "who we see as really dedicated. Trevor is very talented and bright, but also really clearly committed."

Ware is one of two people vital to making the jazz intensive work, on the ground. The other is retired Vancouver high school bandleader Bob Rebagliati, the assistant director. He conducts the auditions (this year choosing 18 band members from a field of 40 applicants), directs a pre-rehearsal before the director arrives from Chicago, and is assisting her this week by bringing his wealth of big band experience to the rehearsals.

Xu says "Mr. Reb" is part of her music community as a director, bandleader, adjudicator and advisor. "He a part of everything in Vancouver. Mr. Reb is everywhere, at music fests, everywhere I am. I love him to pieces."

Rebagliati says he is not necessarily a fan of some of the music the Chicago people bring to the band.

"I was a big skeptic originally, and then I got won over by some of it, not all of it, because I am not a free jazz kind of guy, but I appreciate the things the kids have done and learned. She (Tomeka Reid) has a Braxton tune this year that is going to be pretty wild.

"I have received some feedback from some of my musical friends, saying something like: 'Can't they just play 'In the Mood?'' I don't think that is going to happen. The philosophy of those who curate the festival is to include the more forward thinking modern-art style jazz."

One of those curators is Ken Pickering, one of the festival's founders and its artistic director since its inception in the 1980s.

"Bob Rebagliati is a legend in his own right," Pickering says. "He is an integral part of this program and without him I don't know if we would pull it off. His teaching abilities have spanned decades and many great Vancouver players have come out of his classes, even as back as far as Renee Rosnes and Darcy James Argue."

One of Pickering's legacies at the festival over the years has been his insistence on exposing non-mainstream jazz to the public. He has carefully cultivated an audience for innovative and surprising jazz that doesn't sound like the past, while still offering concerts by artists more firmly in the tradition.

"There is controversy in this era about what is or is not jazz," says Pickering. "My perspective is that jazz is a lot more than traditional big band or hard bop. What we are looking to do in the Jazz Intensive is give the kids exposure to other ways of thinking about large ensemble music that is still within the cultural framework of jazz but that goes beyond the traditional book that most teachers are using in the educational system. It is about broadening their frame of reference."

After their week of rehearsals and excited, youthful jazz camaraderie, the High School Jazz Intensive band will perform on the main stage at David Lam Park on Sunday, June 29 at noon.