At 2:46 p.m. on March 11, 2011 events began to occur that no disaster novelist (or nuclear engineer) could have imagined.

First a 9.0 subduction earthquake struck off the east coast of Japan, moving the northern half of the island of Honshu over a metre eastward. Below it, the Pacific plate moved about 36 metres westward along a fault roughly 300 kilometres long.

The quake lasted for three minutes. During the first minute, sensors at the Fukushima Daiichi Nuclear Plant picked up the vibrations and the three functioning reactors automatically began to shut down. (The other three were already shut down for routine maintenance.) Other reactors along the coast were doing the same thing, without incident, as they were designed to do.

Second, a tsunami about 10 metres high struck the plant. The seawall easily deflected it. But a few minutes after that a 15-metre wave arrived, overwhelmed the seawall, and flooded the plant.

Third, a few hours after that, three reactors were in meltdown and a spent-fuel pool threatened to boil dry and start melting down as well.

After the first shock the functioning reactors' fuel rods were no longer sustaining a chain reaction, but the heat of radioactive isotopes in the rods required continued cooling by a constant flow of water.

"If cooling is lost for more than about 30 minutes," the authors of this book write, "the water level within the reactor vessel drops about fifteen feet and fall below the top of the nuclear fuel rods. Soon afterward, the exposed rods overheat, swell and burst. The zirconium alloy cladding reacts with steam and generates potentially explosive hydrogen gas. The temperature of the fuel pellets continues to rise until they begin to melt, emitting more radioactive gases into the reactor vessel. After several hours, the melting core slumps and drops to the bottom of the vessel. The molten fuel is so corrosive that within a few hours it burns completely through the six-inch steel wall."

But it doesn't stop there: the melted fuel then flows onto the concrete floor of the reactor's primary containment. Depending on conditions, the result is either a series of violent explosions or intensifying pressure that breaks through the concrete and sends plumes of radioactive gas and dust into the environment.

The tsunami flooded the electrical power panels and emergency generators. It killed the reactors' cooling systems while causing a "station blackout" that prevented reviving those systems. This technical but fascinating book describes the consequences; physical, political and bureaucratic.

A shock felt around the world

Fukushima's aftershocks have reverberated around the world. The reactors were designed in the U.S., meeting U.S. safety standards. Much of this book, in fact, deals with the development of U.S. nuclear technology and especially with the systems designed to deal with failures.

Better said, systems designed to deal with "design-basis accidents" — accidents that seem just likely enough to warrant precautions. That's why reactors have containment shells that can survive high pressures and temperatures with leaking or breaking open. 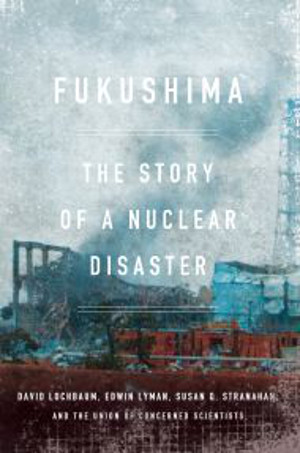 But Fukushima was a "beyond design-basis accident." Even in the quake-prone country that coined the term "tsunami," March 11 seemed too unlikely to plan for. If anyone had raised the idea of such a quake and tsunami back in the late 1960s when Fukushima was planned, they would have been politely brushed off. A 9.0 earthquake is a very rare monster, and so is a 15-metre tsunami.

Pessimism has always been unwelcome in the nuclear-power industry. The authors document how reactors were originally promoted in nuclear-phobic Japan with assurances of safety. Public hearings were stacked with nuclear employees pretending to be ordinary local residents supporting the proposed new reactors.

Moreover, Fukushima's reactors were U.S.-designed by General Electric, and reflected US safety standards. Unfortunately, those standards began to be eroded very early in the nuclear era. The Nuclear Regulatory Commission, responsible for setting, monitoring and enforcing standards, was under intense pressure from both the industry and the politicians not to be too rigorous. The Reagan administration's fondness for deregulation only hurried the process.

Even Three Mile Island in 1979 didn't have a long-term effect on raising standards. It too was a "beyond design-basis accident," and it was convenient to regard it as a one-off.

As Americans weakened their nuclear regulations, so did the Japanese and other nuclear agencies. For decades, external events harming a nuclear reactor and threatening the public were dealt with as one-in-a-billion events.

The basis of that judgment was not statistical evidence but what economist Paul Krugman calls the "argument from personal incredulity": the agencies and utilities just couldn't believe such an event, and they certainly didn't want the public to believe it either.

So Fukushima's meltdown created a 9.0 upheaval right in Washington, as the NRC scrambled to send experts to advise the Japanese on how to handle the disaster.

The Americans arrived to find chaos and confusion. The government had little idea of what was going on, because Fukushima's operator, the Tokyo Electric Power Company, didn't know either. The workers on the site were trying to understand what was happening in their reactors, and trying to keep the situation from getting any worse — which it would have, if they had obeyed some foolish orders from Tokyo early in the disaster.

The disarray of Japanese officials and Tepco executives reflected has, in some ways, continued for three years through several changes in government and uncounted apologies from Tepco. Now a government-run company, Tepco continues to deal with the cleanup though it's proven itself incompetent to do so.

Just last week, the Japan Times pointed out that 400 tons of groundwater seeps into the reactor buildings every day and becomes radioactive. It has to be pumped out and stored on the site, sometimes in tanks that leak when workers open the valves by mistake. Another 400 tons of "lightly" radioactive water goes into the Pacific from the reactor site.

Tepco plans to build an underground frozen wall to block the groundwater, and to pave the whole site so rainwater won't soak into the ground. It estimates that should reduce the radioactive-groundwater problem to about 160 tons a day.

Back to business as usual

The Japanese public is understandably unhappy with nuclear power, and when all the reactors in the country were shut down that spring, people tolerated the absence of air conditioning despite sweltering weather. Yet the current Japanese government is planning to go ahead with plans to build more nuclear plants, even though several existing reactors have been found to lie directly on earthquake faults.

The authors patiently chronicle the byzantine decision-making processes of the Nuclear Regulation Commission. After Fukushima the NRC proposed new methods to prevent hazards, but ran them through the old, slow-motion framework that had been a great convenience to the industry for years. The authors note that "Although Fukushima had proven that beyond-design-basis accident were a real threat, the NRC's obsolete guidelines still ranked them as very low-probability events."

This doesn't mean that 9.0 earthquakes and tsunamis are likely to strike Pennsylvania, but fires and floods could create station blackouts quite as effectively. The wild weather of the last few years has inflicted damage on some American reactors. None have been serious enough to cause "common-mode failure," in which all a reactor site's defences are overwhelmed, as they were at Fukushima.

Whether in Japan, Europe or North America, the nuclear industry seems to have too much invested in the status quo to consider a dramatic overhaul of the way it runs itself. It has thrived on vague "guidelines" and fuzzy goals like "reasonable protection." Real protection, enforced by real regulation, would mean far more expensive plants, and maybe not as many of them.

We are unlikely to see such protection until we have had two or three of our own Fukushimas. And we will.