Without question, one of the most surprising aspects of Godspeed You! Black Emperor's brand new LP 'Allelujah! Don’t Bend! Ascend! is that it even exists at all. While the beloved Montreal-based post-rock troupe reunited in 2010 to tour around the world following a few years off, the band never hinted at toiling away in the studio during this time. 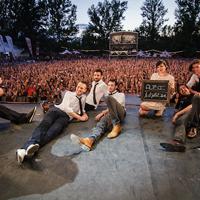 And if the group had grand plans to just play the nostalgia circuit instead of potentially damaging their thus far immaculate output -- their relatively small but game-changing back catalogue consists of three full-lengths, an EP, and an especially limited edition demo cassette, all issued between 1994 and 2002 -- who could blame them?

But just two weeks ago, Godspeed's label Constellation Records made the jaw-dropping announcement that the group would issue their first full-length effort in a decade, featuring brand new material. Well, sort of.

While the two longest pieces, "Mladic" and "We Drift Like Worried Fire," have technically never appeared on record, both pieces existed in the band's live set in some form since 2003 (and were previously titled "Albanian" and "Gamelan," respectively). Instead of splitting hairs, we should probably just herald the arrival of the songs -- as well as two additional soundscapes -- as the moody masterpieces they are.

Opener "Mladic" is Godspeed You! Black Emperor at their leanest and meanest. On the surface, it seems like the nine-piece unit is delving into its usual bag of tricks via one of their patented extended intros, but there isn't exactly a melodic resolve to the tense, distorted web of bowed strings and sinister, minimalist six-string musings. The song eventually propels itself through a thunderous back end, punctuated at various times with a strong-armed samba beat, grizzled guitar scrawl and a sea-faring mosh section that plays just a little lighter than San Francisco doom-and-gloom troupe Neurosis.

Playing to the band's political inclinations, the track ends with a field recording from one of this year's pots-and-pans-banging Casserole rallies in Quebec (take note that the liner notes for the album end with the regionally specific message: "Fuck Le Plan Nord. Fuck La Loi 78. Montreal Right Now Forever.")

"We Drift Like Worried Fire" takes on some more melodic properties, with the act exploring an elegantly simple yet hypnotic three-note guitar motif throughout most of its 20-minute run time. Like most of Godspeed’s classic work, the song starts off quietly, but progressively grows into a majestic sonic tapestry of ethereal guitar notes, airy vibraphone, and military marching beats. You'll be hard-pressed not to lift your skinny fists to the heavens with this one.

Despite the joyous nature of the tune, though, it does veer towards murkier territory around the 12-minute mark. The movement eventually spirals out of control for a last-minute denouement featuring a psych-rock styled descending riff that brings to mind both the band's "Rockets Fall on Rocket Falls" from 2002's Yanqui U.X.O. and Pink Floyd's early mind-expander "Interstellar Overdrive."

The two newer and relatively shorter pieces, "Their Helicopters Sing" and "Strung Like Lights at Thee Printemps Erable," both hover just below the seven-minute mark, and both are tonally similar washes of sound. Neither song hones in on a hook, per se, but each minimalist collusion of instruments is texturally rich and rewarding.

There's no telling at this point whether chronicling the two earlier works on record is a means of closure for the band, or if the relatively truncated soundscapes are a glimpse at what's to come, but hopefully it doesn't take Godspeed You! Black Emperor another 10 years to figure it out. To paraphrase their cry: Godspeed Right Now, Forever.