Every film director has a dream project, but Michel Hazanavicius's dream was stranger than most -- the 44-year-old French writer-director was determined to make a silent movie. "It's a fantasy I had for a very long time... I think it's the oldest fantasy I had about a movie. The oldest desire I had." 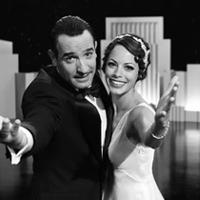 That desire begat The Artist, a silent movie about the end of silent movies that pays homage to the classics, while still clicking from reel to reel at a 21st century pace. A foreign film where nothing gets lost in translation, The Artist hasn't just become an audience darling, many critics consider it the favourite to win the Oscar for best picture.

I met Hazanavicius for a one-on-one interview in the closed bar of a downtown hotel during his movie's North American coming out party at the 2011 Toronto International Film Festival. Since Haznavicius isn't old enough for his parents to have watched silent movies in the theatres, nevermind seen them himself, I asked how he fell in love with them. "Because I'm curious and I like to watch a lot of movies. I'm not nostalgic. Ultimately, if I had to be honest, silent movies are not the only inspirational source for this work. There's a lot of directors today that inspired me as well. I knew these movies, since I started to work on the script I really watched a lot of them just to understand the rules of the game of a silent movie, because you cannot just write a story and say, 'Well, how can I do it now in a silent way?' You have to write what you know you'll be able to shoot, and you know that actor will be able to act. You better know the world of the game before you write your script."

Haznavicius has always been a fan of classic silent films, and after making two successful spy movie spoofs in a series called OSS 117 he convinced a producer to let him turn the sound off and shoot The Artist. "I met this great producer who accepted to produce that movie. He promised me that he will find the money and if he doesn't find the money he will put in his own money. And he did it. I had these two wonderful actors I wanted to work with, and I thought they were perfect for a silent movie, so that's why I made it." The perfect actors were Jean Dujardin and Hazanavicius's wife, Bérénice Bejo.

"I wrote the movie with them in my mind... I think they have ageless faces, so they are very believable in a period movie. I trust them in the way they act. But I have to say that the other actors I cast in Los Angeles (including John Goodman and James Cromwell), everybody played the game. To me the real challenge was the writing. I really didn't want them to tell the story, I just want them -- the actors -- to embody the characters and to respect the situation. And when they do that, it's almost like what they do in a normal movie, in a talking movie. And when I edit a talking movie very, very often I edit a sequence, then I cut the sound and I look at the sequence with no sound and I don't hear what people say, and I look if the story is understandable without sound... And if the story is well-written, it's going to work."

Hazanavicius says Bejo was beyond prepared for her role because she did all the same research that he did. "Bérénice came with me from the very beginning of the writing process. She came with me to every movie I watched at the French cinematheque. So she saw a lot of movies with me. And every book I read, as soon as I finished the book and put it on the table she grabbed it and she was reading it. When you write a script and direct a movie, there's kind of an immersion in your subjects. I watch movies about the subject, I read books about the subject, and at a certain point I'm really in this -- my environment is the environment of the movie. So I'm really able to speak to everyone and say, 'No, don't do this this way, yes we can do that,' because you really feel comfortable with your subject. And she did this, she did it with me. Now she knows as much as me about silent movies, silent stars, and silent producers."

I wondered if, perhaps, there was some brilliant French silent film that inspired him. Hazanavicius looked slightly apologetic as he explained that he didn't feel French filmmakers ever really created silent masterpieces. "My favourite movies as an audience are the American movies of the four or five last years of the silent era," said Hazanavicius. "When I was really deep in the sea of doubt, I watched Murnau's City Girl. I watched City Lights, Charlie Chaplin. I watched The Unknown, Tod Browning -- this is a masterpiece --- it's a short movie an hour and 10 minutes maybe, with Lon Chaney, and it's a brilliant, brilliant movie. Love it."

Hazanavicius says his favourite part of making movies has changed from film to film, but with The Artist it was the work he did in pre-production. "Nobody speaks about preparation. This is the most boring things you do. You go from a location to another one, you say, 'No, no, no' -- oh, it's like the Amy Winehouse song, 'No no no.' But this is the most important thing, really, because the choices you do here, during the preparation, that's the good or the bad choices that you're going to live with for all the movie."

Over the last 10 years of interviewing movie-makers at TIFF I've asked almost every director I've interviewed to talk about their favourite part of filmmaking, and I told Hazanavicius that I was fairly sure he was the first to ever mention preparation. "Yeah, nobody speaks about it, but I swear to God, this is the most important. Everything is important, but people are fascinated by the shooting. But shooting for me is very fun, it's like holidays in a way. It's a race, but it's a holiday... But in a way, you just work. You make the material for the editing. That's all that you make, you make the material. And the editing, that's when -- you know, you're talking about directing actors? You don't direct actors. You help them in the acting, and the editing process, in the shooting as well -- but you finish the job in the editing process. And the preparation, it's really the choice -- any preparation on any movie at a certain point the producer comes to you and says, 'We're missing money. The movie, the schedule is two weeks too long. You have to cut 10 days.' Or, 'We miss 2 million Euro, you have to find the solution.' And the way you find the solution is what you're going to cut in the movie. Will you cut the head? Will you cut an arm? Will you cut a leg?

"So you have to make choices. Or maybe you can just do something -- you cut his hair, you cut his moustache, fingernails, and nobody will see it, maybe, and it's gonna be perfect. So the choices you make in the preparation are really essential. To me, this is the key. Also, this is the most difficult, because you have to go to the office, there's not a guy behind the scene, the making-of. There's nobody. You have just small, bad coffee machines. It's not glamorous at all, it's boring. There's no journalists, no one thinks it's interesting. But this is really the foundation of your movie. Except the script, which is really important -- but the preparation, this is the period when you handicap the script. The script isn't always perfect because we could do that, we could do that, we could do that. But during the preparation, the producer says to you, 'You can do that, you cannot do that, you cannot do that and you have to find solutions.' And the way you find the solution -- this is you... The way you cut, when you have to solve problems, this is you."