It'd be fair to say that most everyone who caught either of the Fleet Foxes' sold out shows at the Vogue Theatre last week was blown away by how insanely talented the group is. It was apparent that the audience loves these guys in both the rapturous applause following the sextet's countless epochal folk rock swells and in the shushed awe during the occasional tender, a capella harmonies between lead Fox Robin Pecknold, bassist Christian Wargo and drummer Joshua Tillman. 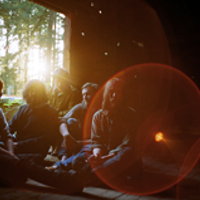 Considering the sophomore set Helplessness Blues just came out this week, Fleet Foxes is still a relatively young band, but sitting there at the Vogue I realized that some of these Seattle-based musicians, including openers The Cave Singers, have been thrilling me for over 15 years.

Interestingly, I've been following Fleet Foxes' newest member, Morgan Henderson, the longest. Way back in Dec. 1996, he came up here with his then-band nineironspitfire to play a punk show at a community hall in White Rock, and dude, much like the rest of the noisecore outfit, was beyond terrifying.

The group played in a circle in the middle of the floor, facing each other instead of the crowd as they bashed through their disjointed, polyrhythmic metal riffs. The lanky, teenaged Henderson was beyond menacing. Decked out in a skin-tight T-shirt and jeans combo, he violently kicked his military-booted hoof backwards and whipped his bass around, effectively securing his perimeter throughout the devastating set. It was a world away from the down home feel of his performance last weekend, which had him juggling between a stand-up bass, a saxophone, an acoustic guitar and some tambourines, which he shook gently with a giant grin pasted on his visage.

Other incredible acts he's passed through town with over the years include the legendary sass-core outfit The Blood Brothers, who played a number of houses, cabarets and clubs up here in the early aughties, and their somewhat mellower experimental follow up, Past Lives. They played the Commodore once.

Keyboardist Casey Wescott was a member of The Vogue, which actually featured two Blood Brothers as well. While these days he's rocking a massive organ set up and occasionally strumming a mandolin, his work with The Vogue saw him wrangling up smooth Rhodes organ licks for the group's ultra-sexed up art punk. In the summer of 2000, they came up to play the then-bustling Brickyard, though attendance that night was pretty sparse. The band was in a pinch as singer Johnny Whitney and his girlfriend, who were driving up separately, were denied at the border, so bassist Adam Miller hung up his four-string, hopped on the microphone and assaulted the crowd. Literally. Shortly after almost cracking his skull open after falling off the stage, he got back onstage and hurled a metal chair into the audience. The plug was pulled shortly thereafter. The troupe's lone album, As Brass and Satin, is essential.

The Cave Singers' guitarist Derek Fudesco is an institution. From his early '90s crust work in Area 51 and Death Wish Kids, to his time spent with the beloved, rowdy garage rockers The Murder City Devils, to the melodic indie pop of Pretty Girls Make Graves, the guy is pretty much guaranteed to pop up on any Pacific Northwest musicologist's iPod playlist.

As for the Singers' vocalist Peter Quirk, he's tamed himself from the twitchy wails he used to deliver in his old neo-new wave group Hint Hint, but his laid-back, back porch drawl in his current project is no less engaging.

With both groups currently touring together in support of their brand new albums, there's no doubt that Fleet Foxes and The Cave Singers will be sticking around for some time. If and when the acts choose to move on, however, it's almost certain that some of those guys will be back in no time with another set of stunners. I, for one, can't wait to hear what's to come.