I've always loved the bluster in the opening line of The Communist Manifesto:

Thanks to such swagger you would never guess that when he wrote his seminal work, Karl Marx was desperately poor. And not just Marx. His wife, Jenny, was also poor. Their seven children were poor. Even their servant, Helen Demuth, was poor.

Poorest of all was little Frederick, Marx's son by Helen Demuth. His three sons by his wife all died in childhood, and he desperately wanted an heir. But Helen Demuth was a servant, so he disowned Frederick and sent him off to a foster home. Class struggle, yes. Class act? Not so much.

Perhaps Marx's poverty seeped into his philosophy at an unconscious level, which would explain why everyone in China was so poor. And that's me being polite. Shopping for a canteen was like guest starring on Survivorman.

Wang and I began our odyssey at an art supply store on the edge of the Bund that seemed almost functional, except there were no tills. The clerks clipped your money to a clothesline and sent it zipping up to a tiny window like a projection booth high at the top of the back wall, then your receipt and change came zipping back down in a little bag. The change was crumpled like candy wrappers and dished out by the bushel. The clerk would just throw a handful of the right colour of bills at you without bothering to count. They were of such miniscule value it wasn't worth uncrumpling them.

But most of the places we were sent to seemed more like wholesale outlets behind battered wooden doorways of improbable height, or along beaten stone loading bays where three old men in stained wife-beaters played cards and smoked, and would listen patiently to Wang then point into the distance down a dirty stone canyon of buildings.

Then we would walk and walk, and come at last to another loading bay, where three old fellows drinking tea would shake their heads and point further through the smog.

By afternoon our long march had taken us in a great circle right back to the art store where we had started out.

The train to Chengdu was a relic from the 1930s, a gift from the East German government. The ancient pullman berths had lace curtains thick with dust and little scrimshaw engravings on the walls, and the whole carriage creaked like the Mary Celeste as we rolled past villages so rustic you could see the sun set through chinks in the walls. And yet there seemed to be no homeless anywhere. Everyone was equally poor.

After five days we reached Nanching, and when I got back from lunch there was an old man wearing one of those blue one-size-fits-none Mao jackets sitting with his feet up on my bed. He was a civil engineer working on a massive dam project near Chengdu. He smoked and smoked and said China was very old, and very poor.

That night a group of young graphic artists returning from a conference in Shanghai entered the compartment. They had seen me drawing, and wanted my opinion on their window display designs. Their portfolio was horrific, like cheap parodies of Macy's window displays circa 1970. They seemed to come from a different planet than the old engineer. Yet he, dozing and drooling on his smock, and the intensely eager 20-somethings with their bizarre documents of experimental commerce, seemed completely at ease in each others' presence.

Chungdu lies at the foot of the Tibetan plateau, but it's only 1,500 feet above sea level. I rickshawed north to the main hotel, a giant block of cement near the river. On the top floor of this bunker was a grand restaurant that looked out across a sea of lightless shanty towns like a floating electric oasis. The setup seemed bogus. Surely there would be riots if the human rickshaws down on the street tumbled to what lay above.

The restaurant was Felliniesque in its Brobdingnagitude and Pythonesque in its ineptitude. The vaulted ceilings looked like something NASA would construct. There were a hundred items on the menu, but every time I tried to order something two tiny waitresses in tartan waistcoats, proud of their diphthongs, recited a little routine they'd worked out: "I am so sorry!" "That item is not available!" and this went on for five minutes, until I realized they were trying to get rid of me.

My room had fifteen-foot ceilings and a mysterious snorebag in the other bed who never woke or even stirred. The TV had a single channel that blasted incredibad footage of Chinese opera and tore the envelope of signal-to-noise ratio.

Next morning in the lobby I saw a man in an outback hat yelling at a group of Chinese soldiers to put out their cigarettes. This was Bruce, chair of Asiatic Studies at Melbourne University, presently teaching in Beijing.

He was a liberal intellectual, except when it came to smoking, whence he became a regular Brownshirt. Every time someone lit up a smoke he would sputter in Mandarin and jab his cane at a nearby NO SMOKING sign. These signs were everywhere, and so were the smokers, so Bruce became a sort of fresh-air Canute, waving his stick and demanding his rights under the law.

The Chinese were startled. They had never thought of actually obeying the ubiquitous signage. They would squint up at them as though waking from a counter-revolutionary dream, stamp out their cigs and apologize. And watching Bruce in action I realized liberalism, like communism, would never work.

After we stowed our gear at the Snowlands Hotel, Bruce and I walked down to the river, where we sat on massive stone steps gasping for breath and watched five Tibetan women with apple-red cheeks and photos of the Dalai Lama sticking in their hat brims stamp the dirt out of heavy purple quilts with their feet.

The river was yellow with sediment. The sky above was a deep, dark blue, and seemed to suck away into an indigo tunnel overhead. The air was so thin you could see the planets during the day. I heard there were oxygen bottles in the better hotel rooms.

My first day on the plateau was pretty shaky, especially after I got hammered on chang, a beer made from millet. Three days later I got hold of a bicycle and rode out to Drepung. Once the largest monastery in the world, home to 10,000 monks, it had been razed during the Chinese invasion and now looked like the set of a Tarkovsky film, a hillside of sacred rubble and roofless stone buildings with yaks that weighed around a ton, cropping carpets of green grass inside and out, and half-burned sutra manuscripts stuffed into cracks everywhere.

I sat and drew for an hour, and a monk sat down to watch. He couldn't believe I had no camera. Tibetans were already suspicious of cameras. Because of the manner in which a photograph freezes time, they worried that some part of a person's soul might somehow be connected to the fate of his photo, the way disparate photons are inexplicably connected in the New Physics. Tourists were still sparse, but already a photo of a local had made it back to Lhasa inside an old National Geographic magazine that had ended up in a latrine as butt-wipe. Bad juju.

Drawing captures the soul in a wholly different way from photography, although the two processes were once almost identical. The very first man to be photographed was an unknown Parisian who stopped on the corner of le Boulevard du Temple one morning to get his shoes shined, and stood so still that he showed up on the slowly exposing plate of one of Daguerre's first cityscape: 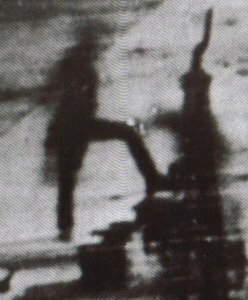 Drawing still works this way. Rather than freezing time it slows the flow until elements emerge that one might never notice in the few moments it takes to frame a modern shot. The monk seemed to enjoy the speed I was moving at. He invited me in for tea.

We talked all afternoon, although we hardly said anything. He asked if I thought the Dalai Lama would return to Tibet. I said, "Probably not, the guy's a bum, he owes me 10 dollars." The monk laughed with delight. He said he thought, yes, certainly, the Ocean of Wisdom would return. But when? That, he did not know.

After tea we walked up the steps to the philosophy department, which was a walled garden with a grove of trees. The monks sat in daisy chains on the grass asking questions while one of them stood in the centre shouting out answers. If he got in a good one the others would laugh, and the monk would smack his hand, zing!

It looked more like standup than philosophy. I thought, Who could shoot these wild and crazy guys? Smash their heads in with rifle butts? The soul boggles.

The Snowlands Hotel was an ancient two-storey affair, bare stone rooms and hard wooden beds with thick dusty quilts too heavy to sleep under. No running water, just a well in the courtyard with a beautiful old wrought iron pump.

One morning I awoke from a dream about a gigantic steam train that came thundering down the main street in Lhasa. Later I found out there had been an earthquake at dawn, one of three omens for the trouble that was about to unfold.

I tried to get back to sleep but a terrible scream came from the courtyard, a clanking mechanical shriek. Two beefy tourists were trying to draw water, but they'd never heard of priming the pump. Convinced it was simply a matter of elbow grease, they were wailing on the weathered wooden handle of the apparatus as if they were trying to ring a bell at the top.

By the time I got downstairs they had aged the thing 50 years. It was depressing, because I knew I was causing the same kind of damage just being in Tibet, but I couldn't see my own stupidity clearly enough to do anything about it.