On Friday, Moira Wyton alerted Tyee readers to the likelihood of a new COVID wave hitting B.C. as early as next month, with estimated daily case counts as high as 1,500 by the end of April.

The last two months in South Korea suggest we may be hit much harder than that.

Equally shocking is the speed with which South Korea reached these numbers.

A look at the country’s seven-day rolling averages for confirmed daily cases through the first months of the year shows a frighteningly rapid spread of a disease the people in South Korea thought they had under control.

In effect, South Korea had crammed four-fifths of its pandemic cases into four short weeks.

What was going on? Korean media like Yonhap News Agency delivered the numbers every day, but explained little or nothing. Not until March 17 did the media begin to analyze the country’s spiking COVID cases.

The Korea Times, an English-language paper, said the numbers were largely due to the country’s “aggressive testing using rapid antigen tests conducted by medical personnel at clinics” as well as PCR tests done at screening centres. As Donald Trump used to say, if you don’t test, you don’t find cases.

The highly infectious new Omicron sub-variant BA.2 was a factor in the spike. But South Korean health officials had also relaxed public health measures like quarantines, as well as increasing the size of private gatherings from six to eight in recent weeks, the paper said. That was partly due to an impending presidential election.

The paper quoted a professor of preventive medicine: “It seemed like they were trying to appeal to the voters, who were tired of the social distancing measures, by giving them more freedom.”

Another medical expert cited population density: half of the country’s 52 million people live in the Seoul metropolitan area. And authorities had been too reliant on South Korea’s high vaccination rate (87 per cent of South Korea’s population is fully vaccinated, compared to Canada’s 82 per cent).

“Vaccines are not a panacea against Omicron,” said Dr. Chon Eun-mi of Ewha Women’s University Mokdong Hospital in the report. “They may prevent patients from falling into critical condition, but the vaccines developed to this date have proven to have little effect in preventing Omicron infections.”

Cases rising around the world

South Korea is not the only country facing another COVID wave. Hospitalizations in the U.K. are as high as they were in January 2021, and in some areas have doubled in two weeks.

Meanwhile Germany recorded almost five million cases in the 28 days before March 17, and Vietnam 4.2 million, according to Johns Hopkins COVID-19 dashboard. Hong Kong has recently seen 631,130 cases and 4,620 deaths — after almost escaping the pandemic in its first years.

Even China, despite its draconian lockdowns and “COVID zero” policy, has reported about 650,000 cases between mid-February and mid-March, out of a total case count of just 786,000.

Despite soaring case counts, people in many countries seem to have made a separate peace with COVID, silently accepting the harm it continues to inflict. Germany’s new chancellor Olaf Scholz has said, “We are entering a new phase of the pandemic, in which we, like nearly all our neighbouring countries, will be getting rid of nearly all protective measures.”

As for the U.S., Dr. Eric Topol recently noted that “Once again, America is in denial about signs of a fresh COVID wave.”

“Not only is there a gaping hole in our immunity wall,” Topol wrote, “but the $58 billion budget of the American Pandemic Prepared Plan, advanced by the White House to comprehensively address the deficiencies, was gutted by the Senate and reduced to just $2 billion. Under threat are the order of more than 9.2 million Paxlovid pills, the Test-to Treat program announced at the State of the Union address, better data, wastewater surveillance, efforts to develop a pan-Coronavirus vaccine, research on long COVID, and many other critical public health measures.”

He concluded: “We learned in 2019 that what happens in China doesn’t stay in China.”

In Canada, we’re also dangerously relaxed. Incoming vaccinated travellers who arrive on April 1 or later won’t have to take a pre-entry COVID test.

Ontario’s COVID-19 science table predicts an uptick in hospitalizations but not a major increase in cases. Alberta has moved to the second phase of its three-step strategy to lift public health measures, dropping limits on indoor and outdoor gatherings, capacity on large venues and entertainment sites, and most mask mandates.

Here in B.C., cruise ships will be back in April, and ships must have plans for dealing with the inevitable COVID outbreaks. In effect, COVID will be just another hazard of cruising, like norovirus and bad weather.

We’ve dropped a number of public health restrictions, notably the mask mandate. In effect, Dr. Bonnie Henry and the NDP provincial government have left it up to us to mask and distance ourselves.

But only if we’re in the mood.

Living in the moment, not looking ahead

So we are entering spring with far more travellers coming into the province from overseas, and with far less screening; we never did do much testing or contact tracing, so we don’t even have a good estimate of what our real case and death counts might be. The medical journal The Lancet recently estimated the true mortality of the pandemic so far at 18.2 million. So we may have lost as many as 9,000 British Columbians, not 3,000.

Like the U.S., our federal and provincial governments go through a panic-neglect cycle. They panic and impose “restrictions,” not “protections.” Everyone feels oppressed and hard done by, and wants to go back to normal. Then when the numbers start to fall, governments switch to neglect and let us pretend everything is indeed normal again — until the numbers start to rise once more.

The B.C. government seems to have decided that this is a good time to be neglectful. As long as our overworked and understaffed health-care services aren’t totally swamped, the government doesn’t care if we get sick. So we can be free to get up close and personal with friends and strangers alike. Old folks and the immunocompromised are equally free to stay home and not make a fuss. And everyone is free to make a fuss by driving around in big trucks. 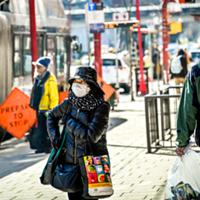 The Case for Masking

But the B.C. government is living in the moment and not looking ahead. Someone could arrive tomorrow from Germany, South Korea or Hong Kong — or Kyiv, Moscow or London — and spread a whole new wave of COVID-19. That would bring down many of our hospitals, force workers to stay home or spread the virus to their fellow workers and customers, and implode the barely re-inflated economy.

If B.C. sees a similar increase in the next two months, our present rolling daily average of 225 cases would hit 19,575 by May 16. Of course it won’t really, because we don’t track cases as well as they do in South Korea. But the true case count could be in that range.

The B.C. government, like most governments, would have to flip from neglect to panic yet again. But this time we can hope that Adrian Dix and Bonnie Henry will finally realize that panic gets them nowhere, and neglect is even worse. 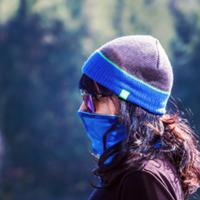 Why the Pandemic Will Be a Long, Long Haul

They need to protect everyone, all the time — toddlers, elders, the immunocompromised and everyone else. They need to tell us the facts, not sing us lullabies. And they need to decide how to minimize COVID cases so they can also minimize long COVID.

If not, they will have to deal with thousands more British Columbians who’ve become long haulers. One recent study found that up to 70 per cent of them may have impaired memory and focus.

Instead of helping to build a better post-pandemic B.C., they will be an ongoing problem. If we treat them as casually as we’ve treated COVID itself, they will be a problem we never solve.

Health officials in South Korea will soon recognize how their recent spike of COVID cases will leave them with a national case of long COVID.

We may just be able to escape their fate — if we heed their warning.