Surprise! Vancouver city council’s attempt to limit this year’s increase in policing costs has been overruled by the province’s director of police services, who has ordered the city to fork over an additional $5.7 million.

Actually, no surprise. The director is Wayne Rideout, a former career police officer, mostly with the RCMP, until he was appointed to the job by cabinet last year.

Rideout’s decision highlights the impossibility of police reform in the province as long as local elected representatives have no ability to provide meaningful direction and budget decisions are ultimately made by one unaccountable provincial manager.

Rideout’s ruling comes a year after a conflict between the city’s police board and council.

In December 2020, Vancouver council passed a budget that froze police spending for the next fiscal year at $340 million — 21 per cent of city spending and about $350 per household. COVID-19 had brought financial uncertainty, council said, and spending needed to be closely watched.

But the police board wanted a $5.7-million increase, about 1.7 per cent.

The Police Act says non-elected police boards don’t have to accept budget decisions by city councils. They can appeal them to the provincial director of police services — Rideout — who rules on what projects taxpayers must fund, how many new officers departments can hire and policing priorities.

That’s what Vancouver’s police board did. And Rideout has now ordered the city to come up with the extra money.

Bad news for taxpayers, but worse news for anyone who thinks police reform is important to increase public safety while directing resources to more effective ways of dealing with the issues that affect communities, from mental health to substance use.

Because under B.C.’s current Police Act, change is almost impossible.

The act says police boards, not councils, oversee municipal police forces. (There are 11 municipal departments in the province, with other communities policed by the even-less-accountable RCMP.)

The police boards can have up to nine members. The mayor is chair, and can only vote to break a tie. Council can name one member. And the rest are appointed by the province.

The boards — with no public accountability — hire and fire the police chief, sets priorities and the police budget. The board can consider council’s priorities or community concerns. But it makes the decisions.

And if there’s a conflict, the director of police services rules.

Rideout’s decision to impose the funding increase is hardly surprising given his background and the Police Act.

His background is in policing, including major crime investigations. He played a major role in the investigation of Robert Dziekanski’s death at Vancouver International Airport, and made the decision not to correct initial misinformation minimizing RCMP officers’ actions. Rideout was also involved in the RCMP’s botched terror investigation of John Nuttall and Amanda Korody, who were released after three years in jail when the BC Supreme Court found the RCMP “manufactured the crime.”

It’s to be expected that a career police officer would tend to favour the needs of departments for more — more money, more employees, more equipment.

But Rideout’s perspective is naturally limited. He hasn’t worked in municipal government and can’t understand competing budget pressures in the same way city councillors should. His expertise isn’t in social policy or mental health or substance use. He’s not accountable to citizens. (Rideout hired two consultants to help with the review. One, Peter Lepine, was also a senior RCMP officer.)

There is a saying that “if all you have is a hammer, everything looks like a nail.” In this case, Rideout — like his predecessors — has a perspective shaped by years of seeing more money for police as a way to improve safety.

The real problem is B.C.’s bizarre Police Act, which has provides no meaningful role for locally elected representatives in setting priorities and budgets.

The ostensible aim is to prevent politicians from abusing their power by interfering in police operations — blocking corruption investigations, for example. 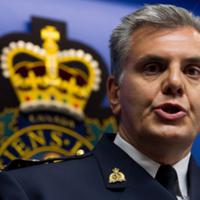 A Former Mountie Will Set the Police Budget for Vancouver. That’s Wrong

But other jurisdictions have struck a better balance. Ontario gives city councils in larger municipalities the ability to appoint a majority of police board members. Disputes between police boards and councils go to the Ontario Civilian Police Commission, an independent tribunal. The system is not perfect, as the turmoil on Ottawa’s police board has shown, but it’s far more democratic than B.C.’s approach.

In Alberta, councils appoint all police board members to city councils. And its police commissions send policing plans and budget information to councils, where the elected representatives make the decisions.

There is a chance of change in B.C. An all-party committee of MLAs has been reviewing the Police Act and will deliver recommendations for change.

But meanwhile, Vancouver residents could see their taxes rise to cover the increased spending ordered by the provincial government.

More importantly, the decision again shows urgently needed accountability and reform in policing is impossible under the current system.