"If your freedom is built on the denial of freedom to others, then you didn't actually have freedom at all. You had privilege." — Chief Derek Nepinak, Pine Creek First Nation

This follows three weeks and counting of protests, occupations, blockades of highway and bridge infrastructure across the country, insurrectionist demands to remove an elected government, discovery of armaments and general disruption to residential communities across Canada and to supply chains.

Most provincial governments have been equally inept in monitoring or responding to the varied white supremacist, misogynist, anti-government and anti-vaccine antics of a self-styled “freedom” movement supported by an unhealthy amount of American money and far-right, far-white political rhetoric.

Many Canadians are cheering Trudeau’s move to get control of the matter or, in his words, to reinforce “the principles, values and institutions that keep all Canadians free.” The Emergencies Act invocation may improve Canadians’ opinion of the government’s otherwise anemic performance on this matter.

But as the federal government talks the talk about law and order, we should pause and reflect on the walk of this and other governments as it pertains to the constitutional principle of “peace, order and good government.”

For those who have the privilege of claiming “freedom” in this country, the government, cops and army are generally viewed as benevolent in their impulses, helpful in their interventions, and dedicated to the social stability of communities and protection of the rights of Canadians.

For Indigenous people, political, police and military institutions are rarely benign or contributors to our well-being. “Law and order” are used against Indigenous people, not in support of our rights and freedoms; not in recognition of our collective and individual trauma and immiseration produced by the state, nor to guarantee our personal security.

Consider the Canadian legal system’s failure to provide justice for the death of Colten Boushie, shot in the back of the head by a white farmer who claimed an exceedingly rare “hangfire” had produced the fatal injury, while he “defended” his farmyard from the presence of Indigenous youth.

Years later, the Civilian Review and Complaints Commission would find that the RCMP discriminated against members of Boushie’s family, mishandled witnesses and evidence and issued early media releases that implied Boushie’s participation in criminal activity. This, despite the commission’s findings that there was no evidence Boushie had participated in any property offences on the Stanley farm.

Indigenous people have a different understanding of “law and order” that comes from our collective experience.

Canada has a long and ongoing history of Indigenous oppression by the use of state force. The imposition of reserves. The dispersal of the Métis. The relocation and marginalization of Inuit. The genocidal implementation of the residential school policy. The imposition of the assimilationist Indian Act which still operates in problematic ways, controlling “Indians” on “Indian reserves.” The '60s Scoop and contemporary child welfare debacle which destroys Indigenous families. And the perpetual assault by corporate Canada on Indigenous traditional territories, enabled by government policy and the use of state force. This has notably been executed in the past couple of years in favour of logging companies (Fairy Creek), white commercial fishers (Sipekne'katik Mikmaw Nation), gas export (Wet’suwet’en Nation), hydro dams (Site C) and so on.

This account doesn’t even begin to take up the incidents of the failure of governments and police to protect individual Indigenous people’s rights, freedoms, lives and basic personal security. Think of the Missing and Murdered Indigenous Women — another genocide, of which the Pickton murders and the Highway of Tears are a part; of the mysteriously dead Indigenous students in Thunder Bay; of Joyce Echaquan, Brian Sinclair and countless others who suffered or died in the health “care” system; and of the numbers of Indigenous men and women incarcerated in shockingly disproportionate numbers.

At least some of us still remember the 1990 Oka Crisis, when then-Quebec premier Robert Bourassa called the army in to engage Kanesetake land protectors and assert Quebec jurisdiction over the disputed territory known as The Pines. In the process, Mohawk people were trapped in their community by bands of hostile white folks looking to build a golf course on their territory, while the land protectors — objecting to the appropriation that included a Mohawk burial ground — were subjected to police and then military assault and intimidation. 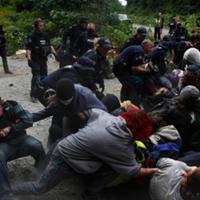 In 1995, a dispute over Secwepemc territory led to 400 RCMP with helicopters and armoured personnel carriers engaging a handful of Indigenous occupiers at Gustafsen Lake. In 2006, activists from the Mohawks of the Six Nations of the Grand River occupied a disputed piece of land in Caledonia, resulting in a violent Ontario Provincial Police engagement and a still unresolved land dispute. In 2021, Wet’suwet’en land defenders blocked Coastal GasLink pipeline work through their traditional territory, a matter that is ongoing and has been an object of RCMP attention and punitive action. We could go on.

For us, the contrast in experience always boils down to Canada’s land theft. The state and the cops are able to move fast enough when they have corporate interests to protect from those who are always least likely to be protected. Historically and now, public governments act to protect settler interests — corporate and otherwise — and to insulate the state’s claim to our territories and against our sovereignties.

Indigenous people everywhere are shaking their heads. If only we got that kind of support and concern when challenging the many forms of injustice that Canadian freedom is built upon. The indulgence given to these “truckers” to date is a far cry from official and popular responses to our public critiques and protests.

As Canada contemplates the population of the “freedom convoy” and its claims of oppression, spare a thought for the many forms of unfreedom that Indigenous people live with. Then, consider supporting justice movements here on Indigenous territory against the corporate and government violence to our lands and our people.