Recently, starkly contrasting news images have been circulating of two significant conflicts in Canada. One is the ongoing land defence against forestry companies in Fairy Creek, B.C. Those protests have been met with extensive police repression. The others are a series of anti-vax protests across Canada. Conversely, they look like they’ve been met with laissez-faire police responses.

While the contexts are significantly different, with many diverse factors, the contrast in police responses says much about the way certain types of protesters are treated and viewed in Canada.

Surveillance practices have much to do with this.

Surveillance is the collection of information for future ends. Information gathered structures how future police operations unfold. Some have defined surveillance as the “systematic focus on personal information with the intention to influence, manage, entitle or control those whose information is collected.”

In recent years, Indigenous land defenders have lived under increasing police and state surveillance while far-right, conspiratorial movements have not. Police have a long history of surveilling social movements in Canada, especially leftist, Indigenous, queer, Black, feminist and other marginalized groups.

Information collected by state and police is central in producing a picture of the people they are trying to control or influence. It shapes how the subjects of surveillance are understood, characterized and then intervened upon.

Police surveillance invariably constructs an image of deviance and criminality, characterizing the subjects of surveillance as threats to public order and civic values. For example, police have characterized Indigenous land defenders as “extremists” and have used national security resources to amplify and distort land claims conflicts as security threats.

Constructing groups or individuals as criminal or security threats creates a negative cycle, reproducing a need for further surveillance and police intervention.

Over the past 20 years, protest policing tools have experienced a significant professionalization and standardization that rely on surveillance for pre-emptive interventions. Some scholars have named this police-management approach as strategic incapacitation.

Surveillance is at the core of this approach which aims to suppress social movements: it enables the targeting of particular, prominent and outspoken organizers; it facilitates intelligence collection on groups and movements to produce counter-messaging; and it gathers the knowledge of planned protest activities to control strategic geographic access points.

Without surveillance, the control of protests and protest space becomes much more reactive and far less organized. This is the precise imagery witnessed in the policing of anti-vax conflicts.

Fairy Creek, on the other hand, has been structured by a history of surveillance of land defenders and Indigenous groups and, because of the pre-existing knowledge and categories produced by police surveillance, has been the site of a far more violent policing response.

Not only does pre-emptive surveillance provide the tangible, practical tools to engage in tactics of strategic incapacitation, it also shapes the identities of both the land defenders and the police through pre-existing categories and stereotypes. Surveillance is a key mechanism by which these categories and belief systems have been produced and these organizational histories inform and prefigure contemporary practices.

This broader factor can help explain the zeal and excessive force enacted by police at Fairy Creek: land defenders were not only characterized as criminal but also represented a symbolic threat to Canadian identity. Indeed, the conflict is highly representative of settler-colonial policing where the police are not only a vehicle for “law and order” but also a frontline in the defence of society’s values.

This dynamic was particularly apparent with the appearance of “thin blue line” patches on RCMP uniforms at Fairy Creek. The patches depict a grey and white Canadian flag with a blue horizontal line through it. Despite having unequivocally racist and colonial meanings, and despite a management directive against wearing them, the RCMP police union has supported officers sporting the patches.

Notably, the appearance of the patches played a role in the B.C. Supreme Court’s decision to end their injunction that blocked people from protesting against logging companies. The decision, although since appealed with a temporary injunction put back in its place, was a rare rebuke of police misconduct. It will, however, likely do very little to change the organizational practices that produced the police response at Fairy Creek.

If the police feel they have the right and duty to protect notions of Canada’s “social values” in the forests of Pacheedaht territory, there are significant — potentially unsurpassable — organizational practices that shape, enculture and grow a deeply colonial belief system sustaining these police operations.

One cannot change an organization’s culture or everyday practical circumstances without reckoning with its embedded cultures and histories. Police organizations have a terrible track record with the kind of critical self-reflection that would be a first step at correcting this legacy. 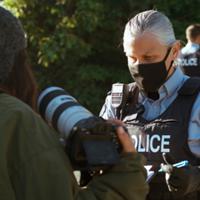 The solution should not necessarily be more policing of these groups. Like other social problems, more policing will do little to address the far-right or anti-vax conspiracy grievances.