Besieged on three sides by a Russian military buildup, the Ukrainian government has pleaded with western countries for military aid to help confront what might be the largest land invasion in Europe since the Second World War. Following a three-day cabinet retreat, Prime Minister Justin Trudeau declined to provide even pistols to Kyiv, apparently for fear of escalating a volatile situation.

If only the Ukraine were Saudi Arabia, such moralistic hesitation on arms exports might not be so problematic. In 2020, sales of Canadian military equipment exported to the Ukraine totalled $351,964 — about half the value of a cheap condo in the Lower Mainland. That same year Saudi Arabia — a country with one of the worst human rights records on the planet and a primary player in the wretched civil war in Yemen — enjoyed over $1.3 billion in Canadian arm exports. In 2019, Canadian arms sales to the same Saudi regime that butchered Jamal Khashoggi in their Istanbul consulate reached almost $3 billion.

A scathing report in 2021 by Amnesty International Canada and Project Ploughshares documented how Canada may be violating international law by providing lethal weapons almost certainly being used in the world’s worst humanitarian crisis. Photographs of Canadian-made light armoured vehicles and sniper rifles in Yemen were blandly dismissed by the Department of National Defence as “battlefield losses,” rather than obvious evidence that Canadian arms are being deployed in one of the world’s worst war zones in explicit violation of written assurances to the contrary provided by the Saudis.

Canada’s indulgent support of the Saudi regime ramped up in 2014 with a $14.8 billion deal to provide 928 armoured vehicles configured for carrying troops, for “heavy assault” armed with a 105 millimetre cannon, or for “direct fire support” with a 30 millimetre chain gun.

The Saudis also ensured that details of the sales be sealed under a confidentiality agreement, which also benefited Canadian politicians seeking to duck moral responsibility for a deal so at odds with professed Canadian values. Former prime minister Stephen Harper described these lethal weapons as “trucks.” Trudeau characterized them as “jeeps” — a ruse eventually revealed when the media obtained documents showing how grotesquely inaccurate this description was.

Other Saudi arms exports from Canada included 58,506 rifles, including large caliber sniper rifles lethally effective to two kilometres. Canadian aerospace companies have been providing maintenance and training support to the air forces of Saudi Arabia and the United Arab Emirates whose bombing campaigns in Yemen have left 24 million people at risk of starvation.

Canada was one of only four countries flagged by the UN Human Rights Council’s panel on Yemen as “helping to perpetuate the conflict” through ongoing arms sales. Global Affairs Canada responded to such criticism with the absurd position that “Canadian exports of military goods and technology to [the kingdom] contribute to regional peace and security.”

Such moral origami aside, lucrative sales by Canadian arms manufacturers located in several federal swing ridings are unlikely to end anytime soon. The Saudis have a secretive 14-year arms deal benefiting over 500 Canadian companies extending to 2028. The four million Yemeni refugees — mostly women and children — do not vote in Canadian elections, nor are they represented by well-heeled industry lobbyists. The continued cynical political calculus seems inevitable.

In light of our wretched record regarding Yemen, for Canada to maintain that is does not wish to enflame the volatile situation in the Ukraine is hypocrisy taken to the level of performance art. In lieu of actual military aid, the prime ministers office’s communications department apparently instructed cabinet ministers to pose with pieces of paper professing their steadfast support for the Ukrainian people. Such vacuous virtue signalling has sadly become emblematic of the Trudeau government on everything from the climate crisis to Indigenous reconciliation.

In a written statement, the Ukrainian embassy in Ottawa expressed their understated disgust regarding Canada’s lack of concrete measures to help meet this crisis. “We have hundreds of Russian tanks and armoured vehicles deployed along the Ukrainian border and in the occupied parts of Ukraine’s territory. Facing the risk of a further Russian invasion, we need to defend our land. The U.K. and the U.S. have already shipped the military equipment and we would appreciate if Canada follows suit.” 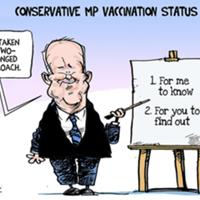 How to Destroy the Conservative Brand

War is of course the worst of all possible outcomes. However, those professing this laudable view should also not presume that Russian President Vladimir Putin shares their sentiment. Domestic critics of the Putin regime often find themselves thrown out of windows, poisoned by nerve agents, or shot in broad daylight outside of the Kremlin. Thirty-one journalists — and counting — have been murdered in Russia since he came to power in 1999.

Like it or not, Canada is a major arms producer. Many Canadians — myself included — might not enjoy that reality but it is the truth. At this pivotal moment, it is worth asking why such an outsized portion of these lethal exports are somehow bound for the benefit of one of the most murderous regimes in the world, rather than a besieged strategic ally standing up to geopolitical forces fundamentally opposed to the principles of democracy. Canada can and should do better. As always, history will judge us accordingly.