The government of Canada announced it had reached agreements-in-principle this week to compensate First Nations victims of its discriminatory child welfare system and to fund long-term reform of both the First Nations Child and Family Services and Jordan’s Principle — a legal rule aiming to ensure equitable access to public services for First Nations children.

The agreements-in-principle were reached following nearly two months of negotiations between the First Nations Child and Family Caring Society, the Assembly of First Nations, the Chiefs of Ontario, the Nishnawbe Aski Nation and counsels for two class action cases — Xavier Moushoom and Zach Trout.

As a researcher in public interest litigation and human rights, and one of the lawyers who represented the First Nations Child and Family Caring Society in its human rights case — which led to a historic victory in 2016 before the Canadian Human Rights Tribunal and affirmed the right to equality for more than 165,000 First Nations children — here’s what you need to know about the agreements.

What’s in the agreements?

The agreements represent a commitment of the concerned parties to work together to agree on the details to compensate First Nations children and their caregivers who were harmed by Canada’s discriminatory conduct. They also include a commitment to develop and put in place long-term reforms to end ongoing racial discrimination.

One agreement includes $20 billion in compensation for First Nations children on-reserve and in the Yukon who were removed from their homes by child and family services agencies between April 1, 1991 and March 31, 2022.

It includes compensation for those who were impacted by the government’s narrow definition of Jordan’s Principle between Dec. 12, 2007 and Nov. 2, 2017, and for children who did not receive or were delayed receiving an essential public service or product between April 1, 1991 and Dec. 11, 2007.

The other agreement includes approximately $20 billion for long-term reform of the First Nations Child and Family Services program. These reforms include additional resources to develop and implement prevention initiatives that will help children and families stay together and could be implemented as early as April of this year.

Legal basis for the agreements-in-principle

In particular, the tribunal found that Canada’s funding and provision of welfare services create incentives for taking children into state care, and perpetuate disadvantages historically suffered by First Nations peoples in Canada.

The tribunal also found that Canada was applying Jordan’s Principle too narrowly and in a manner that caused First Nations children to be denied equitable public services. Shockingly, Canada chose not to comply with the legally binding decision, and the tribunal was required to issue more than a dozen non-compliance orders that detailed the precise measures the government must take to reduce the harmful impacts of discrimination against First Nations children and their families.

In one of the non-compliance orders, the tribunal described Canada’s discrimination against First Nations children as a “worst-case scenario” under the CHRA and found its conduct to be wilful and reckless.

The Federal Court of Canada agreed with the tribunal and found its conclusions to be reasonable. In dismissing Canada’s judicial reviews, the Federal Court also urged Canada to act now to remedy this unprecedented discrimination in order to fix its damaged relationships with Indigenous peoples in Canada.

Why compensation and long-term reform are key

While no amount of money can remedy the harm suffered by First Nations children as a result of Canada’s discrimination, compensation is an essential element to recognizing the human rights violations they have experienced.

As emphasized by the UN Special Rapporteur on the promotion of truth, justice, reparation and guarantees of non-recurrence, compensation allows “victims to gain trust in the state, to be acknowledged as rights holders, and, potentially, to be empowered.”

The compensation is also important for the government of Canada — the perpetrator — because it demonstrates that it understands its conduct was wrong. The compensation helps promote accountability.

Most importantly, the long-term reform of child welfare services for First Nations children and the implementation of Jordan’s Principle is required to put an end to Canada’s ongoing discrimination.

As affirmed to Marie Wilson (one of the three commissioners for the Truth and Reconciliation Commission of Canada) during the course of litigation, the harms experienced by children today when removed from their families, homes and communities are comparable to the experiences of those who attended residential schools.

All of this is necessary to ensure that no other generation of First Nations children will be harmed by Canada’s discriminatory conduct.

What still needs to be done? 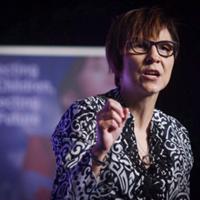 As emphasized by Cindy Blackstock, executive director of First Nations Child and Family Caring Society, the agreements are for now non-binding, and important discussions still need to occur in 2022. Success must be measured by the actual impact on the lives of First Nations children.

While the agreements were reached in response to a 15-year legal battle against Canada, these legal victories would not have been possible without the support of Canadians. After the graves of children who died in Indian Residential Schools were found, countless Canadians stood in solidarity with Indigenous communities and demanded the government not repeat mistakes of the past.

This year, public support will be needed more than ever to ensure that the spirit of the agreement is respected and translated into meaningful change for First Nations children. As stated by a survivor of Canada’s discriminatory child welfare system, there will be a brighter future for First Nations children if the injustices they experienced will no longer be ignored and their stories are heard.