Jason Kenney actually had some good news to impart yesterday — that the rollout of Pfizer’s pediatric COVID-19 vaccine will commence in Alberta on Friday.

Instead, Alberta’s premier spent most of his time at the microphone at an afternoon news conference about the vaccine delivering an unhinged diatribe about environmentalist David Suzuki, whom Kenney continues to falsely portray as advocating violence against pipelines.

You’d think Alberta’s premier would have wanted to emphasize news that will come as a huge relief to vast numbers of the province’s parents, whose kids aged 5 to 11 can be vaccinated now that Health Canada has approved the pediatric vaccine and the federal government and manufacturer Pfizer-BioNTech have cut a deal to accelerate delivery of 2.9 million children’s doses to Canada.

Parents can start to make appointments for their kids today, the Alberta government’s news release said. Vaccinations will be provided at more than 100 locations across the province.

Sure, not everyone was happy about the United Conservative Party government’s timid reluctance to require parents to show vaccine passports for their children under 12. And there was criticism of Kenney’s mealy-mouthed insistence that “we want parents to take the time they need to assess their situation, review the data, and make the best choice for their kids and their family.” (On Facebook, presumably.)

“And that’s why children aged 5 to 11 will not be subject to the restrictions exemption program,” he said.

Still, half a loaf is better than none, and for a politician in trouble in the polls who had just overcome a challenge, easily routed though it may have been at his party’s annual general meeting last weekend, you’d have thought he would have been ready to take credit for this positive development.

Instead, he left dealing with the topic of the day’s news conference mostly to Health Minister Jason Copping. Because, obviously, Suzuki has now taken up semi-permanent residence in Kenney’s head.

The premier had a rant ready in the event a reporter asked about the environmentalist’s warning in Victoria last Saturday that if police and pipeliners continue to steamroll over opposition to their projects on First Nations land in B.C., there is potential for violence.

Responding to a question from the CBC’s Colleen Underwood, the premier portrayed Suzuki’s warning as “implicit or winking incitement to violence.”

“I think it creates a context that some people could use to rationalize violence, and that’s why it’s so dangerous,” he said later in response to a similar question by Calgary Sun political columnist Rick Bell.

Spinning controversial 2013 remarks by Suzuki about Canadian immigration to give them a racist tinge, Kenney complained that if Don Cherry had said the same thing on Coach’s Corner, “he would have been cancelled by the CBC in a New York minute.” 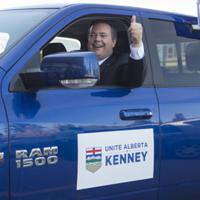 “And it is sad to see so many of the Laurentian Elites, and others, CBC and others, rush to the defence of this guy, like he’s some kind of a saint,” Mr. Kenney continued his jeremiad. “He’s infallible. He cannot possibly be criticized, even though he has a track record of saying things that would result in any mere mortal going down the cancel culture black hole of history!”

Apparently triggered by Suzuki’s 2016 remark about Stephen Harper that “people like the former prime minister of Canada should be thrown in jail for wilful blindness” about climate change, Kenney could barely contain himself.

“That’s not how we solve problems in Canada,” he huffed — apparently forgetting his own praise for Russia’s jailing of Greenpeace protesters in 2019. “We resolve our differences peacefully and democratically, not by threatening to throw our opponents in jail!”

He was angry at the Alberta Teachers' Association for inviting Suzuki to speak to a meeting.

Clearly, if one wishes to get Kenney wound up, one needs only utter the word Suzuki.

Note: The unhinged quality of Kenney’s hyperbolic stream of consciousness is difficult to summarize and portray. I recommend that if readers have time, they watch the second half of the Government of Alberta’s recording of the news conference. I have prepared a transcript of much of Kenney’s rambling answers about Suzuki. His response to Bell, in particular, is evocative.