Having spent a few days dealing with family business in British Columbia, the first reminder of what passes for reality back home in Alberta came as I awaited my delayed return flight at Victoria’s scenic Saanich Peninsula aerodrome via a message in my inbox. It said Alberta Health Services has closed nine inpatient surgery beds in St. Albert’s community hospital.

Oddly, from what else I’ve been seeing while I wait, Alberta’s premier and other government officials appear to have very little to say about those bed closings in St. Albert, where the hospital has 26 staff vacancies it can’t fill.

Indeed, Kenney would rather talk about… pickup trucks!

Kenney, or whoever writes his tweets for him, seems to think an article in the Globe and Mail complaining that Toronto poseurs with no need to drive the latest generation of the Exxon Valdez on wheels was somehow an attack on Alberta.

I suppose he could have asked Steve Allan to look into that as part of his inquiry into anti-Alberta energy campaigns once he had checked to see whatever became of those Russians who back in 2019 were supposedly trying to sabotage Alberta’s ethical bitumen mining industry.

But that might have delayed the overdue, over-budget, report on the anti-Alberta energy campaigns (or anti-energy Alberta campaigns, or whatever) even more.

One might have thought Kenney would have liked the article. After all, it was written by a Globe editorialist with impeccable conservative credentials. Moreover, it seems to suggest that only real, manly Alberta men who have an actual justification to own a gargantuan F-150 are qualified to drive the things.

But apparently whoever the Oakville Kid had looking for distractions from the hospital bed closings and the looming fourth wave of COVID-19, Stampede Edition — Hey, Delta Dawn, what’s that face mask you’ve got on? — didn’t have time to actually read the article very carefully.

Mind you, when I peeked at Twitter a couple of days ago — when presumably the premier and his fellow cabinet members were being briefed about the latest bed closings at Alberta health-care facilities and contemplating how to release the bad news — he wanted to talk about… pepper spray.

Got a problem with neo-Nazi goons attacking citizens they have taken an irrational dislike to? Beg Ottawa to equip the victims with pepper spray — or, as presumably Kenney and his supporters actually have in mind — itty-bitty little pistols.

It seems like starting an arms race with guys who are already gunned up to the gills is a plan best left to the professionals.

As Kenney certainly knows, it isn’t an idea likely to have happy results in the unlikely event it gets implemented. But since said implementation is so unlikely, it gives him an opportunity to yell pointlessly at Prime Minister Justin Trudeau and to keep our minds off the COVID case count and the latest bed closings. 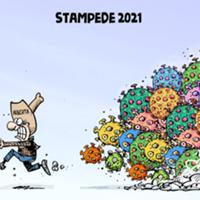 ‘The Wheels Are Falling Off the Clown Car’

With any luck, Alberta voters may be so aroused by the possibility of getting to carry a prohibited weapon — is that a can of pepper spray in your pocket, or are you just happy to be in Wild Rose Country? — or force an annoying smart car off the highway with their Dodge Ram, that they may forget about the nurses protesting the bed closings on Kenney’s proposed pay rollbacks outside St. Albert’s hospital.

If you’re a Kenney Conservative, you’ve sure got to hate the way those health-care heroes were queuing up for selfies with NDP Leader Rachel Notley, who showed up at Sturgeon Hospital to say, “We have a backlog of Albertans with untreated conditions and we have an exhausted health-care workforce, yet, the response from Jason Kenney and the UCP is to threaten to cut their wages.”

“At a time when other large provinces are providing incentives for nurses to move there, Jason Kenney is determined to drive nurses and other frontline workers out of Alberta,” Notley said. “That’s a serious threat to the long-term strength of our public health-care system.”

And that, my friends, is a serious understatement. But then, it may also be Kenney’s goal.