We’re all glad that the Two Michaels are home, and that Meng Wanzhou is too. But we’ve been moralizing about it, when we should know by now that in great-power politics, morality is irrelevant.

What the great powers should know is that the pandemic and climate change have made great-power politics equally irrelevant — it won’t be long before that becomes catastrophically evident.

Let’s start with the futility of moralizing. Rehashing the affair in the National Post, Terry Glavin said we should be happy for the return of Michael Kovrig and Michael Spavor, “because everything else about this whole squalid business has given Canadians every reason to feel disgusted, embarrassed, ashamed and angry.” And he wisely doubted that Canadian diplomacy had much to do with their return. Canada itself, as much as Meng and the Two Michaels, was a bargaining chip in the deal struck between China and the U.S.

Still, this is classic big-power realpolitik, and Canada has long benefited from being the protected sidekick of the biggest power of the past 80 years. This time, though, Canada took the kind of kicking the Americans are used to dishing out to weak nations.

China was once such a weak nation. The Communists are in power precisely because earlier Chinese governments were too weak to resist the aggressions of western and Japanese imperial powers. The British waged two Opium Wars against China in the 19th century to force it to accept Indian opium in exchange for tea demanded by Britain. Once enough Chinese were addicted, the Brits raised the price of opium so China had to pay in silver as well as tea.

The Opium Wars resulted in highly unfair trade treaties that included the cession of Hong Kong to the Brits, as well as the concept of “extraterritoriality”— the immunity of foreigners to prosecution by Chinese authorities for breaking Chinese laws. Such offences would be tried by foreign courts or not at all. Nothing personal, just business.

The 20th century saw the decline of the European empires in two catastrophic wars, and the rise of the Americans. Like the old empires, the Americans picked on weak countries. They influenced foreign elections in countries like Italy by pumping money into anti-communist parties. They routinely overthrew democratic governments in countries like Guatemala, Iran, Nicaragua, Haiti and Chile. In Indonesia, they winked at a military coup that killed hundreds of thousands of supposed “communists.” They conducted hostage diplomacy with whole nations like Cuba and Iran as hostages. Nothing personal, just business.

In all of this, we Canadians generally kept clear of direct involvement except sometimes as janitors or rent-a-cops. After president Dwight D. Eisenhower red-carded Britain and France for their invasion of Egypt in 1956, Lester Pearson cleaned up the mess and got the Nobel Peace Prize for inventing peacekeeping.

But when he dared to suggest in a speech that the U.S. might ease up on its bombing of North Vietnam in 1965, president Lyndon Johnson invited him to Camp David, where he personally grabbed Pearson’s coat lapel while abusing him at length for saying such a thing in public.

We made amends later by getting six Americans out of Tehran in the Canadian Caper, earning some transient gratitude. We kept up relations with Cuba and opened them with “Red China,” no doubt maintaining backchannels for the Americans. We were the good cop to the Americans’ bad cop.

Meanwhile, China got through Tiananmen Square and other debacles because the world’s powers (and their clients) saw that China’s price was right. Whether you wanted a squirt gun or an iPhone, it was cheaper if it came from China.

So we poured money into China, and China invested it in education, and infrastructure, and great-power weaponry. Meanwhile we offloaded education costs onto our students and let our infrastructure decay.

A tutorial in barbarian management

When Xi Jinping rose to power, he evidently decided imperial China was back. It was time to show the West and everyone else why Chinese foreign relations was historically described as barbarian management.

After decades of making nice to attract business, China was going to make the West understand who was boss. When Meng Wanzhou was detained at YVR, it was Justin Trudeau’s turn to be grabbed by the lapel and given a good shaking. Nothing personal, just business.

Meanwhile, business carried on regardless. In 2019 our exports to China increased by over eight per cent, and our imports by almost two per cent. We sold China twice as much iron ore as we had the year before. China was dealing with a disastrous outbreak of African swine fever; we literally saved their bacon by exporting over a billion dollars’ worth of swine to replace their herds.

In the first quarter of 2021, our exports rose almost 40 per cent compared to early 2020, including 200 per cent more coal and 100 per cent more iron ore. We also bought half again as many computers and cell phones as we had in 2020, not to mention more toys and 370 per cent more textile articles — such as face masks.

As the containers came and went from Burrard Inlet, we had almost three years of agonized news stories about the nation's evildoing. The Globe and Mail counted the days the Two Michaels had been imprisoned in Chinese cells while Meng languished in her Shaughnessy mansions with an electronic monitor on her ankle. No one liked China anymore. But shutting down trade with China when the economy was already imploding would have been a self-defeating hissy fit.

The end of empires

The real tragedy of the Meng affair is that China is still thinking in imperial terms. Xi Jinping and his Communist party seem to think of themselves as a new dynasty, ruling with the mandate of heaven over the Central Kingdom and managing the barbarians outside it just like the good old days. 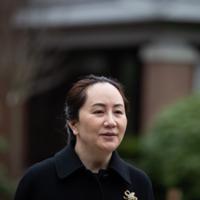 Are the US and China ‘Destined for War’?

But the age of empires is over. All that empires have done, from that of the Yellow Emperor to that of Joe Biden, has been to rise and fall, briefly enriching themselves while impoverishing the planet. The planet is now too poor to sustain another round, but the game goes on.

The great powers, and their clients like Canada, might instead pause and reflect on their weaknesses instead of bragging about their empty strengths. America’s rivers and reservoirs are falling. China’s electrical system is failing, despite all the Canadian coal we export.

Both great powers know their prosperity depends on gross economic inequality, which will inevitably lead to new revolutions amid climate catastrophes. Yet they carry on.

If we adopted our old janitorial role, we might have a quiet word with the U.S., and China, and Russia, for that matter. We could say: Look, it’s the 21st century and we don’t have time for this. We could all fall apart into economic collapse and civil wars by next week. Maybe we’d have a chance to save ourselves and the planet if we co-operate, even if we can’t stand each other.