This week’s election taught us several lessons. First, that most Canadian voters are living very much in the present, and don’t want to think seriously about next month, let alone next year. The Liberals, Conservatives and New Democrats evidently respect that decision, and offered very little about the future except vague climate targets to be reached in faraway years like 2030.

The second lesson was that the People’s Party of Canada doesn’t want to live in the present or think about the future; it wants to go back in time to an imaginary past of rebel individualism.

The PPC and its leader Maxime Bernier have taught us a third lesson. They are politically fearless because they know they can’t achieve power (at least anytime soon). So they can offer a platform that cheerfully rejects (and lies about) most of the received wisdom of Canadian politics, denying even human agency in climate change, and claiming that “under the influence of radical environmental activists and American left-wing foundations, the Trudeau government has done everything it can to stifle the growth of Canada’s oil industry by preventing it from transporting and selling its products.”

The PPC is a magnet for Canadians gripped by the white supremacist fever dream. And on the pandemic, the PPC hasn’t let facts get in the way: “Lockdowns, mask mandates, school closures and other authoritarian sanitary measures have not had any noticeable effect on the course of the pandemic. Regions or countries that implemented strict measures have been as impacted as those that did not.”

The party has then used such fantasies as the basis of performance art politics, notably the flash-mob demonstrations around Canadian hospitals by the organization Canadian Frontline Nurses and Bernier’s own rallies — where the unvaccinated leader mingles happily with unmasked followers.

Compared to the bland going-forward clichés that Justin Trudeau, Erin O’Toole and Jagmeet Singh have handed out, this is entertainingly outrageous. So it gets far more media attention than the PPC would otherwise deserve. While most voters are furious at health-care workers being harassed and disrespected, such tactics also attract alienated people on the fringes, those who may rarely vote. Their concept of “freedom” is more important to them than whatever they imagine health-care workers’ jobs are like in the pandemic.

Now that this strange amalgam of beliefs has a formal home in the PPC, and more than 800,000 Canadians have come to roost there this election, where did they hang out before? Yes, many may have voted Conservative in the past, but by one analysis, a surprising number may have found past appeal in the outlier identity of the Greens.

As the philosopher Kris Kristofferson reminds us, “Freedom’s just another word for nothin’ left to lose,” and the fringe people attracted to Bernier must fancy themselves oppressed by other people telling them what to do. Worse yet, they’re told to do it for the sake of others, when they’ve been brought up since they were toddlers on the idea that individuals should look after themselves, and too bad if they can’t or won’t.

Bernier and his followers also remind us that Canadian “conservatives” are an uneasy association of sectarians, temporarily uniting under flags of convenience like “lower taxes” and “smaller government” and grievances against the power enjoyed by eastern urban “elites.” Since the days of Brian Mulroney, they’ve splintered, united and splintered again. Preston Manning revived his father Ernest’s populist Social Credit Party as Reform; Stephen Harper rebranded it as the Canadian Alliance and used it for a hostile takeover of the moribund Progressive Conservatives. The new Conservative Party of Canada started coming apart as soon as Harper left, and very much as Alberta conservative groups have since Ralph Klein.

Those PPC’s libertarians who had been in the Conservatives were happy to follow Bernier into the wilderness and say what they pleased. O’Toole’s Conservatives looked dull and “moderate” by comparison. So the PPC cut into the Conservative vote, though not by as much as it must have hoped to.

Canadian white supremacists have also seen an opportunity in Bernier, because they have strongly endorsed him, especially on the issue of immigration. For Bernier, this is now just more trolling the politically correct while reeling in a few more foot soldiers. Whether he agrees with them or not doesn’t matter; for now, he just needs them.

So losing must mean nothing to Bernier; if anything, it’s freed him of irksome duties in Ottawa as a barely visible MP. Now he can spend the next year or two roaming the country unmasked and unvaccinated, scandalizing the progressives and moderates and recruiting the fringe Canadians who obsess over make-believe globalist conspiracies in order to believe they are freethinking heroes in an epic showdown.

The parallels to the career of Donald Trump are so obvious they don’t need spelling out. Bernier is a wild colonial boy, watching how they do things elsewhere and doing his best to copy them. He’s managed to get up the collective Canadian nose like an aggressive COVID test swab. We may not like the feeling, and we may hate it when so many of us test positive for his brand of cynical bigotry.

As with the pandemic the PPC dismisses, much depends on our response to Bernier. Some suggest we just shrug at his followers, leave them to their obsessive belief in their idea of individualistic freedom. That would be foolhardy, because of the physical threat their denialism represents to the rest of us. 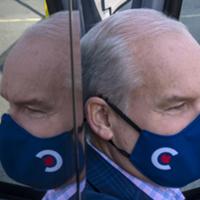 Why Should Anyone Believe Erin O’Toole?

They will try to impose their cracked worldview on other Canadians whether we want it or not. In the process they will discredit science, law, democratic institutions and anything else they see standing in their way. Which will make battling the pandemic in Canada that much more difficult.

In this pandemic, fast and hard public health measures — like those deployed in New Zealand and Taiwan — work better than “be kind, be calm, be safe.” And fast-and-hard works far better than the “personal responsibility” of American states run by Trumpist Republicans like Mississippi Gov. Tate Reeves, who has now lost more of his constituents than died in the influenza pandemic of 1918-19.

But even fast-and-hard only buys time. And time is in the future, which Canadian voters just told us they don’t want to think about right now. The Liberals, Conservatives, New Democrats, and even the left-for-dead Greens will have to dedicate themselves for the next few years to discrediting Bernier and the PPC, and patiently pulling his merry pranksters back into the real world — by giving them something to lose besides their imaginary “freedom.” Something like a meaningful life.