I was having second thoughts about an election night column saying the BC Liberals faced an existential crisis.

Later reports from Elections BC seemed to offer some hope for the Liberals, suggesting the party’s supporters didn’t desert it for a new love. They just stayed home. Which would mean, theoretically, that they could be wooed back by 2024.

But as the week went on, the party’s dire — perhaps hopeless state — become evident.

First, the faint hope for the Liberals. It looks like, when all the votes are counted, about 150,000 fewer people will have voted in this election. If the mail results follow the election day pattern, the Liberals will end up 154,000 fewer votes than four years ago.

And it’s not like there was a tidal wave of support for the NDP. They’re on track to add 27,000 votes to their 2017 total, despite good marks for the pandemic. (The Greens will be down 55,000 votes, but that’s largely explained by the party’s inability to run candidates in 13 ridings this time.)

So you could argue that Liberal supporters just stayed home this time. And that with a new leader and better campaign those people can be won back.

But you’d be wrong. The Ladies Home Journal’s most popular column for more than three decades was “Can This Marriage Be Saved?” Both partners in a failing relationship would tell their radically different stories and a counsellor would say how — or if — divorce could be avoided.

Based on the post-election comments, the BC Liberal marriage of federal Conservatives and Liberals can’t be saved.

Bill Bennett, a cabinet minister in the Gordon Campbell and Christy Clark governments from the Kootenays, wants the party to shift right.

“The B.C. Liberal party has time to renew and rebrand,” he tweeted Wednesday. “If the party fails to respond constructively, quickly and courageously, conservatives will go elsewhere, including some sitting MLAs.” (It’s worth noting that Bennett co-chaired Wilkinson’s leadership campaign.)

“It can’t just all be about sawmills and LNG and an industrial economy,” Johal said. “We’re not having that broader modern conversation. We’ve got to start talking that urban language.”

Liberal party membership chair Nicole Paul had taken a similar position before the election. “We have a problem in the leadership of the party and their lack of willingness to stand up for diversity, inclusion and the values of BC Liberal members — not just the interests of a small group of constituents,” she tweeted.

But long-term Liberal Rich Coleman told the B.C. Catholic, a weekly newspaper published by the Vancouver archdiocese, that the party needs to woo conservatives back.

“We go and reach out again to our conservative friends and — I’m a conservative, so it’s not hard — so people will have this realization, and I think we’ll make it back together,” said Coleman, who last year cited his religious beliefs in opposing both abortion and medically-assisted death.

In short, you’ve got two camps that agree change is needed, but have entirely opposite ideas about what that change should be. One wing thinks the party should be more like the federal Liberals to appeal to urban voters.

There’s no way of forging a compromise that melds such polarized views about the party’s direction. And either option risks disaster. 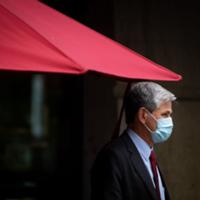 Their ‘Big Tent’ Just Collapsed. Can BC Liberals Make a New One?

Swing right, and the Liberals will be rejected in urban areas. Move to the centre and the door is open, as Bennett noted, to the emergence of a new party — like the BC Conservatives.

Despite the snap election and just 19 candidates, the Conservatives were a factor in this election. They likely cost the Liberals three seats in close ridings, and averaged an 11-per-cent share of the popular vote in ridings they contested.

It’s tough to see a way forward for the Liberals as they try to pick up the pieces after this election.

Especially as the NDP has broadened its base. A Research Co. exit poll found 25 per cent of New Democrat voters had backed the federal Liberals in the last election. The Horgan government may have disappointed some supporters with its slow pace of traditional NDP issues, but it won over other voters.

Can this marriage be saved? Probably not.