New Conservative Leader Erin O’Toole has lots to do. He should start by convincing Canadians his party’s supporters aren’t going to kill them.

An Angus Reid poll looked at how people are responding to COVID-19. It found many Conservative supporters — way more than people from other parties — don’t care much about science, expert advice or their vulnerable neighbours.

And because of their behaviour, people will die.

The poll, conducted early this month, divides Canadians into three big groups based on their self-reported behaviour during the pandemic.

There are the Infection Fighters, people sticking with the guidelines around masks, distancing and travel and taking responsibility for slowing the spread of COVID-19. Encouragingly, almost half of Canadians are in that group.

The Inconsistents — about 36 per cent of Canadians — are following some of the guidelines, but are sloppy about others. Pretty good on handwashing and distancing, for example, but not on staying home or keeping social circles small. They accept the need to follow guidelines to slow the spread, but can be sloppy about it.

And then are the Cynical Spreaders, the scary 18 per cent of Canadians. They don’t wear masks, gather in large groups and generally reject the idea they should change their behaviour based on expert guidance and a sense of responsibility to others. In fact, 44 per cent of them say don’t pay attention to COVID-19 information from experts in their province. Almost 60 per cent of them think the current measures to slow the spread go too far, compared to six per cent for Infection Fighters and 18 per cent for Inconsistents.

And to be Conservative supporters.

Among people who said they voted Liberal or NDP in the last election, eight per cent were Cynical Spreaders. But 31 per cent of Conservative voters — almost one-third — were in that group.

It’s legitimate to debate the political and public health response to the pandemic. But that’s not what Cynical Spreaders are doing. They’re simply ignoring the expert advice and recklessly choosing to put others at risk.

It’s beyond debate that measures to slow the spread work and have saved thousands of lives across Canada. Washington state has had 1,280 COVID-19 deaths; British Columbia, with stricter guidelines, has 204. If B.C.’s rate of death per million people was the same as Washington’s, another 1,280 people would have died in the last six months.

In his first press conference, O’Toole said “Canadians haven’t always seen themselves in our party. I’m going to change that.”

But how, when so many Conservative supporters are out-of-step with the views of most Canadians on so many major issues?

It’s not just COVID-19, though that’s a dramatic example given the lethal consequences.

Take abortion, one of the social conservative issues that failed leadership candidate Peter MacKay described as “a stinking albatross” around the neck of former leader Andrew Scheer.

O’Toole says he’s pro-choice and shuns most social conservative policies. His voting record mostly suggests that’s true, which aligns him with most Canadians, according to polls.

But Derek Sloan and Leslyn Lewis, both anti-abortion social conservatives, captured 40 per cent of party members’ votes on the first ballot. O’Toole ultimately won because their supporters chose him over MacKay when ranking candidates on the preferential ballot.

People supported Sloan and Lewis for a variety of reasons. But despite O’Toole’s claims, mainstream voters have reason to fear the party’s future direction on the issue.

Climate change and environment was in the top three for 40 per cent of Canadians. For 65 per cent of Liberal supporters, 58 per cent of NDP supporters and 71 per cent of Green voters it was among the greatest challenges.

But only eight per cent of Conservative supporters cited climate change and the environment as an important issue. (The only issue they considered less important was income inequality, at four per cent.)

Like Conservative supporters’ response to COVID-19, the rejection of climate change goes beyond a policy difference and into a world where science, expertise and evidence have no relevance, and where the wishes of every individual at that moment matter more than the common good or society’s future. 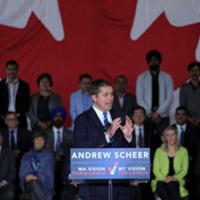 People with those kinds of views and attitudes are going to end up finding a home in some political party. But the Conservatives have courted them, fighting action on global warming, allowing MPs to attack public health officials, fuelling anti-immigrant sentiments and shunning Pride parades. In an interview aired on Global TV Sunday, O’Toole continued the approach, refusing to say whether he believes systemic racism exists in Canada.

On one level, the approach has worked. The Conservatives won the popular vote with 34.4 per cent in the 2019 election.

But it’s come at a high price. The path the Conservative leadership has chosen means, as O’Toole says, that “Canadians haven’t always seen themselves in our party.”

The pandemic poll shows how dangerously far the party has gone down that path. The Conservatives are now the party of people who reject science and expertise and place their personal whims and wishes above the lives of their neighbours.

And with almost one-third of supporters in that camp, O’Toole’s promised change looks as likely as a magical end to the pandemic.