Andrew Scheer has an abortion problem.

The Conservative party leader has walked — or stumbled — along a tightrope on the issue. He’s trying to convince anti-abortion religious conservatives who helped him win the party leadership that he’s on their side, while assuring mainstream voters he’d never allow new laws restricting abortion.

It’s a contradiction that even baffles Conservative insiders.

Like Olympic gold medalist Sylvie Frechette, a star candidate in Quebec. She told a Radio Canada host that a Conservative government would not allow MPs to re-open the abortion debate.

Two other Quebec candidates, Isabelle Lapointe and Jessica Ebacher, also said the party was clear the debate “wouldn’t be reopened.” They wouldn’t have run for the Conservatives without the guarantee, they said.

And MP Alain Rayes, in charge of recruiting candidates in Quebec, said in an interview that Conservatives would be barred from raising the issue. “Andrew Scheer has confirmed that he will not allow even one of his MPs to present an anti-abortion bill,” Rayes said.

Not true, said Scheer’s office. Raye must have “misheard” the party’s position on abortion.

But he also said Conservative MPs would be allowed to introduce legislation limiting access to abortion. And to vote for restricting access, if that was their personal view. And while he would expect cabinet ministers to vote against limiting access, he wouldn’t demand they do.

All of which leaves at least the possibility that under a Scheer Conservative government, new laws could limit Canadians’ access to abortion.

Scheer says that his approach is the same as the Stephen Harper government. Conservative MPs introduced three bills aimed at restricting access to abortion in the Harper years; all were defeated.

But there are some big differences. 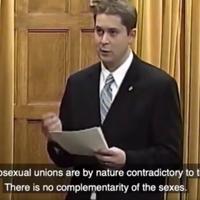 Young Scheer Was Even More Anti-Gay Marriage than Harper

First, Harper had united the right and vanquished the Liberals. He had earned respect from caucus and kept tight control. Scheer, however, limped into the leadership. He was the first choice of just 22 per cent of party members and, after 13 ballots, eked out a win with 51 per cent of votes to Maxime Bernier’s 49 per cent. It’s not a mandate that gives a leader great authority.

Second, Harper never seemed particularly committed to religious conservative causes. Scheer, however, is ranked as “100-per-cent prolife,” by anti-abortion political group RightNow, “arguably the most pro-life leader the Conservative Party of Canada has seen since John Diefenbaker.” (Whose term as leader ended more than 50 years ago.) Scheer’s opposition to same sex marriage in a rather odd 2005 Commons speech released by the Liberals suggests a real commitment to religious conservatism.

And fourth, anti-abortion forces, while a small minority, have found ways to exercise great influence (like helping Scheer get his chance to be prime minister).

RightNow, for example, boasts of its success in working with other anti-abortion groups to shape Conservative policy at its convention last year. RightNow credits a careful, strategic campaign to ensure sympathetic delegates made it to the convention, controlled the policy process and won support for religious conservative policies.

The efforts paid off, as a number of resolutions supported by the groups became party policy. They missed the winning the big prize — a motion to rescind the current policy that says “A Conservative Government will not support any legislation to regulate abortion” failed to pass. But the margin — 806 to 701 — was narrow and RightNow is already planning for victory at the next convention in 2020.

Anti-abortion activists are a fringe group. More than 75 per cent of Canadians support access to abortion; only about 12 per cent want it banned.

But they’re committed to the cause, acting on what they believe are the wishes of the God they worship. (Which means there is not much point in attempting to change their minds, a fact I urge readers to consider if they participate in the comment section below this article.)

And they can be politically effective, nominating candidates who will support their positions and campaigning for them. (Although, perhaps as a result, parties are increasingly taking the nomination process away from riding associations.) 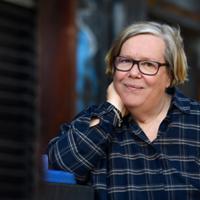 The Fight for Equal Marriage, with No Help from Jason Kenney

RightNow says it has targeted 50 swing ridings across Canada where it plans to recruit and train volunteers to campaign for Conservative candidates who oppose abortion and right-to-die laws. Campaign Life Coalition has an online voter’s guide and is already endorsing 15 candidates in B.C. Only eight are Conservatives. The group, not pragmatic, is backing no-hope People’s Party and Christian Heritage candidates in another seven ridings. Still, in close races, even that could be bad news for the Conservatives.

In close races — and close elections like this one — a small committed group can decide who wins and which party forms government.

And, despite the significant procedural hurdles, the candidates they help elect — from any party — could pass legislation that would limit rights based on their religious agenda. (Green Leader Elizabeth May has also struggled with the issue. While Green MPs would have freedom to vote as they choose, screening will ensure no one who supports new laws to restrict access to abortion could become a candidate, the party says.)

The Conservatives would like voters to forget about the issue.

But so far, nothing Scheer has said has truly closed the door on new laws to limit access to abortion under a Conservative government.