In Jason Kenney’s head, Alberta is still in an oil boom.

The premier seems to be living in a world where government coffers are overflowing with royalty revenues, everyone has a job and the province’s powerhouse economy affords him the indulgence of giving the rest of the country the finger.

Kenney’s pet projects include a proposal to withdraw the province from the Canada Pension Plan at a potential cost to Alberta taxpayers of $133 billion, a referendum on the equalization formula he helped craft, and throwing another million dollars at a so-far-fruitless inquisition aimed at identifying foreign charities undermining the province’s oil and gas sector.

Outside the palace walls of the premier’s office, other issues seem more pressing.

This month energy giant BP announced that it was writing off US$17.5 billion in global oil and gas assets. The value had been based on an average price for benchmark Brent Crude of $70 per barrel. Now BP forecasts prices around $55.

The write-off was just the latest indication of a seismic shift in energy investment.

“The world’s carbon budget is finite and running out fast; we need a rapid transition to net zero,” said Looney in a speech to investors at International Petroleum Week. “To deliver that, trillions of dollars will need to be invested in replumbing and rewiring the world’s energy system. It will require nothing short of reimagining energy as we know it.”

Some might dismiss this as greenwashing. However, shareholders seemed pleased with his statement. BP’s stock price rose 1.3 per cent on the announcement.

Helge Lund, BP’s board chair, backed Looney. “The board supports Bernard and his new leadership team’s ambition for BP. Aiming for net zero is not only the right thing for BP, it is the right thing for our shareholders and for society more broadly.”

The Pope, the Queen and some of the world’s largest investment firms are all calling for a turn away from carbon-intensive investments. Fracking giant Chesapeake Energy just filed for bankruptcy, crushed by $9 billion in unserviceable debt.

Facing this looming economic storm, Kenney and his United Conservative Party government are acting as if the most pressing issues facing the province are picking old scabs of federalism, even as his party applied for a COVID-related wage subsidy from the Trudeau government.

The so-called Fair Deal Panel just released a list of grievances. In an apparent effort to further enflame his political base, Kenney’s government also introduced a bill to allow referendums on any issue the government deems in the public interest, with third parties allowed to spend $500,000 to influence the outcome.

To be clear, the COVID-19 crisis is far from over. Individuals and governments should be busy battening down the hatches and preparing for what could be a grim fiscal reckoning. Alberta has additional problems as a result of failing for decades to build a diversified economy, leaving it dependent on fossil fuels — an indulgence that has only grown worse under Kenney at the end of the oil age. Add to that ballooning unsecured environmental liabilities from abandoned wells and oilsands tailing ponds, and this hardly seems the time for amped up western bluster.

These are challenging and scary times. People worried about their incomes, debts and personal health are eager for comforting narratives from elected leaders. Like other populists around the world, Jason Kenney seems captive to the divisive playbook that brought him to power. But culture wars or magical thinking will only delay dealing with the difficult choices and hard work needed to weather the coming storm and build a resilient post-COVID economy.

In the U.S., the pandemic has roared back to life under the chaotic clown show that is the Trump administration. More than 125,000 Americans have lost their lives yet the president seems more concerned about protecting statues than people. Trump recklessly boasts that the worst of the crisis is behind us, that testing is part of the problem, and that an enormous economic recovery is right around the corner. 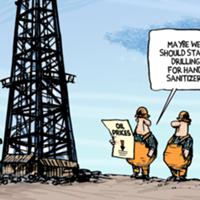 Incredibly, he still seems to enjoy the support of more than 40 per cent of the country. The voices of enraged Republicans ring out at public hearings, chafing at local rules requiring face masks — or even the precept of science itself.

From this side of the border it is easy to smirk at such politically enabled ignorance. But are we any better? The Kenney government is engaging in similar tactics with frightened Albertans on the cusp of a global energy upheaval. Scarce time and public money needed to pivot toward the future are being squandered at the altar of Alberta exceptionalism.

And for the moment, this timeworn western ruse seems still to be resonating. While the world rapidly moves away from high-cost, high emission fossil fuels, 46 per cent of Albertans say they would vote for Jason Kenney and the imaginary oil boom in his head.