The first debate for Vancouver mayoral candidates Monday night showed why independent candidate Kennedy Stewart is the favourite to win on Oct. 20.

But Stewart, former NDP MP for Burnaby South, was able to use his position as the leading left-wing candidate to launch attacks on the crowded field of right-wing contenders.

Recent polling suggests Stewart is a frontrunner for Vancouver mayor. The debate suggested one reason why.

The past three Vancouver elections were essentially stand-offs between the Non-Partisan Association, Vision Vancouver and, to a lesser degree, the Coalition of Progressive Electors. But new campaign finance laws have opened up the competition and created a crowded field.

Sim, Bremner and Young — as well as ProVancouver’s David Chen, Vancouver First’s Fred Harding and independent Golok Buday — lean politically to the right. They are competing with each other to win votes from people who don’t necessarily see themselves as progressives.

Stewart is the only clearly progressive candidate. This allows him to stake out a left-wing identity distinct from the other candidates.

This advantage was clear in closing statements near the end of the nearly two-hour debate, which was hosted by the Vancouver Courier, Business in Vancouver and Vancouver is Awesome.

“I really worry about this city, this city’s given me everything and I think it’s in real trouble,” Stewart told a capacity crowd of about 200. “I know what to do when I get to City Hall, but I need a progressive city council and what I’m really hoping is if you vote for me you’ll also consider candidates from OneCity, Jean Swanson… and I think there are some other great candidates in Vision too.”

Stewart’s message was obvious: a vote for him is a vote for a progressive Vancouver.

The NPA’s Sim came later. He led the polls with a slight advantage over Stewart in July. But more recent polling shows him battling for second place with Bremner, well behind Stewart.

As the candidate for Vancouver’s traditionally right-leaning political party, you might expect Sim to seek support from voters on that side of the political spectrum.

Yet in his closing statement he took a different approach.

“Mr. Stewart, you say you can work with people because you’re a bridge-builder, but then you went and said ‘please vote for these different [progressive parties].’ That’s not inclusive,” Sim argued. “When you actually look at the NPA’s candidates, they’re diverse. We actually have five women running for council versus three men, we have ethnic diversity, sexual orientation diversity, socioeconomic diversity… there is no left or right in our party, there’s representation from every corner of our city.”

The party can make a credible claim that its candidates show it is socially progressive.

Yet Sim is clearly to the right of Stewart on economic issues. “You’ve founded a number of successful business ventures but you don’t have experience in politics… how would you run City Hall differently than you run your business?” Lindsay William-Ross from Vancouver Is Awesome asked Sim.

Sim didn’t need to ponder the question. “I would run it the exact same way.”

Sim must strike a balance between signalling to centre-right voters he has their business interests at heart while also trying to portray the NPA as beyond partisan politics. That would let him avoid direct competition with his centre-right challengers.

Those challengers are trying a similar approach. Bremner comes from a corporate background and wants to “welcome people from across the political spectrum.” Young, a former Conservative MP who has referred to Stewart as a “socialist,” nonetheless refers to her party as “democratic, open, welcoming and inclusive.”

Stewart, meanwhile, has every incentive to highlight the partisan similarities between the three candidates to help split the right-wing vote.

“I like to say there are three NPA candidates in this race,” Stewart said, alluding to the fact that both Bremner and Young at one point sought the NPA’s nomination. “So you have your choice.”

Stewart was recently arrested protesting the Kinder Morgan pipeline and has argued that housing is a “human right.” As a clear progressive candidate, he can focus his attacks on more conservative rivals. In the debate he accused Bremner of pushing a housing plan based on “bulldozing neighbourhoods and building massive towers,” with “no protections against foreign speculators.”

Candidates like Bremner, meanwhile, must fight a multi-front battle against Stewart and their rivals on the right.

“The issue here is not bulldozing neighbourhoods and fear-mongering and dividing people in such a way and throwing in the words ‘speculator’ and ‘foreigner’ just for good measure just to scare you up,” he said in response to Stewart.

Yet Bremner at the same time attacked the NPA. “It’s been a bumpy year for democracy in the city of Vancouver,” he said at one point, alluding to the NPA’s rejection of his bid to run for mayor.

The clearest centre-left challenger to Stewart is independent candidate Sylvester. Yet she chose to downplay her progressive identity. 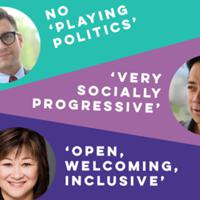 Is the Party Era in Vancouver Politics Over?

“At the heart of this is, ‘Who is this city for, is it going to be for us, or is it going to be for others who don’t live and work here anymore?” she said during her closing statement. “I entered into this race because I feel like this is the one point in our history where we need an independent voice that’s experienced. I am the only independent candidate that has that level of experience and does not have that political alignment.”

Sylvester — like Sim, Bremner and Young — may see herself as beyond partisan politics. By taking that position, though, she is flattening the policy differences between her and her centre-right competitors, who also claim that they’re beyond left versus right.

Like them, Sylvester has to fight a two-front battle against Stewart and everyone else.

Stewart, by owning his progressive identity and not having anyone further to his left to challenge it, only has to aim his attacks one way — towards the political right.

A lot could change by Election Day on Oct. 20. But for the moment it’s Stewart’s election to lose.