Seven years ago this month, the Truth and Reconciliation Commission began its journey across Canada collecting testimony from residential school survivors, their families and former school employees. 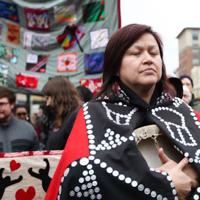 Funded by a settlement between survivors and the Canadian government and several Christian churches, the Commission wrapped up this month with the release of the executive summary of its long-awaited report on the impact of residential schools.

To both acknowledge and counteract the impact of decades of the forced assimilation and abuse of aboriginal children -- what the Commission has called "cultural genocide" -- the summary includes 94 "calls to action" or recommendations for nationwide change.

Check it out here.

If we've missed one in your community, send Brittany an email, and we'll do our best to add it to our page, or at least tweet it to our readers in advance of the day. Please include a link if one is available.

Every level of government, as well as the heads of several churches, have been called on to dramatically shift how they interact with and support Indigenous people in Canada.

This isn't the first time a report has called on Canada to shape up its indigenous-government relations. Previous reports, including the Royal Commission on Aboriginal People published in 1996, still sit on shelves gathering dust, with many recommendations unfulfilled.

We asked five people invested in reconciliation about possible next steps, and how to keep the process alive. Below is a snapshot of their thoughts.

1. Stay the course, and risk another Idle No More.

Grand Chief Stewart Phillip, president of the Union of BC Indian Chiefs, said the next move should come from governments and church leaders, by implementing the report's 94 recommendations. Maintaining the status quo, he adds, will only make reconciliation harder.

"In the event that the status quo continues, in spite of these interventions calling for change, then the poverty of aboriginal communities will continue to deepen and intensify," said Phillip, member and former chief of the Penticton Indian Band.

"But more importantly, the resentments and the anger and the frustration will continue to build, and we will see a rebirth of the Idle No More movement."

2. Reconciliation will take decades to fulfill.

"Reconciliation is going to take 20 to 30 years, at a minimum," said Victor Wong, executive director of the Chinese Canadian National Council.

Wong, who served as an honorary witness during a Toronto Truth and Reconciliation Commission conference in 2012, said non-indigenous Canadians must recognize they've benefited from a society established, at least in part, by the forcing of Indigenous people to the margins.

"For example, just ask city hall how many Indigenous people work at city hall. Or in a provincial government," he said, adding the same question could be asked of Canada's biggest banks and corporations.

"It is a legacy of the colonial system. We are trying to address it... but it still exists."

3. Treaties should be front and centre.

British Columbia is unceded First Nations' territory, meaning land treaties were never signed between settlers and the region's original inhabitants. Since 1992, the BC Treaty Commission has served as an independent facilitator for negotiating these deals between First Nations and governments.

A little over half of B.C.'s 203 First Nations bands are involved in the province's treaty process. To date, eight treaties have been completed, with implementation ongoing for six and scheduled to begin for the other two next year.

Sophie Pierre, a member and former chief of the St. Mary's Indian Band, sat at the helm of the BC Treaty Commission from 2009 until earlier this year. She said that negotiating, signing and implementing the nearly 200 outstanding treaties is an essential first step: "I still firmly believe that the best expression of reconciliation is a fairly negotiated and a honourably implemented treaty."

Vancity executive Linda Morris said it's important that corporations don't ignore the economic "calls to action," including the training and hiring of more indigenous employees, as well as ensuring that every employee knows the history of indigenous-settler relations, including residential schools and treaties.

"We feel that people can't prosper and live good and productive lives unless they are really a part of the greater economy," Morris said.

5. It's about apologies, but also gratitude.

Aboriginal historian and academic Georges Sioui, a member of the Huron Nation, said that reconciliation's next step should be replacing residential school apologies with an acknowledgement of and thankfulness for the sacrifices Indigenous people made during Canada's creation.

"I've never found it sufficient to say 'excuse [me],' to say 'my apologies,' or to ask for apologies," he said, adding that millions of Aboriginal people have died by disease, war and starvation since contact with settlers.

A plaintiff in the Supreme Court of Canada's landmark ruling affirming the rights of Indigenous people to practice religious and cultural traditions on their land, Sioui said that reconciliation will hit home for Canadians when they're reminded of the traumas that Indigenous people experienced outside of residential schools.

"Lots of nations and confederations of peoples have disappeared in the process [of creating Canada] and have made the ultimate sacrifice of the existence of their tribes and nations. Many of them have ceased to exist completely," he said.