Are Co-operatives a 'Better Way?'

As of 2012, there were an estimated 1.4 million co-operatives in existence worldwide. Far from being a product of the flower-child era, co-ops are among the world's oldest and most resilient forms of social enterprise, ranging from the very large (Best Western, for example) to the very small (Vancouver-based SHIFT, for example), and today they have grown to hold a stake in everything from agriculture to politics. 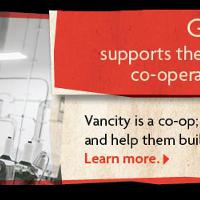 Are Co-operatives a 'Better Way?'

In fact, so far-reaching is their influence that in 2009 the United Nations passed a unanimous resolution naming 2012 the International Year of Co-operatives, to recognize their contribution to our social and economic landscape.

In Canada, Oct. 13 to 18 is Co-op Week. Just in time for the festivities, The Tyee presents five facts about a movement centuries in the making.

1. They've been around longer than you think

That said, modern co-operative businesses can trace their roots back to the Rochdale Principles, a set of guidelines developed in England in 1844 by a group of labourers known as the Rochdale Society of Equitable Pioneers.

They are believed to be the first co-operative in history to pay a patronage dividend, rewarding members financially for their investments. Every one of its 28 members paid a pound each toward housing, the establishment of a co-op store and the manufacture of goods, with the direction of the business to be determined solely by the members (this, especially, was unusual at the time).

And while the Pioneers are the most often cited example of early co-operative success, Rochdale in the mid-1800s was a hub of co-op activity (born from the depths of Industrial Revolution poverty and unemployment), beginning with the Rochdale Friendly Co-operative Society formed in 1830.

Rochdale was a solid beginning for the co-operative movement, and its establishment in North America wasn't far behind. Co-op organizations began appearing in North America in the late 1840s (often developing hand-in-hand with the burgeoning labour movement), with the first true co-op store in Canada opening in Stellarton, Nova Scotia in 1861.

Farming co-ops were the first to have widespread success in Canada; between 1860 and 1900, farmers in Ontario and the Maritimes were responsible for developing a number of co-operative cheese and dairy factories, as well as mutual insurance. And 1906 saw the birth of the Grain Growers' Grain Company, which allowed prairie farmers to market directly to millers, as well as buyers in Europe.

These days, there are co-ops in every corner of the business landscape, influencing how we get around, how and where we live and what our communities look like.

On the local level, the car-sharing co-op Modo, which now boasts 250 vehicles and 10,000 members across the Lower Mainland, began back in 1997 with only two cars and 16 people.

Housing co-ops have existed successfully for decades, with many residents (such as those in Kitsilano's Trafalgar Housing Co-op gearing up to celebrate their final mortgage payments before the end of the decade. Newer co-ops also continue to be developed and financed, including the First Avenue Athlete's Village, where 25 per cent of the units feature below-market rents.

There are also community-minded organizations like Common Thread (which employs mentally ill, newly-arrived, and low-income women to make tote bags from recycled street banners), as well as Our Community Bikes and the Vancouver Tool Library which provide members with tools they can borrow and workshops and seminars on how to use them.

And did you know that Ocean Spray (of Cranberry Cocktail fame) is a co-op? In existence since 1930, it includes more than 650 growers across North America, and as of 2005 boasted profits of more than $1.5 billion. Commercial cranberry producers have been involved in the co-operative movement for more than a century, and in fact, Ocean Spray's collective ownership structure has allowed it to survive a number of disastrous developments over the years, including a USDA cancer scare in 1959 (which saw fresh cranberry sales literally plummet to zero), and a widespread price collapse in the 1990s. Though it was originally founded under a far less catchy name ("Cranberry Canners, Inc."), and initially sold little more than jellied cranberry sauce, the co-op is now the largest collective producer of cranberries in the world.

3. Two of the world's most valuable soccer franchises are co-ops

Believe it or not, Real Madrid, the most valuable football club in the world (estimated to be worth €3.3 billion in 2013), has been owned by fans since its foundation in 1902.

In that time, they have also been one of the most successful, going on to win nine European cups -- more than any other team in Europe. In addition, the team also holds the record (which they have broken three separate times) for paying the highest transfer fees ever recorded, acquiring Zinedine Zidane (€76 million), Cristiano Ronaldo (€96 million), and mostly recently Gareth Bale (€100 million).

Adding fuel to the fire, FC Barcelona, Real Madrid's chief rival (and the third most-valuable soccer franchise in the world) is also owned by its supporters. Formed in 1899, FC Barcelona now holds more official titles than any other team. And, while fan ownership certainly increases passion for the game (FC Barcelona has a record 45 million fans and counting), it has also contributed to the bitter rivalry between the two teams; Madrid fans are already notorious for stooping to racial insults against opposing players, and on one occasion, Madrid fans even assaulted Barcelona chairman Enric Pi&ntildeeyro.

And fan ownership doesn't stop with Europe; the Saskatchewan Roughriders, one of few publicly-owned sports franchises in North America, has sold shares to the public on a number of occasions throughout its history, allowing shareholders to determine the team's future by voting on key issues.

4. Working for a co-op may increase your life expectancy

Not according to Dr. David Erdal, who wrote his PhD thesis on precisely that. In 1997, Erdal compared three cities in the Bologna region of northern Italy -- all prosperous, with low unemployment rates, and all within 50 miles of one another. On paper, the three cities were statistically identical, except in one key region: employee ownership.

One town, Imola, had 26 per cent of its population employed in worker co-ops, while the others (Faenza and Sassuolo) had 13 per cent and zero per cent, respectively. What he discovered was startling: not only was the population of Imola living 2.5 years longer on average than in the other two regions, but they also scored better in virtually every metric he surveyed, including health, education, crime, social participation and perception of the social environment.

In Imola, a town where one in four workers is employed by a co-op, the entire population experienced significantly less cardiovascular disease, less crime (including less domestic violence), higher voter turnout and less social and economic stratification. They even donated blood more frequently. And while Erdal's study was the first of its kind, it speaks to broader social changes that are allowing co-ops to increase in both size and influence, playing a part in community and even politics, and strengthening a movement 600 years in the making.

5. They'll be around longer than you think

Even in the face of the current global recession, the future of co-op business is staggering in scope, reaching beyond the business landscape, even into public utilities and government. Currently, it's estimated that there are more than 30,000 co-ops operating in the United States alone. Spain's Mondragon Corporation, formed by a handful of technical college grads in the Basque region, now employs more than 80,000 people.

Despite a shaky history which dates back to the 1920s, the U.K.'s Co-operative Party (a political association which represents the interests of -- you guessed it -- co-operatives), has since the late 1990s grown to become the fourth-largest political party in Britain, exercising considerable influence over both past and present-day policy-making.

In fact, co-operative businesses in Britain have remained remarkably resilient since the recession, a 9.8 per cent overall increase in revenue since 2008 (compared to a 1.7 per cent decrease in the general economy). Not only that, but the co-op model seems to contribute to business longevity. After three years, 98 per cent of British co-op companies are still trading on the stock exchange, compared to only 65 per cent of private ones.

And in the face of a current debt crisis that threatens to see their public water supply sold into private hands, the people behind Thessaloniki, Greece's Initiative 136 are taking a stand, and working to transfer the public utility into the hands of a network of citizen-owned co-ops. While it remains to be seen whether the initiative will be successful, it speaks to broader social changes that are allowing co-ops to increase in both size and influence, playing a part in community and even politics, and strengthening a movement 600 years in the making.