Researchers and venture capitalists are investing upwards of $15 million to engineer a creature that would be, effectively, a hairy Asian elephant.

The new startup company, Colossal, seeks to artificially combine DNA recovered from extinct woolly mammoths with that of Asian elephants to create a hybrid that could re-colonize Arctic tundra ecosystems.

As a conservationist studying the behaviour and ecology of living elephants, I’m not thrilled. The effort squanders resources to re-engineer a species that evolved for a world that not only doesn’t exist but is actively growing more hostile to it.

First, biology. Certainly, the technical challenges are exciting and could lead to breakthroughs that might be both profitable and useful for rescuing threatened or recently extinct species. But if that’s the goal, are elephants — with the longest gestation period in the animal kingdom — really the best way to start?

Their iconic appeal is understandable, but then why not the Sumatran rhinoceros, or dodo? The former is magnificent and critically endangered, the latter is literally the poster child for extinction; neither requires 20 to 22 months to develop offspring. The Wright brothers did not launch their dream of flight by seeking to build a transatlantic jet.

Next, genetics. To survive and thrive, an animal population must have enough individuals to maintain genetic diversity. The last known population of mammoths clinging to existence on Wrangel Island (now a remote part of Russia) numbered several hundred, yet genetic deterioration likely contributed to their eventual demise.

How do we make sure that the genome we engineer does not harbour thousands of debilitating mutations? Today, conservationists struggle to preserve genetic diversity in critically endangered species such as Przewalski’s horse by freezing the sperm of as many males as possible. What options would there be for mammoths?

Third, behaviour. Mammoths, like elephants, were social animals. They would have required companions to develop normally and learn essential skills such as communicating and foraging. What would this mean for a solitary hybrid, or even a herd?

And captive elephant populations around the world have thus far proven to be unsustainable. Many zoos are giving up on housing elephants given the difficulty of breeding them, as well as maintaining adequate welfare conditions. Indeed, entire networks of present-day reserves and national parks are insufficient to meet the ranging requirements of living wild elephant populations, which are also declining.

Fourth, climate. Mammoths, it is argued, would enhance the ability of Arctic ecosystems to capture and store more carbon in the form of grasslands. Even if this were true, the requisite number of mammoths and the space to house them would far outstrip any reserve, existing or planned.

What’s worse is that the Arctic is warming at a pace faster than a few hundred or even thousands of mammoths can put a dent in. Possibly Siberia in the future may be able to accommodate Asian elephants themselves — adapted as they are to warmer climates.

Fifth, people. Who wants mammoths in their backyards? The primary threat to Asian elephants today is habitat loss, alongside so-called “human-elephant conflict,” which afflicts elephant populations worldwide. True, Siberia is much less densely populated than landscapes now traversed by elephants. But if mammoths are to be more than a niche safari opportunity, they will need to roam. If so, residents had better be ready to accept them.

And finally, money. The entire budget of the U.S. Fish & Wildlife Service's Asian Elephant Conservation Fund grants program for this year is US$4 million. This represents funding to safeguard the remaining 45,000 to 50,000 Asian elephants over what remains of their highly fragmented range.

They face ongoing land use and climate change, wildlife trafficking, political corruption and a host of other threats. The dozens of conservation efforts scrambling for these funds typically make do with around $50,000 or less per year.

The difference between the amount of funding required in order to achieve our goals for a sustainable world, and the funds available, is widely known as the “conservation finance gap.” While economists and conservationists are trying to devise creative schemes to close this gap, perhaps all we need is to attract the attention of a few wealthy donors.

An investment of $15 million in a single company might seem modest, given the obscene amounts of funding Silicon Valley funders routinely dispense, but it would keep a field site such as a mine operational for more than 300 years (not accounting for inflation).

This case does not stand in isolation. It’s an example of the disconnect between what wildlife needs and the way that wildlife is marketed to the public, particularly in western countries. Charisma sells, but rarely does it actually benefit the species (or adjacent human communities) in question.

A somewhat sobering study titled “The paradoxical extinction of the most charismatic animals” points out that many of today’s living megafauna — the animals that adorn children’s nurseries and corporate logos alike — are in fact threatened with extinction. 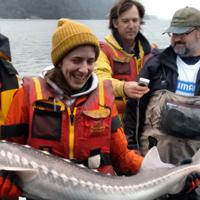 Bluntly put, we exploit the iconography of these species without payment, since an elephant or lion cannot demand copyright protection for the use of its likeness. Their rescue will not come from mere adoration or fancy technologies but from the dedicated efforts of all parts of society to reimagine and genuinely invest in reforming social, political and economic systems in a manner that is conducive to sustaining life on Earth.

To reintroduce an Ice Age giant to a rapidly warming and increasingly populated planet seems irresponsible to say the least. More than that, it is fundamentally exploitative.

Gleefully investing millions into a venture with little thought of consequences, frankly, reveals the incredibly entitled hubris of extremely privileged scientists and technocrats from the Global North who operate under the naive assumption that what is good for them is good for all.