Hi there, neighbour! How about this weather?

Put a sock in it, neighbour. I think there’s one thing we can all agree on — that recent double rainbow we saw in Vancouver was some serious bullshit. Isn’t the whole rainbow concept supposed to be God rolling the end credits on His mighty wrath? All is forgiven, happy days ahead? Dr. Steve is beginning to think maybe that Good Book is not quite as good as advertised.

Wet? Lordy. Dr. Steve is pretty sure he just saw a squirrel with gills. And the whole year has been crazy in B.C.: wildfires, drought, atmospheric rivers, bomb cyclones, a tornado and now epic rainfall, flooding and massive waves smashing into the Vancouver seawall. Who angered Jehovah, anyway? Dr. Steve knows. It was the Canucks. Even the Lord is pissed off at Jim Benning, and Yahweh does not need to rent a plane to say so.

So anyway, here we are after the latest storm, with a giant barge parked in English Bay. It’s empty now of course — all the animals came out two-by-two. If you’re driving this week, keep an eye out for giraffes. Also, you might want to consider an outboard motor.

This latest atmospheric river was a veritable Mississippi. The effects were no joke — it was very serious stuff. Homes flooded, power outages, Merritt evacuated, people stranded, flights cancelled, roads washed out, cars washed away. There was so much flooding, BC Ferries was all set to compete with DoorDash. OK, that was a joke. Sorry.

People have been talking about supply chain disruptions for months now. Those are now officially known as the Good Old Days. At least we had roads back then. As of now, highways into the Vancouver area are washed out, flooded or blocked. And Christmas is still more than a month away, so no emergency supplies from Santa. If anybody else has a line on some flying reindeer, maybe you could fly us in some soup and toilet paper and such? This year’s hottest Christmas gift: Chef Boyardee.

Supply disruptions could soon result in empty store shelves, and we will be back to those dreary early-pandemic days of hoarding. How tedious. Dr. Steve does not want to have to punch you for that last package of dried pasta but if he must, he must. Hold still, damn you. 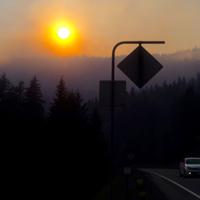 Lawlessness will soon take hold. For those roving scavengers who have heard whispered tales of Dr. Steve’s glittering hoard of Triscuits and Kraft Dinner, be forewarned. Dr. Steve is deadly with a slingshot and a soup can.

Crazy weather events, taken individually, are not necessarily proof of anything. But a cluster of them like we’ve experienced can be taken, at the very least, as a preview of coming attractions. The UN COP26 climate conference just wrapped up in Glasgow, where world leaders discussed and formulated and fudged on climate change strategies. If only some Nostradamus could have scheduled that event for Vancouver. There wouldn’t even have been a need for PowerPoint presentations. Just a big picture window. And plenty of extra flashlight batteries.

We have been through quite a stretch around here, and the aftermath is still to be dealt with. Try to look on the bright side though. There has been very little wildfire news of late.