Six days ago the Tyee published a carefully reported piece headlined “Worries Rise that NPA Board Could Run Extremist Candidates in 2022” with a sub-headline: “Recent appointees add to the number of party directors who’ve espoused far-right views.”

Today the NPA issued a statement in response to both pieces. Its headline is attention getting: “NPA Board Responds to False and Defamatory Accusations.”

But neither the headline nor what runs under it reflects what The Tyee published.

We stand by our story and the fair and diligent methods used by Melanie Green to report it. We reported that Angelo Isidorou, recently made a board member of the NPA, was photographed in 2017 with others flashing a hand gesture associated with white power extremists.

He has joined an NPA board that has evolved in recent years and now includes some members who’ve espoused highly controversial hard-right views. There is evidence a previously reported schism between the board and elected NPA politicians is widening.

And, as we reported, NPA bylaws allow the board to decide the slate of politicians the party will run in the 2022 election.

However, we did change one fact to reflect the NPA’s statement. In our piece we included former BC Liberal and NPA politician Sam Sullivan’s view that Isidorou was a teenager when he flashed the hand signal and so should not be held accountable. The NPA says Isidorou was in fact 20-years-old at the time, so we’ve amended our piece to reflect that.

The NPA statement is vaguely signed by Vancouver Non-Partisan Association, though the contact given at the top of the press release is party president David Mawhinney.

And the statement leads off confusingly by first citing the Tyee and Sun pieces and then going on to attack “the article.”

The Tyee article is not part of any “clearly coordinated smear campaign” against Isidorou. It’s a news article independently reported and published in the public interest. The NPA offers zero proof of its defamatory claim.

The NPA claims, “The photo taken of Angelo when he was only 20-years-old was not given the correct context. In particular it appears that the writers of these attack articles deliberately ignored attempts by Isidorou to set the record straight.” In fact, much of The Tyee piece demonstrates our persistent attempts to provide context for the photo.

Naturally, we approached Isidorou himself, who claimed he was bound by a non-disclosure agreement with the NPA and would not be quoted.

Among the factual context we provided was the history of the hand gesture and its identification with white power extremism, with links to authoritative articles. Here are two more:

The New York Times: “How did the OK sign become a symbol of white supremacy?”

For further context, we noted the event Isidorou and his symbol-flashing group were attending in their MAGA hats was an anti-Trump rally.

We also attempted to glean context from a number of people currently connected with the NPA. However, as the article states: “Multiple requests to the NPA councillors, park board commissioners, school board trustees and president of the board David Mawhinney were met with no response.”

The Tyee article included this context about Isidorou as well:

“He worked as an organizer with the People’s Party of Canada led by anti-immigration hardliner Maxime Bernier, but in 2019 publicly denounced the populist party for moving, he said, too far right on social issues. The PPC was attracting people with ‘a racist bent’ in B.C., he said upon quitting.”

And: “Isidorou publicly denounced Trump in a tweet on Jan. 6, 2021, the day pro-Trump supporters, whipped up by baseless claims of a rigged election and many of them white supremacists, stormed the U.S. Capitol.”

If the NPA and Isidorou are now wanting to provide further context, here are some questions still outstanding:

Why did Isidorou make the hand gesture?

Why did he make the gesture in concert with others, like him, wearing pro-Trump hats at the anti-Trump rally?

What did Isidorou know about the hand symbol when he made it?

Did he know a campaign on the 4chan site had already advocated pretending that it was a white power signal as means to troll liberals? And that actual neo-Nazi and other white power extremist groups quickly took up the symbol, using it non-ironically?

Was he concerned about how the symbol might be interpreted when he showed it? 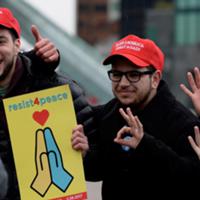 Worries Rise that NPA Board Could Run Extremist Candidates in 2022

What does he make of the fact that on the evening of Donald Trump’s election in 2016 neo-Nazi Richard Spencer posed for a photo making the same gesture in front of the Trump International Hotel in Washington, D.C.?

How does Isidorou feel about the statements his co-NPA director Christopher Wilson has made on Rebel Media, including one defending Donald’s Trump’s response to the Charlottesville, Va. white nationalist rally entitled “Why he’s right and the media is wrong”?

What does Isidorou say about the fact that Vancouver Coun. Rebecca Bligh left the NPA party to sit as an independent over concerns NPA board members held anti-LGBTQ2S+ views?

Would Isidorou support an NPA candidate with alt-right extremist views and to his knowledge would any other members of the current NPA board do so?