President Trump recently congratulated Poland on the 80th anniversary of the Sept. 1, 1939 Nazi invasion that devastated the country and launched the Second World War. Have I missed some sort of revolution in popular custom? Have the usual prompts and protocols surrounding congratulation changed somehow?

Yes indeed, it’s all different now. Our collective house has been lifted into the sky by a Category 5 hurricane — something you have probably never heard of before — and dropped into the magical Land of Backwards, specifically into the heart of downtown Dumbass.

Now, like Trump, you congratulate people and nations only on the most inappropriate occasions. The terrible progress of Hurricane Dorian may yet lead to a message of presidential congratulation to the Bahamas. Worse, forecasters fear Trump may eventually congratulate Florida and the Carolinas as well.

Based on the new Trumpy etiquette here are some people to whom you might wish to send plaudits and flowers this week:

Seven weeks out from election day, the NDP has nominated candidates in roughly half of federal ridings. On Tuesday, a rebellion broke out in New Brunswick as 14 former NDP candidates defected to the Greens.

Even considering the thoroughly hypothetical nature of NDP candidacy in New Brunswick these days, that can't be good. Recent national polls show the New Democrats solidly ahead of... well, Maxime Bernier. And toothaches. And maybe the Greens, for now. If Poland gets a mylar balloon bouquet this week, surely the NDP leader should receive at least a congratulatory box of melted Creamsicles.

A big hand to the Conservative leader for standing tall in the face of damaging attacks by his sworn enemy, Andrew Scheer. Liberals recently dug up an old speech Scheer made in the House, decrying the evils of same-sex marriage. Conservative supporters cried foul. In the end, they argued, is nothing sacred? Have we truly reached the point in this country where politicians can be smeared with prepared speeches they once delivered on camera in the House of Commons? A supportive pat on the back and a friendly, totally non-sexual chuck under the chin for Mr. Scheer. In lieu of flowers and candy, maybe send along some power tools.

Finally! U.K. prime minister at last! A dream realized — standing before the House with all the dignity and authority this great office conveys, addressing Parliament, accepting their respectful jeers and rude noises, watching in mid-speech as one of your MPs crosses the floor to sit with the Liberal Democrats, trying not to lose your place in your prepared remarks as you mentally calculate the new voting tally and realize you no longer have a parliamentary majority, followed soon after by a public ass-kicking in which 21 of your own MPs vote against you, triggering a process that could well make you a badly-coiffed historical footnote. Feliz fracaso, prime minister! A CandyGram coming your way, probably from Theresa May.

A new report commissioned by the Jason Kenney government recommends, among other things, pay cuts for Alberta nurses. Finally, an end to all those embarrassing dinner conversations with out-of-province colleagues about how it is that you can afford to order an appetizer. The report also suggests closing some post-secondary institutions, as well as instituting tuition hikes. Hey Alberta millennials, aren’t you tired of being called lazy slackers? Thanks to new tuition rates and Alberta’s recently rolled-back student minimum wage, you’ll be too busy flipping burgers to listen. Lucky devils!

Your current win-loss record of 1-9 would be considered a very promising result for the Green party. Kudos! 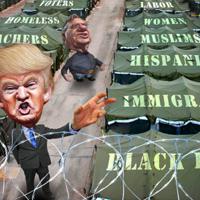 Please Advise! How Much Worse Can Donald Trump Get?

Scientists recently confirmed the likely cause of the great Silurian extinction event of 420 million years ago (long before there were any dinosaurs to kill off). Turns out it was rapid ocean deoxygenation. Almost a quarter of marine species disappeared. This event was eventually followed by drastic climate change.

This time around the order may be reversed as we get the climate change first. Future scientists (if any) will study the data, examine news stories about Brazil’s president Jair Bolsonaro not accepting French assistance for Amazon fires until the French president apologized for insulting him, and conclude that the cause of the mass extinction was: man-babies. However it works out, big thumbs-up to extinction! You are on a roll, son!