Steve Burgess is an accredited spin doctor with a Ph.D in Centrifugal Rhetoric from the University of SASE, situated on the lovely campus of PO Box 7650, Cayman Islands. In this space he dispenses PR advice to the rich and famous, the troubled and well-heeled, the wealthy and gullible.

Have we hit bottom in the Trump era yet? Is there a bottom?

Someone once gave me a daily calendar that featured dumb George W. Bush quotes on every page. The quotes (“I know the human being and fish can coexist peacefully,” etc.) had been collected and then randomly assigned to different days of the year.

An equivalent calendar for Trump could function not as a joke but a historical record. And unlike the Bush quote calendar, the Trump version would not have to randomly scatter its contents. A Trump calendar could — and should — feature only despicable, hilarious and appalling statements, actions and events that happened on that very date, day after day, week after week, month after month. Would any page be blank? Doubtful. There are print-worthy horrors every day. Every. Fucking. Day.

A year and a half of the Trump administration has been comparable to 100 million years of geologic history. In the fossil-hunting game, scientists must patiently dig through layers and layers of sediment laid down over millennia to find evidence of earlier times. With Trump the process has been insanely accelerated, with layers of slapstick idiocy, malignant narcissism, jaw-dropping ignorance and naked racism accumulating hourly. It’s a new Cretaceous, a complete Jurassic, every week. Those who wish to cite Trump-related horrors are almost required to grab from the top of the pile. Last week's awfulness is already buried six layers deep.

Putting immigrant kids in concentration camps, Trump officials saying cages are not cages, Trump saying it’s all happening because of some terrible Democratic law, Trump doing a 180 next day saying he’s happy about the tactic if it keeps foreign vermin out of the country, Homeland Security Secretary Kirstjen Nielsen saying “Congress alone can fix it,” Trump spokestroll Corey Lewandowki on Fox sneering at the plight of a 10-year-old immigrant with Down Syndrome separated from her mother, Trump doing yet another flip and reversing the Trump policy that he had until then been vehemently insisting was not a Trump policy — that was one week.

No, check that — it was a slice of one week. There was also Space Cadet Trump announcing the new Space Force (Pew! Pew!) about which Trump said “There is no place like space,” Trump's bizarre ramble about scheming Canadians covertly buying American shoes, his lies about the German crime rate, his claim to have been exonerated by the Mueller probe, and we are out of days.

There’s much more, but we just don’t have the calendar pages. “Sufficient unto the day is the evil thereof,” says Jesus in the Gospel of Matthew. Which brings to mind Attorney General Sessions trying to justify jailing children by quoting the Apostle Paul but didn’t I just tell you we are OUT OF CALENDAR PAGES? Stop already. We’ll be here all night.

Hey, remember Trump's showdown with the G7 and his bizarre attack on Prime Minister Trudeau? We were so innocent back then. Good times.

(Just as an aside, how is it possible that a decent human being like Anthony Bourdain can suffer from severe depression, while someone who looks in the mirror every day and sees Corey Lewandowski goes off to work whistling a happy tune?)

Hillary Clinton once called Trump’s hard core supporters a “basket of deplorables.” We now know it isn't a basket — it’s a Grand Canyon. But then America has long been the land of opportunity, where immigrants can come and work hard so that someday their children and their children’'s children can blame immigrants for America’s problems. 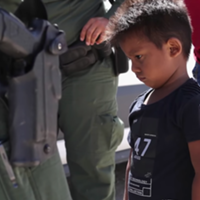 Sending covert signals to racist supporters is often described as “dog-whistling.” But who needs whistles? Just stand on the lawn and yell. Trump’s dog is named “Infested with Vermin.”

Paleontologists can find evidence of catastrophe in layers of rock. A thin line of charcoal or volcanic ash, a subsequent absence of fossils — these speak of calamities past.

How will the Trump era be recorded? I suppose that depends on who survives it — humanity, or Corey Lewandowski.