Where is Kurt Vonnegut when you need him?

I mean, what a mistake Justin Trudeau and the Liberal party are.

They aren’t dreaming about a world for their grandchildren.

That’s the thing about Liberals.

They don’t even know what an emergency is.

They want to trash the joint as badly as their Conservative buddies, but with a bouquet of plastic words.

The only difference between Conservative Leader Andrew Scheer and Trudeau is that Justin will tell you he “cares about the environment” before sticking the climate in the eye with pipelines and tankers.

When any politician tells you they care about the environment, put on your gas mask and run like hell.

Now pay attention to this part, because people will be writing jokes about this for years.

You just can’t make that stuff up.

That just might grow the economy and become the Liberals’ next health platform.

Did I mention that the pipeline expansion will cost Canadian taxpayers at least $9.3 billion, on top of the $4.5 billion already spent to take the existing pipeline off Kinder Morgan’s hands?

How many low-carbon trains could you build with that kind of money?

Meanwhile, Ottawa celebrates its promise of a $200-million “innovative emerging renewable power program” as a response to the emergency.

Here’s another thing: Trudeau swears profits from the pipeline will help pay for the transition to a green economy and other malarkey.

Fat chance that will happen.

Here’s what Natural Resources Canada says: the industry paid only $6 billion in 2006, falling to less than $2 billion by 2016.

Taxes from pipelines weren’t much over $1 billion in 2016. Not enough to build a hospital let alone supply First Nations with fresh tap water.

Trudeau will be fighting his “national climate emergency” with diddly-squat from a pipeline.

Maybe that’s what innovation means: doing nothing with diddly-squat.

The oil and gas industry is all about diddly-squat these days.

The fracking industry now spends more money than it makes, says the Wall Street Journal, and that’s a believable paper.

British Columbia and Alberta are now subsidizing the fracking industry with tax breaks, subsidies and lakes of free water to make diddly-squat for Canadians.

Except for a whole bunch of free earthquakes.

That’s just half of the craziness.

Trudeau says he wants First Nations, among whom child poverty hovers around 60 per cent, to invest in a high-risk $10-billion pipeline expansion over the Rockies.

This is not fake news.

Did you know that Indigenous people didn’t really have a word for poverty until white people showed up and stole everything from them?

I’m going to give you a brief cartoon version of the wonky economics.

Kinder is the kind of guy who compares running an “unsexy, dirty” pipeline business to operating a toll road.

“If you own a toll road, you don’t care how many passengers are in each car or what kind of car it is. You just want as many cars to move down the road as possible, and you make damn certain they pay their tolls, OK?”

A couple of years ago, a Wall Street analyst suggested Kinder wasn’t much a toll road operator and called his company “a capital intensive, cyclical conglomerate with low-to-no growth and an over-levered balance sheet.”

In 2015, Kinder paid another Texan to figure out how much whoopee he could make if he tripled the Trans Mountain pipeline to carry more diluted bitumen to Vancouver.

The report said he’d make some whoopee, but only if oil prices stayed above $100 a barrel, the Canadian dollar stayed on par with the U.S. dollar, and other proposed bitumen pipelines didn’t get built.

That’s a lot of ifs.

When none of those ifs happened, Kinder started to worry, as billionaires do, because low oil prices had hammered his toll pipeline outfit. He couldn’t find enough money to fund Trans Mountain either.

Meanwhile, the cost of the expansion ballooned from $5.4 billion to closer to $10 billion.

Kinder must have prayed for a financial miracle while his company lobbied Ottawa like beavers working over a poplar tree.

And then the miracle happened.

Trudeau woke up one sunny day and declared the project of national interest, because the Chinese threatened that they’d never sign a free trade deal with Canada unless he built a pipeline to the coast.

That’s when Kinder and his former Enron boys started to set off fireworks in Houston.

They sold Trudeau a used and leaky 65-five-year-old pipeline with a 50-year lifespan for $4.5 billion.

Now you know what Pope Francis meant when he said we don’t live in an era of change, but a change of era.

The Pope, by the way, knows what a deep ecological crisis is.

He is no dummy. He called making whoopee with fossil fuels to buy needless stuff a form of home-bashing and soul-crushing.

He said all that four years ago, in a long letter.

If Scheer and Trudeau ever read it, they might have a heart attack.

The Pope wrote this too: “Human life is itself a gift which must be defended from various forms of debasement.”

You’ve got to love people who still believe that.

Do you know what a twerp is?

Here’s what Vonnegut said, and he wrote lots on the subject.

A twerp is a “guy who stuck a set of false teeth up his butt and bit the buttons off the back seats of taxicabs.”

Trudeau is a twerp for asking poor people to pay for a bad pipeline that’s supposed to help Canada fight a national climate emergency.

Come to think of it, Alberta’s Jason Kenney is a twerp too.

You can understand why Kenney is a twerp. He grew up in Oakville, Ont., but started to breathe fossil fuel fumes as a young man when he moved to Alberta, the oily home of freedom.

Sadly, that kind of anointment can affect a man’s development.

Trudeau is different. He grew up a global rich boy in Montreal going to private schools and hobnobbing with the powerful.

But power makes its own religion.

Global rich boys believe the best way to get rich and fight climate change is to grow the economy before the Apocalypse. 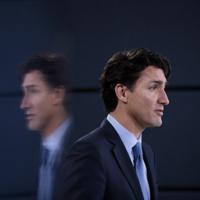 Eight Hard Questions for the PM of Pipelines and Climate Emergency

No point in splitting hairs.

A twerp also doesn’t believe that climate change will create an emergency by packing all of those refugees into downtown Calgary and Houston.

Vonnegut said it first. And he said it best.

And so it goes.