When the National Energy Board announced conditional approval for the Trans Mountain pipeline project in 2016, BC NDP leader John Horgan sent party members an important letter.

Horgan, then opposition leader, said Kinder Morgan’s proposed pipeline expansion and the resulting “seven-fold increase in tanker traffic” would put the interests of British Columbians, salmon and the coastal economy at risk.

Horgan offered the usual bromide about how “a strong economy goes hand-in-hand with a healthy environment.”

But then he made this promise.

“We need to have a credible process to evaluate the risks,” Horgan wrote. “We don’t know what level of risk we’re dealing with on Kinder Morgan because Stephen Harper tailored the NEB to approve pipelines — rather than test scientific evidence or gather public input. Why is [former premier] Christy Clark hiding behind a flawed process created by Stephen Harper?”

Two years later, another flawed hearing run by the same discredited National Energy Board is taking place on the same uneconomic pipeline expansion.

Yet Horgan seems to be in full retreat. The politician who once promised to use “every tool in the toolbox” to protect B.C.’s coastal economy and environment now appears mostly tool-less and toothless.

As premier, Horgan has championed a liquefied fracked gas export industry by showering its earthquake-making developers with tax breaks and royalty credits.

While the Alberta government has spent more than $30 million to bombard the airwaves and Internet with pipeline propaganda, the B.C. government has remained relatively mute.

There are no provincial advertisements about the need for an unbiased made-in-B.C. environmental assessment even though prominent members of the NDP have demanded them in the past.

There are no ads defending orca and salmon populations on the verge of extinction and now facing not a seven-fold but as much as a 20-fold increase in tanker traffic.

There are no ads about the inappropriateness of storing five million barrels of diluted bitumen in the middle of Burnaby.

There are no ads explaining how the main argument for the pipeline — access to Asian buyers that will pay higher prices — is flawed because they represent only 13 per cent of the global market for heavy oil. (North America, meanwhile, accounts for 57 per cent of global heavy oil demand.)

And there are no ads about industry’s shoddy record of cleaning up marine oil spills, let alone diluted bitumen.

What kind of government lets another government spread propaganda about a mega-project without articulating and defending the interests of British Columbians?

Also galling is the government’s new Clean BC plan, which makes no mention of the risk of oil tankers, or the role increased oil sands production, driven by the pipeline expansion, would play in climate change.

Even the conservative International Energy Agency says that the world can’t build any more fossil fuel infrastructure, including LNG plants and bitumen pipelines, if we hope to meet global climate targets.

But the strongest example of backpedalling comes from the dismal “reconsideration” hearings for the Trans Mountain expansion.

In August, a federal Court of Appeal ruling found that the National Energy Board’s troubled 2016 review of the Trans Mountain project was so flawed that it failed to provide the federal cabinet with the necessary information to make a decision on approving it.

The court ruled that the board erred by excluding the impacts of marine shipping on resident killer whale populations. It also found that consultation with First Nations was meaningless.

In response to the ruling, the federal cabinet ordered the board to do an environmental assessment on the impacts of bitumen tanker traffic and a new round of consultations with First Nations. The federal government, which bought the pipeline for $4.5 billion last year, gave the board 22 weeks to complete both tasks.

While many participants have criticized the process for its bias, brevity and narrow scope, the NDP government has sat on its hands.

In other words, Horgan has dropped his toolbox and became a politician missing in action.

Given that the quashing of the federal pipeline certificate also nullified the provincial approval (it too was based on the National Energy Board report, which the courts said was riddled with “successive, unacceptable deficiencies”), Horgan could have pulled out of “the flawed process created by Stephen Harper” and ordered a real provincial environmental assessment.

In 2010, the former B.C. government signed an agreement that handed over responsibility for environmental assessment for five major projects to the National Energy Board, including the Kinder Morgan pipeline. A 2016 B.C. Supreme Court decision found that the handoff wasn’t legal and that the provincial government had a duty to represent the best interests of British Columbians.

That same year George Heyman, then the NDP’s environment critic, accused the Clark government of betraying the public interest and “passing the buck” by not insisting on a “a made-in-B.C. environmental assessment” for the pipeline.

But Horgan and his government have chosen to pass the buck by not insisting on a “a made-in-B.C. environmental assessment.”

When the National Energy Board put Lyne Mercier in charge of the reconsideration hearing, Horgan’s government said nothing while a number of the 64,000 faxed submissions from B.C. citizens highlighted a problem.

Mercier, a former energy CEO and Harper appointee to the board, had to recuse herself from the Energy East pipeline hearing due to conflict of interest allegations.

Along with three other board members, she had met with former Quebec premier Jean Charest, then a paid consultant for the company seeking to build the pipeline.

A 2017 federal report acknowledged the National Energy Board had deeply tarnished its reputation.

“Canadians have serious concerns that the [board] has been ‘captured’ by the oil and gas industry, with many board members who come from the industry that the NEB regulates, and who — at the very least appear to — have an innate bias toward that industry,” the report noted.

But Horgan’s government didn’t challenge another biased process with an artificial deadline conducted by a captured energy regulator.

One of the first big issues tackled by the reconsideration panel concerned basic geography.

Should the National Energy Board only consider impacts of tankers and bitumen spills on orcas within the 12-nautical-mile territorial limit, or should it consider possible effects within the 200-nautical-mile area known as the “Exclusive Economic Zone”?

Almost all the interveners, including the State of Washington, supported the 200-nautical-mile limit for the review. Canada and Alberta argued for the 12-mile limit in assessing risk.

Tankers don’t stop at the 12-nautical mile limit, and spills can happen beyond the arbitrary boundary. Last January an Iranian oil tanker exploded after colliding with a cargo ship in one of the richest fishing grounds in the South China Sea.

The disaster released a million barrels of condensate into the ocean about 160 nautical miles off the coast of China.

But the National Energy Board ignored that evidence and instead ruled that it would stick with 12 nautical miles for its rushed review.

Did Horgan dig into his toolbox and lead a campaign to argue that the scope of the hearing was pathetically narrow?

No. His government filed no specific submission to the National Energy Board on the issue.

“It was disappointing,” said Eugene Kung, a lawyer with West Coast Environmental Law Centre. “On the 200-nautical-mile question, it would have been nice to have had the added voice of the B.C. government.”

But the Tsleil-Waututh Nation acted like a true government. They filed a motion with the board challenging the limited scope of the review and other errors. It warned the board that if it didn’t correct these factual and legal errors, then “further litigation will become more likely.”

The Tsleil-Waututh motion also emphasized that the board had seriously erred by not revisiting the economic case for the project, which was based on a single flawed Kinder Morgan study. Much has changed since then. Project costs have increased, which translates into higher tolls for shippers, which, in turn, undermines the project’s economics. At the same time oil prices have fallen and become more volatile.

The Tsleil-Waututh Nation also said the government’s decision to appoint two new members to the three-person review panel meant oral Indigenous history and tradition evidence presented during the first hearings would not be given proper consideration.

The nation’s no-nonsense motion to the board gave the B.C. government a great opportunity to speak up for British Columbians.

But all it could muster was a two-page letter supporting the nation’s motion and a similar one filed by Living Oceans Society. The provincial government finally mentioned that perhaps the review should extend to possible impacts within the 200-mile limit, as the submissions “raise sufficient doubt as to the correctness of the board’s decision.”

The board dismissed the Tsleil-Waututh arguments and application for review, guaranteeing that the pipeline expansion will face more court challenges.

Saanich-Gulf Islands MP Elizabeth May filed a six-page statement highlighting her constitutional duty to represent what her constituency truly cared about: salmon recovery and killer whales.

The Tsleil-Waututh Nation, which believes a government should represent the interests of its people, didn’t mince words either.

The nation argued that the board couldn’t simply plug “marine shipping into the designated project and run the analysis based on the old evidence… which is stale-dated, inaccurate and therefore unreliable.”

The City of Vancouver talked about the “unacceptable risk of oil spills” and the City of Burnaby itemized the significant threat to public safety, the environment and the coastal economy.

And what did the Horgan government say? It delivered a whimper instead of a salvo.

It submitted a brief letter that said the pipeline should not go ahead. 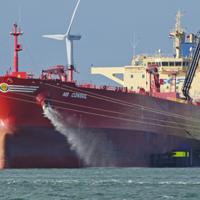 But the next paragraph reassures the board that it wasn’t too concerned.

If the board does approved the pipeline, as it most likely will, the B.C. government asked the board to “attach clear, stringent and enforceable conditions to the certificate” so adverse effects are “mitigated to the greatest extent possible.”

The government’s statement didn’t address the project’s shaky economics, the unfair limits on the reconsideration hearing, the blatant conflict of interest (the owner of a pipeline gets its own discredited board to assess marine impacts), the project’s contribution to climate change or First Nations’ rights.

Actions speak louder than words, and it’s apparent that Horgan has no intention, as he promised in 2017, to use “every tool in the toolbox to defend our coast from the threat of increased oil tanker traffic.