Prime Minister Justin Trudeau just dropped $4.5 billion of taxpayers’ money on a 67-year-old pipeline, with at least another $7 billion needed to finish what the private sector backed away from.

Is this shrewd investment?

Not according to researchers who just published a paper in the prestigious journal Nature Climate Change. The study “Macroeconomic impact of stranded fossil fuel assets” predicts that up to $4 trillion in global oil investments will evaporate as the world transitions to a low carbon future.

The lead researcher of the study, professor Jean-Francois Mercure of Radboud University in the Netherlands, was blunt when reached for comment by Global News.

“This is going to have massive economic consequences… the results in the study for Canada are pretty dramatic.” He added that he believed the long-term prospects for the newly purchased pipeline were “doomed” based on their projections.

Their research indicates rapidly stranded oil assets could destabilize the global economy before 2035. “Our conclusions support the existence of a carbon bubble that, if not deflated early, could lead to a discounted global wealth loss of US $1 to $4 trillion, a loss comparable to the 2008 financial crisis.”

Not only has Trudeau reneged on his pledge in the 2015 election campaign to eliminate fossil fuel subsides, which remain at $3.3 billion, he has now thrown an additional $11 billion of taxpayers money on the table. Regardless of your opinion on climate change (i.e. the laws of physics), this massive public investment in the fossil fuel sector at the end of the age of oil is mind-bogglingly ill advised.

According to the researchers, two gathering global forces are eroding the foundation of the once-unassailable fossil industry.

Emerging disruptive technologies are already reducing global oil demand. China is replacing the equivalent of the entire London diesel bus fleet every five weeks with electric battery buses in an effort to improve wretched air quality in Chinese cities. This single example has already removed 233,000 barrels of fuel per day from global energy demand, propelled by plunging battery prices that are declining by 20 per cent per year.

The other death knell for Alberta’s expensive oil is carbon-limiting public policy from more principled governments elsewhere in the world. Technology alone will disrupt the oil economy, but public interventions are also speeding this transformation. Looking at almost 100 countries worldwide, the authors found that over three-quarters of global emissions are targeted by various climate plans.

The International Maritime Organization, for example, just announced rules taking effect in 2020 that slash the allowable concentration of sulfur in marine bunker fuels to one-seventh the previous level. The international shipping industry is a massive consumer of the world’s oil supply — over five million barrels per day by 2020. As a result of this pen-stroke in Geneva, Alberta could see the so-called bitumen discount triple for its high sulfur product.

Three years ago Vancouver adopted a little-noticed policy to derive all of the city’s energy needs from renewable sources by 2050. While that seems a long way off, this commitment is already affecting infrastructure, procurement and planning decisions decades into the future. All around the world, similar efforts are beginning to gain traction.

As these forces move global energy markets to a tipping point, oil-producing nations may rush to get their reserves to market before it is worthless — a scenario the researchers termed the “sell out.”

While some think that Trudeau is wise to invest public money in this very strategy, it is a race that Canada cannot win. Even if the Trans Mountain expansion gets built, diluted bitumen won’t be flowing until at least 2020. Break-even prices in the oil sands are between $50 and $60 per barrel compared to less than $10 in Saudi Arabia. As the Gulf States begin to flood the global oil markets in the coming decade, Canada’s production is projected to plunge 80 per cent by 2030.

Of all the regions considered in the study, Canada is by far the most exposed country to the growing carbon bubble. Mercure and his team found that Canada could lose more than 20 per cent of its national GDP by 2030 and eight per cent of employment during the chaotic collapse of the Oil Age. 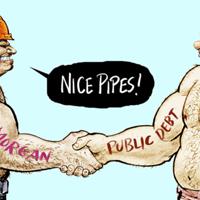 While fossil fuels make up a much smaller absolute proportion of our overall economy, a global carbon bubble bursting will have outsized impacts on many other sectors in Canada such as real estate and financial services. Cumulative GDP losses in Canada could top a stunning US $1.5 trillion by 2035.

Such a nightmare scenario has obvious political implications. The researchers warn of economic upheavals and rise of populist leaders in areas unwisely ill prepared for the gathering storm. Canadians enjoy mocking the political circus south of the border, but hard times breed closed minds. An avoidable economic collapse due to our myopic focus on yesterday’s resources puts at risk every hard-won societal advance of our remarkable nation.

In contrast, countries that have been investing heavily in renewables will benefit from the coming energy transformation. China will see its economy balloon by $3 trillion over the same period.

Kinder Morgan Through the Eyes of The Tyee

They say that all politics are local and lately ours have become microscopic. Yes there is an upcoming election in Alberta, and United Conservative Party leader Jason Kenney may still win. Perhaps Trudeau also wishes to cleanse his family name in Western Canada and is willing to spend billions in scarce public money to do so. The mythical benefits of a “pipeline to tidewater” have been so baked into public discourse that no one seems to notice that 100 per cent of crude tankers exiting Vancouver with oil from the existing pipeline are bound for the U.S., not China.

Outside the tiny crucible of our parochial politics the world is shifting. Basic assumptions of energy needs in the future are out the window. Another study also just published in Nature predicts global energy demand will decline 40 per cent by 2050 in spite of population and income growth.

We live in period of accelerating change. Meeting these challenges will require vision and courage.

Pretending the future will look like the past is not leadership, Mr. Trudeau. Nor is telling people what you think they want to hear and spending billions in tax dollars in the process.