Set aside the political argument for buying the Kinder Morgan pipeline and you’re left with a deal that makes no business sense.

The federal government paid $4.5 billion for the existing Trans Mountain pipeline and the work already done on the expansion that would triple its capacity.

What’s it actually worth? We might know by July 22, the deadline the government has set to try to find a buyer.

But Kinder Morgan Canada’s 2017 annual report says all its pipeline assets are worth $1.03 billion. That includes not just Trans Mountain, but the 111-kilometre Anacortes pipeline that carries oil from Abbotsford to refineries in Washington state and the Cochin pipeline that takes condensate from the North Dakota border to Fort Saskatchewan in Alberta.

The report doesn’t breakdown the values. But together, Cochin and Anacortes can carry about 275,000 barrels a day compared to 300,000 for Trans Mountain.

So, generously, set the actual asset value of Trans Mountain at $670 million.

The purchase also includes the value of work done so far on the expansion, about $930 million by the end of 2017. (Which, is of course, worthless if the expansion doesn’t proceed.)

So, generously, taxpayers are shelling out $4.5 billion for $1.6 billion in assets.

The government does now get to run the pipeline and take the profits.

Again, Kinder Morgan doesn’t breakdown the revenues from the three pipelines. But together they earned $235 million in 2017. Generously set Trans Mountain’s share of earnings at 50 per cent of the total, and you have $118 million in earnings.

Which represents a 2.6-per-cent return on taxpayers’ investment. Not exactly stellar returns for a high-risk investment in an aging asset. (The pipeline is 67 years old; Kinder Morgan estimates the useful life of its pipelines at 30 to 64 years.)

The government — that is, you — also will benefit from the pipeline expansion, if it’s ever completed.

But the expansion is projected to cost $7.4 billion. If Kinder Morgan has already spent about $1 billion, that means government will have to find another $6.4 billion — pushing the cost of the deal over $11 billion.

And that’s likely a low estimate. Four years ago, Kinder Morgan said the project would cost $5.4 billion; it has soared 37 per cent over budget and work has barely begun.

And the issue of the project’s future profitability is still very much in doubt. In February, Mitchell Anderson looked at the business case for the pipeline in a Tyee article and made a convincing argument that it rested on “rhetoric and wishful thinking.”

His position is supported by the simple fact that Kinder Morgan took the chance to bail on the project. If the corporation considered the project had real profit potential, despite the difficulty in getting it built, it wouldn’t have been keen to sell it.

The corporation’s decision was made much easier by Prime Minister Justin Trudeau’s repeated claims that the pipeline was essential for Canada’s future. It’s easy to negotiate with someone who has basically said he’ll pay whatever it takes to do the deal. Kinder Morgan, by halting work and setting an arbitrary May 31 deadline to decide on killing the project, took advantage of the government’s public commitment. And, tellingly, no other private investors stepped up to take on the risk.

Bill Morneau says the government wants to sell the pipeline, and the deal calls for Kinder Morgan to help in finding a buyer until July 22. But if a buyer was in the wings, the government wouldn’t have had to step in. 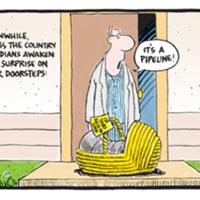 In the National Post, columnist John Ivison reported that the government might make $2 billion on a future sale of the completed pipeline. That was based on a claim by an anonymous “institutional investor in New York.” The investor had set a target share price of $35 for Kinder Morgan if the pipeline was built on the current budget; the government’s payment was equal to $13 a share. So Ivison concluded, it could make $2 billion.

The only problem with the approach is that it makes no sense. The government didn’t buy shares, it bought a portion of Kinder Morgan’s business. There is no practical relation between an imaginary future price and the value of a component business now separated from the corporation.

Especially a component facing a questionable future. Kinder Morgan Canada’s pipeline earnings have been falling — six per cent in two years — while its terminal operations have posted a 20-per-cent increase in the same period. Most corporations are glad to focus on high-growth areas.

The initial cost works out to around $180 for every Canadian taxpayer. Finishing the project — if that ever happens — will cost another $250 per taxpayer.

And right now, the numbers make that look like a very bad investment.