Every day, our cheerful politicians declare that technology will save us from climate change, inequality, artificial intelligence and… well, the list is endless.

For whatever ails society, there is now only one defined cure, and that is more technology.

The Chinese have embraced this deterministic thinking as their state religion.

Last month the China Daily, the official tool of a totalitarian state, announced the launch of another technological marvel: the world’s first all-electric cargo ship.

The innovation, equipped with a lithium-ion battery, can move 2,200 tonnes of cargo 50 miles on a single charge.

Bigger batteries, of course, will move more cargo over greater distances and were said to be coming soon.

China Daily added that the vessel “represents a technological breakthrough as it is the first in the world to use lithium battery in a fully powered cargo vessel running in the inland section of the Pearl River.”

The ship's designer enthused that, “As the ship is fully electric powered, it poses no threats to the environment. The technology will soon be likely used in passenger or engineering ships. ”

Electricity is also cheaper than diesel fuel in China, the designer added.

Environmentalists, who mistakenly believe that green technology is somehow morally superior, also hailed the technology as a planet saver.

“This kind of ship takes into consideration the harmony between humans and nature and can protect water quality and marine life, and should be copied by other ships sailing on local rivers,” a “Beijing environmentalist” told Global Times.

Without a hint of irony, China Daily explained that the ship will mainly haul “coal for the generation of electric power.”

About 75 per cent of China’s electricity comes from the burning of coal, meaning that electric vehicles are in fact running on coal.

Chinese researchers recently calculated that when all factors are included — from manufacturing electric batteries to charging them with coal-fired electricity — electric vehicles create 50 per cent more greenhouse gas emissions than internal combustion engine cars in China.

But no matter. A China Daily headline also proclaimed last month that “China making good use of science and technology to tackle climate change.” 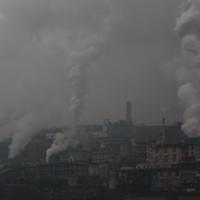 The French prophet Jacques Ellul often warned that efficiency would become a determining factor in technological societies, while justice would be reduced to a slogan.

Technology creates a closed society where a network of techniques modifies people in order to “render them happily subordinate to their new environment,” he wrote.

And in the The Technological Society, Ellul noted technical progress, whether green or fossilized, now dominates all human life and evolves in its own deterministic way according to four rules:

1) All technology exacts a price on human freedom.

2) Techniques create more problems than they solve, and thereby demand the application of more techniques.